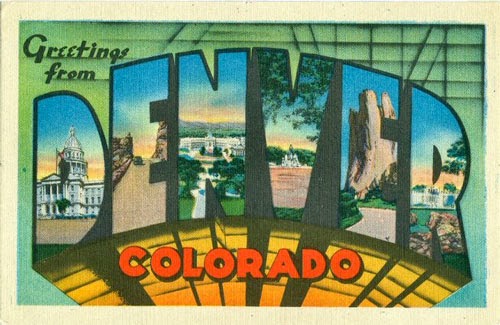 I met Denver at an antique market.

He was flipping through some old prints, the kind I like, and he looked up at me. I was anxious to have a glance...aggressive as always I was probably pushing in on him.


“Sweetheart, I promise. If I find anything you like I'll give you first chance...”

He had me, apologies to Jerry Maguire, at Sweetheart.

Denver was the perfect man. Handsome, but old enough to not use it anymore. Tough as nails, but never towards anyone. Generous. There was no but. He was just generous...of heart and spirit.

She was so perfect. Ugly as a baby beyond all reasoning. But not to us, of course. To us she was stunning.

She was our daughter.

Denver was quite the fella. He bought into all that “hewers of wood” bullshit and somehow...due to his marvellous good looks, he persuaded me to move to Burke's Falls with him and our baby. My parents, for once, were so thrilled. Bad girl gone good. We had never gotten along much, but now I was their Florence Nightingale.

Denver and I had this little thing we would do. We lived in the Falls, but we often would drive down to campsites across Muskoka. One of us would pilot the RV and the other would drive ahead with Sally in the SUV. We always brought both, so we didn't have to pack up shop to go buy groceries or go to the movies.

That particular July trip I was in the RV.

About ten minutes out of the Falls we hit a foggy patch on the highway. I remember thinking Denver should slow down, just seconds before...

I don't know...have you ever had those moments where it seemed the awful, tight fist in your stomach would never go away? That it would linger with you, sometimes more, sometimes less, but forever? That it would haunt you, as a ghost, inexorable? Reminding you daily of that which you had lost. The family that you had been denied.

I don't know what happened after that.

I moved back to Toronto. To an apartment on Jarvis. Nice place, save the cockroaches, mice, loud neighbours and the fact I no longer cared.

I would walk down to Balfour's and slide into the stool every night around six. I would start with a couple of beers, then a Jim Beam or three, then...well then I would drink whatever struck my fancy until they would, finally, ask me to leave.

The days blended. I was running through the insurance policy and the money we had saved like...like...

It no longer mattered.

There is this weird moment when you know you are trying to die. Not suicide. Just suicide.

There were nights I would polish off a bottle of Walker and go home to snort coke with some asshole I didn't even know. I'd meet gals at the Bradshaw and do tequila shots. I would do anything I could.

Anything I could to not think about anything at all.

Angry. The rain angry. You can barely see out the windows of the bus, weaving its way down the tiny road to Malaucen. The Vaucluse.

Rains exceptionally hard, but fortunately this was our stop.

Filing out like the tour driven fools we were, through empty town square to the Hotel Ventoux. Squat and small town, it was what you would expect.

I slid into the hurt bed in the tiny room, alone with a skylight as the only single girl on the tour.

I was, at least, not in Toronto.

Funny, next day in the breakfast room I was pleased to hear that the bridges to the south had been washed out. We wouldn't be going anywhere.

Croissants and coffee. Couples laughing at the delay. The guide all apologetic.

Coming out of the hotel, mist settling on the mountain, looking both ways down empty small town streets.

Malaucen had the central plaza that all French towns do. Lined with tree shaded areas for Boules. This day the old men had all stayed at home.

Seeing the Cafe de la Republique open I left hive and spread across.

Bemused but tolerant locals. Me, straight up to the small bar, sitting down and ordering a glass of wine and a double of whatever they had.

With a wry look, the proprietor probably guessed the rest.

Drowning, dying...the town is not important. The landscape is always the same.

I suppose a relatively young Canadian girl was a bit of an event.

To their credit, the event was smiles and laughs, free espresso and Poire William.

By mid-afternoon...well I was very drunk. I was not feeling particularly mademoiselle.

Looking out I knew it was time to go.

And I would have, but for Lloyd.

Lloyd strode in, late afternoon, grizzled with a faded leather jacket that made him look like some delicious WWII fly-boy. Without hesitation, and with nary an acknowledgement, he slid onto the bar stool beside me and ordered a drink.

Lighting an unfiltered cigarette, he tossed me a half-glance...

“What is your issue?”

I laughed and and tapped my glass on the bar...time for another.

Four blurs to five and fades to six and lingers to seven and....

Lloyd, it turns out, left Hastings four years ago and moved to the south. He lived in small stone farm house, with no farm of course, and painted. I supposed for a living.

“Want to see my studio?”

For Provence it was bracingly cold. Up the winding and very narrow roads of the hillside. Heavy rain beginning again.

His studio is this vast, vault like room above the main part of the house. Who knows what its original purpose was? Lloyd had paintings all over the walls and stacked on the floors. Mostly bizzare. Blurred, disturbing blends of colours. Disconnected images. Eyes isolated, mouths, wilted trees, flames...it sounds derivative, but it was really good.

“Do you sell much?” I asked, flipping through the canvasses flirtatiously.

“I sell nothing” he said with a sideways look, “I do this for me alone”.

Lloyd leaves the studio, off to find what he promises will be the best single-malt I have ever had...

At the bottom of one of his most abstract piles I find them. A strikingly clear painting. A young looking, very beautiful woman, lying on a bright beach, a small boy bouncing above her. Both laughing. Seeming a memory of a perfect moment.

Faces tilted, smiling, smiling at me...

I feel him behind, breath gentle on my neck, saying nothing.

A stillness. The child and the woman. So clearly lost to us now. So clearly...past.