Keep the progressive announcements coming, Tom: An open letter to the Leader of the NDP 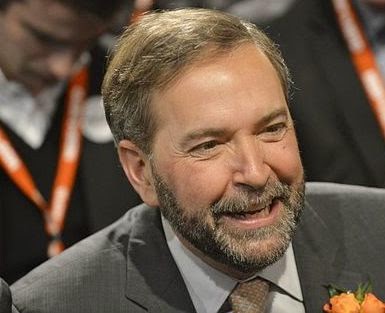 An Open Letter by Simon Dougherty

It’s been great to hear you’ll pull Canadian troops from Iraq if elected. Also, having a Prime Minister who’ll take from the rich and give to the poor will be a great relief to Canadians struggling with record levels of inequality.

These progressive announcements are important pieces of the “compelling new alternative” Jack Layton left for New Democrats to build. As you roll out more announcements in the months before the election, Canadians will “give them a careful hearing; consider the alternatives -- and consider that we can be a better, fairer, more equal country by working together.”

Offering clear alternatives to Harper’s war measures and hopeful alternatives to his austerity measures has the Conservatives stalling, the Liberals slipping, and the NDP surging. But there’s still a long way to go before the election; ample time to give a careful hearing to more alternatives and make them even better. Let’s build on the momentum.

Like that $15/day childcare plan to be phased in over eight years -- let’s go even further and make Quebec's $7/day the Canadian standard immediately. Then, let’s phase in a free and universal program like other countries around the world.

Like that $15/h minimum wage pledge -- let’s make it universal upon election, not just for a small number of federal workers in 2019. American cities like Seattle and Portland are showing $15/h can be achieved right now. Australia passed that threshold five years ago and is on track to hit $19/h in 2019. While strong minimum wages are being put in place, let’s secure living wages with a Guaranteed Annual Income program, like the successful "Mincome" experiment in Dauphin, Manitoba.

Like closing tax loopholes on CEOs  -- recovering $700 million is a good start. Let’s recover another $31 billion by uniting against austerity with Quebec’s second wave of the “Maple Spring.” The World Bank, IMF and OECD admit that inequality is killing growth. Let’s implement a comprehensive set of progressive tax reforms as outlined by Linda McQuaig, the Broadbent Institute and the Canadian Centre for Policy Alternatives. Uruguay has utilized progressive taxes to achieve the greatest income equality in a region that has seen 16 of 18 countries successfully reduce inequality.

Like the urban agenda you introduced in Toronto and Vancouver -- let’s make clear commitments to affordable housing and start moving towards free public transit. Many medium-sized cities across Europe and the Americas have made the transition, already. Cities as large as Paris have experimented with the idea.

Like your promise to establish a national inquiry into Murdered and Missing Aboriginal Women -- let’s build on that by honouring Treaty, respecting Aboriginal sovereignty, working in solidarity with Idle No More, and developing people-to-people partnerships as Canada was supposed to be doing from the start. Consider allotted seats for Aboriginal representation, as is done in New Zealand.

Like that promise to bring in Proportional Representation -- let’s join President Obama in advocating the idea of mandatory voting. Democracy is the NDP’s middle name, and many democracies, from Australia to Greece, already have compulsory voting.

Like your promise to return the retirement age to 65 from 67 -- while we’re making sure Canadians can access the pensions they have earned, let’s make sure they can also access education and prescription drugs when they need them. A universal pharmacare program would save Canada billions. With savings like that we could abolish tuition like Germany and over a dozen other OECD countries.

All of these things have already been accomplished in some place at some time.

Another world is more than possible -- it’s actual. Don't let them tell you it can’t be done!

People will try to tell you that you have no choice but to vote for more of the same. More wars. More oil pipelines. More breaks for mining companies. More small business tax cuts. More corporate ‘free’ trade deals. But you do have a choice, Tom. It’s time to keep the focus where it belongs -- on helping Canadians with living wages, affordable homes, universal childcare and pharmacare, free tuition, public transit, a clean environment, a fair electoral system, the protection of civil liberties, the rejection of austerity, and justice for First Nations, Inuit, and Métis.

C'mon, Tom—together, we can do this.

Simon Dougherty is a former NDP candidate from Scarborough, Ontario. The son of Irish and Slovenian immigrants, he worked in trades and senior care like his parents, and then in education before graduating from York University. Simon has also done work in community organizing and videography. He is currently conducting doctoral research at ACU’s Institute for Social Justice in Sydney, Australia.

Photo via wikimedia commons
Posted by Michael Laxer at 11:31 AM