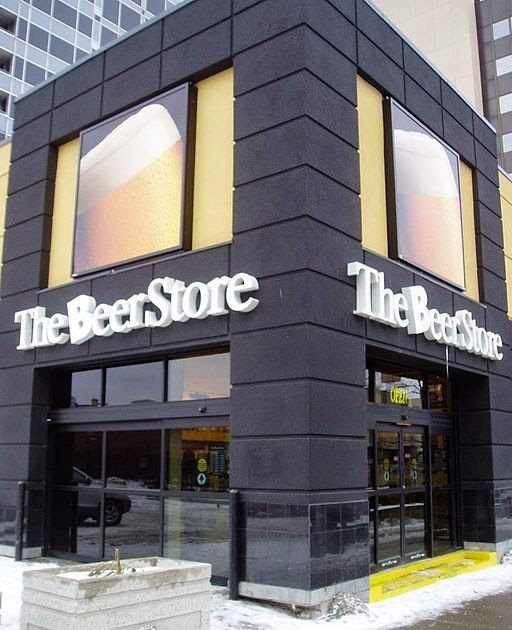 Ontario's "Beer Store" chain has always been something of a curious anomaly.

While Ontarians can buy beer at the LCBO (the government owned retail liquor store) and a handful of other retail outlets, the reality is that close to 80% of all beer sales in the province are at the Beer Store, making it a virtual monopoly.

Contrary to what many people believe, however, the Beer Store is not publicly or even Canadian owned. It is owned almost entirely by two large multinational beer corporations with a third owning a small part as well.

There is some dispute as to whether or not the Beer Store itself makes any money (some have claimed it makes as much as $700 million a year in profits) or whether it is simply a revenue neutral distribution mechanism (as the multinational owners claim), but there is little doubt that its private owners benefit from it.

Otherwise why would they so zealously oppose any attempts to infringe on its turf?

The Beer Store can and certainly seems to favour certain beers to the detriment of the province's smaller or craft breweries. It also sells the cases of 24 beers so popular with consumers while the LCBO does not (by agreement).

Now, none of these breweries will offer up sales figures in relation to their Beer Store sales but consider the sales of the five most popular brands of beer at the province’s other alcohol outlet, the LCBO. The five biggest selling brands of beer in Ontario, all of which are owned by either Molson-Coors or AB InBev, accounted for $193.7 million in sales in 2010, $184.9 million in 2012, and $193.4 million in 2013. And those are just the figures that are available for the LCBO. That is, the place that only sells six packs. Consider what kind of financial windfall is enjoyed by these three big companies when you consider the fact that the store they happen to own (440 of of them to be precise) is the only place in Ontario that you can get beer in larger formats than six packs and is a place essentially custom-designed to tailor to customers who roll in to buy 2-4s of the same beer they’ve been drinking since they were sneaking it from their dads’ fridge in the garage.

As anyone who has shopped in many of these outlets can attest, they are often designed to produce this result, with primarily the best selling beers on the often very "no-frills" retail floor, when there is a retail floor at all, while all the others have to be ordered off of a list on the wall and are hidden away in the storeroom. There can be little doubt the effect this has on sales.

This distribution system should be changed.

The Ontario Liberal government, however, appears to have predictably come up with a plan to do this that will shift beer profits from one group of big corporations to another.

According to reports they may be set to allow beer and wine sales in large supermarkets. while continuing to prohibit sales in smaller grocers and corner stores.

Sadly, this reflects the lack of political imagination and slavish devotion to principles of  private sector dominance that grips our narratives in North America in the neo-liberal era.

Any money it makes (and it is difficult to believe it turns no profit of any kind and clearly money can be  and is made, all over the world, in the "distribution" of beer and wine in a retail setting) would be added to the government coffers that we are constantly told are cash-strapped. While there would, no doubt, be costs associated with making it public, once done it would continue to generate revenue as long as it remained in public hands.

The LCBO generates in excess of $1.5 billion for the government every year, putting the lie to the notion that only the private sector can make money in retail.

Further, as the government, unlike the big breweries, has no vested interest in promoting specific brands of beer, craft and local beers could be featured on equal footing, as they are at the LCBO, which could only have a positive impact on the Ontario craft brewing industry. Shifting sales to supermarkets is unlikely to do this as they are nearly certain to primarily stock the bigger brands.

While making the Beer Store public would no doubt not please those who seek greater "convenience" in beer and wine sales, the government is not looking at a truly convenience based plan anyway, which would obviously be centered around the many of thousands of appropriately named convenience stores in Ontario.

Ultimately, consumer convenience is not  a meaningful or important social or government policy objective anyway.

Instead of making the Beer Store a publicly owned operation, a seemingly unthinkable idea (not advocated for by any political party in the legislature) in an era where governments in general worship at the alter of corporations and where the government in Ontario may be poised to privatize yet more public utilities, we will instead watch as profits are shifted from one set of powerful private interests to another.

photo via wikimedia commons
Posted by Michael Laxer at 12:52 PM