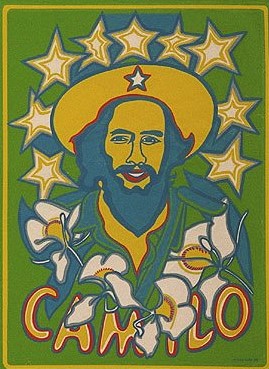 Camilo Cienfuegos was one of the principle revolutionary leaders who, along with Che Guevara and Fidel Castro, helped to bring freedom and socialism to Cuba.

Born in 1932, Camilo was dedicated to the defeat of the American imperialist stooge regime of  Fulgencio Batista and led one of the revolutionary columns that helped liberate the country.

After the triumph of the revolution he became Chief of Staff of the Cuban Army and was instrumental in preventing any immediate resurgence by counter-revolutionary forces.

Famously, during one of Castro's speeches in 1959 Fidel turned to Camilo and asked "Am I doing all right, Camilo?" and Camilo responded "You're doing fine, Fidel". "Vas bien, Fidel" become a Cuban revolutionary slogan and is now emblazoned on a 2009 monument to him in the  Plaza de la Revolución.