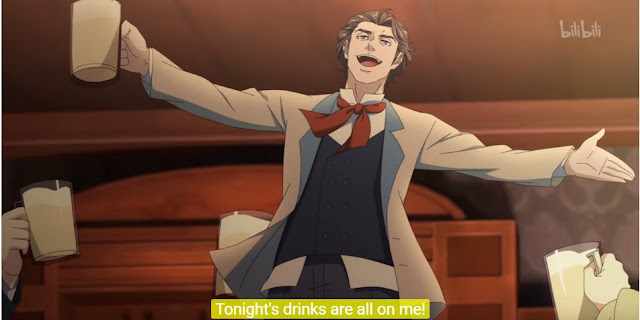 Drinks are on Karl Marx after he bests some aristocrats in a pub debate.

Back in December we posted the trailer for The Leader, a Chinese anime take on the life of Karl Marx.

The first of episode of The Leader is out now and has been posted to You Tube with English subtitles.

After opening with a somber look at Engels speaking at his funeral, the episode seeks to weave aspects of Marx's early personal life (with a large and likely rather fanciful emphasis on his courtship of and romance with Jenny) with his embrace of Hegelian philosophy and his sense of the terrible injustice that existed in the world.

There is fencing, tavern debates, a fancy ball at which Marx is not welcome and an encounter with his father angry at mounting bills due to Marx's spending while at the University of Bonn.

The first episode ends with a song that includes lyrics such as "For the liberation of all peoples I have no choice but to advance - this is very Marx" overlaying a timeline chronicle of Marx's life.

The series has been a big hit in China and further episodes covering his entire life are coming soon.

Watch the episode below: