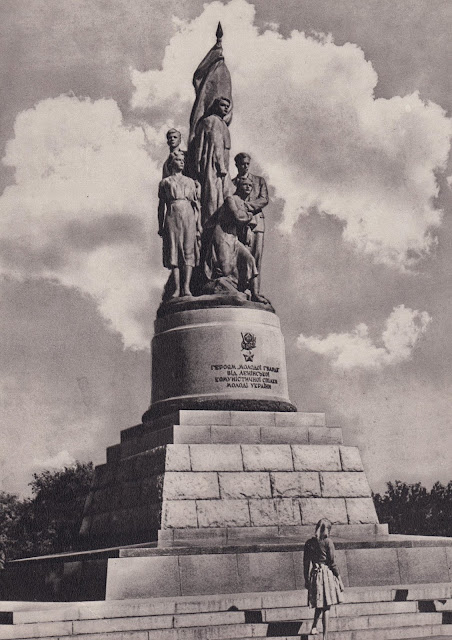 Monument to the Young Guards in Krasnodon
- erected in the Ukrainian SSR, 1954

On February 9, 1943, five heroic leaders and partisans of the Soviet Young Guard in the occupied Ukraine were executed by the Nazis in the city of Krasnodon's central park. Their names were Oleg Koshevoy, Lyubov Shevtsova, Viktor Subbotin, Dmitry Ogurtsov and Sergei Ostapenkov.

The Young Guards had for months been engaged in a campaign of very successful sabotage and resistance against the vile, genocidal Nazi occupiers. This had included the destruction of equipment, liberation of prisoners and erection of Soviet and communist symbols.

In January, 1943 the Young Guards were betrayed to the Nazi authorities and over 70 of them were captured and tortured. Almost all were brutally killed including some being thrown alive into a deep coal mining shaft. The final five martyrs and leaders killed on this day were memorialized with not just the monument pictured here but with stamps, movies and books after the war in the USSR as the heroes they were.

A mere five days after their deaths the town was liberated by the Red Army.

It is worth noting that the new Ukrainian government has torn down and made illegal monuments such as this where they are in control while erecting new monuments to nationalist Nazi collaborators instead.

Posted by Michael Laxer at 7:04 AM