"Nothing moved but the tide" - Seattle General Strike Begins February 6, 1919 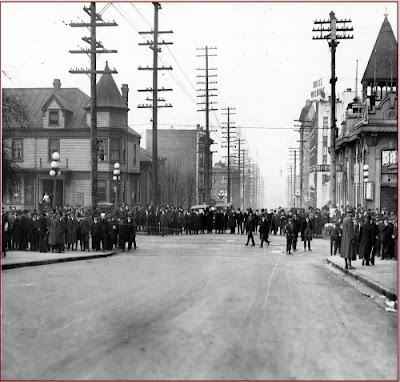 While the Seattle General Strike ended after only 5 days it remains a pivotal event in American labor history.

On the morning of February 6, 1919, Seattle, a city of 315,000 people, stopped working. 25,000 union members had joined 35,000 shipyard workers already on strike. The city's AFL unions, 101 of them, had voted to walk out in a gesture of support and solidarity. And most of the remaining work force stayed home as stores closed and streetcars stopped running. The city was stunned and quiet. While the mayor and business leaders huddled at City Hall, eight blocks away the four-story Labor Temple, headquarters for the Central Labor Council and 60,000 union members, hummed with activity. An elected Strike Committee had taken responsibility for coordinating essential services. Thousands were fed each day at impromptu dining stations staffed by members of the culinary unions. The teamsters union saw to it that supplies reached the hospitals, that milk and food deliveries continued. An unarmed force of labor's "War Veteran Guards" patrolled the streets, urging calm, urging strikers to stay at home. On the second day, the Mayor threatened to declare martial law and two battalions of US Army troops took up position in the city, but the unions ignored the threat and calm prevailed. "Nothing moved but the tide," remembered a striker years later.

Against the backdrop of the recent Russian Revolution the strike terrified the ruling classes across the United States.

In her famous editorial that spoke of the power of the workers united, communist activist and journalist Anna Louise Strong wrote at the time:


The closing down of Seattle's industries, as a MERE SHUTDOWN, will not affect these eastern gentlemen much. They could let the whole northwest go to pieces, as far as money alone is concerned.
But, the closing down of the capitalistically controlled industries of Seattle, while the workers organize to feed the people, to care for the babies and the sick, to preserve order—this will move them, for this looks too much like the taking over of power by the workers.
Labor will not only Shut Down the industries, but Labor will reopen, under the management of the appropriate trades, such activities as are needed to preserve public health and public peace. If the strike continues, Labor may feel led to avoid public suffering by reopening more and more activities.
UNDER ITS OWN MANAGEMENT.
And that is why we say that we are starting on a road that leads – no one knows where!

If the strike continues, Labor may feel led to avoid public suffering by reopening more and more activities.

UNDER ITS OWN MANAGEMENT.
And that is why we say that we are starting on a road that leads – no one knows where!

You can read more about the strike, its legacy and the crackdown that followed at:

The Seattle General Strike Project
Posted by Michael Laxer at 8:45 AM