International Day of Action in Solidarity with Venezuela, Saturday, February 23 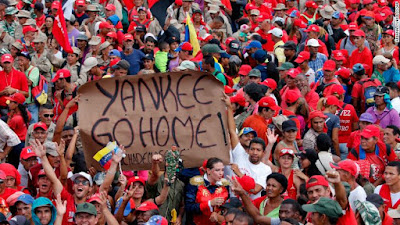 On Saturday, February 23 dozens of rallies, protests and actions are being planned around the world in solidarity with the people of Venezuela to mark the one month anniversary of the start of the ongoing imperialist attempt at a coup in the country.

Despite pressure and threats of violence from the Trump Administration and its right-hand partner in the Trudeau government in Canada -- as well as a variety of lackey governments in the Americas and Europe -- so far the people of Venezuela have stood up to the blockade and the undemocratic attempt to install American stooge puppet Juan Guaido.

The impressive list of solidarity actions ranges from Albany, New York to Winnipeg, Manitoba alphabetically and are occurring in North and South America, Europe, India, Australia and elsewhere.

According to the page the following actions are being planned in Canada (with links to event pages where available):

No Sanctions! Hands off Venezuela! No military intervention!
Saturday, February 23 | 12pm
Gather in front of the CBC at Georgia and Hamilton Streets
Rally organized by the Venezuela Peace and Solidarity Committee of Vancouver

The participants and endorsing organizations of the February 23rd “No War On Venezuela” rally in Toronto demand that the federal government immediately recognize the democratically elected president of Venezuela, lift the sanctions, and stop laying the groundwork for military intervention. CBC: stop the lies! Bay street: not your gold, not your oil, hands off Venezuelan soil!

No war on Venezuela!
Saturday, February 23 | 12pm
Gather at the Prime Minister’s office for a march to the U.S. Embassy!

No war on Venezuela!
Saturday, February 23 | 1pm
Peace and Freedom Park (formerly Cornwallis Park) | Hollis St
Organized by Alliance for Venezuela Halifax and is co-sponsored by the Halifax Peace Council

For links to an extensive array of articles about the situation in Venezuela and its background see The Left Chapter's last four weekly news and information round-ups here, here, here and here.

How the U.S. Is Strangling Haiti as It Attempts Regime Change in Venezuela

The Trump-Trudeau Venezuelan 'Lima Group' Policy and Its Nemesis

In Venezuela as in Chile, what is past is prologue

Which of these countries is not like the other? -- A Justin Trudeau and Chrystia Freeland Imperialism Quiz!

Posted by Michael Laxer at 3:59 PM