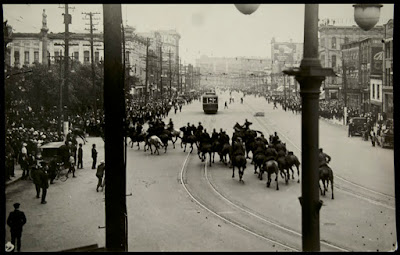 Today is the 100th anniversary of Bloody Saturday, June 21, 1919, when police violence and brutality against the people of Winnipeg and strikers led to the deaths of  Mike Sokolowski and Mike Schezerbanowicz and the wounding of dozens of others. In the aftermath of this attack the Winnipeg General Strike ultimately failed in the short term though its long term impact and significance has been profound.

The strike also lives on in our memory as one of the great moments in Canadian labour history and in the history of Canadian working class resistance.
Posted by Michael Laxer at 7:14 AM

Email ThisBlogThis!Share to TwitterShare to FacebookShare to Pinterest
Labels: Winnipeg