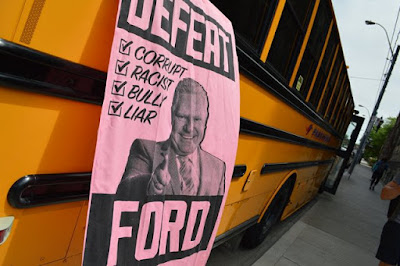 Why?  According to Thomas "Ford Fest is a chance for real people to have a hamburger and a conversation with Ford – we think the people might even talk some sense into him." Thomas states further “It’s never good when the premier of your province is so unpopular that he gets booed out of a celebration. I’m not at all surprised; a lot of Ford’s policies have hurt a lot of people. But I’m not one to kick him while he’s down, either.”

While Thomas is certainly correct that Ford's vicious, silver spoon, anti-worker austerity agenda has "hurt a lot of people", now as the Ford government reels from backlash to its brutality and ugliness and as Ford's popularity plummets is exactly when we need to keep "kicking" him and his government on all fronts.

This silly notion that somehow people are going to "talk sense" into Ford over a hamburger -- or at a meeting at Queen's Park for that matter --  is beyond farcical. The idea that we should somehow feel bad for Ford or give him a break because he is "down" is entirely wrong-headed. Both these ideas are based on the false fantasy that Ford and his ilk can be reasoned with and made to see the harm they doing.

They know the harm they are doing. Their agenda is completely based around doing harm in the interests of corporations and the wealthy. The only thing that is going to stop them is an unrelenting mass mobilization and protests in the streets that will work to destabilize and demoralize their government and force them to retreat.