Don't let the Americans lie their way into another disastrous war 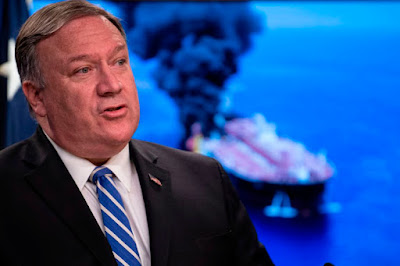 As the hawks in the Trump administration try to build the case for war against Iran it is worth reflecting on the countless lies that the United States has used over the decades to justify conflicts that have killed millions of people.

Given that Trump himself apparently "said 10,796 things that were either misleading or outright false" during his first 869 days in office it is pretty clear that a critical approach should be taken to anything his administration asserts on any front. Yet we have already seen that despite this culture of lies the American mainstream media and Democratic politicians almost all got on board with Trump's attacks on Venezuela and have stayed on board even after various incidents -- such as the fabricated burning of aid trucks on a bridge from Colombia -- were proven to be false.

When it comes to its imperialist adventures in the interests of American business and capital abroad, however, there is almost always unity within the American ruling political class and its pundits.

Now Trump's bombastic, truth averse Secretary of State Pompeo -- fresh off of implying that the United States would intervene in upcoming British elections to prevent a victory by Jeremy Corbyn -- is trying to use an alleged attack on Japanese oil tankers in the Gulf of Oman as justification for action against Iran that could easily escalate into full blown war.

Already Pompeo's claims regarding this incident are being thrown into doubt by the owner of the tankers himself. "Company president Yutaka Katada said Friday he believes the flying objects seen by the sailors could have been bullets. He denied any possibility of mines or torpedoes because the damage was above the ship's waterline. He called reports of a mine attack "false.""

When placed in historical context, moreover, it is impossible to escape the likelihood that whatever happened in the Gulf of Oman, the version we are getting from the Trump administration is almost certainly untrue.

The most obvious parallel is with the Gulf of Tonkin incident in 1965 that was used by the Johnson administration to greatly escalate the war in Vietnam. It is widely known now that the incident was fabricated and as a US Navy Lieutenant Commander put it in an article for the US Naval Institute, it is "clear that high government officials distorted facts and deceived the American public about events that led to full U.S. involvement in the Vietnam War."

Then there was the allegation made in 1990 that Iraqi forces had removed babies from incubators in Kuwaiti hospitals and left them to die on the floor that was used as one of the major propaganda points to get Americans on board with the first Iraq War. The problem was, of course, that is was totally made up and the 15 year old girl "Nayirah" who tearfully recounted it to the Human Rights Caucus of the US Congress was actually the daughter of the Kuwaiti ambassador who had been coached by a public relations firm to lie to the caucus.

Not to be outdone the Bush administration notoriously lied its way to the second war on Iraq. This is so well known that there really is no need to belabour it, but two key things to remember are the entirely false assertions that were made by the then Secretary of State Colin Powell to the United Nations in 2003 and the fact that John Bolton, now the national security adviser to Trump, was a major hawk calling for war with Iraq back in that administration.

Given this long and sordid history of imperialist lies and fabrications by the Americans over the decades, and given the fact that the Trump administration has a proven track record of lying on an almost daily basis about even minor issues, it is astounding that anyone would take anything Pompeo says seriously.

One does not have to embrace or be an apologist for the Iranian regime to know that a war in Iran would be catastrophic for the Iranian people. Given the terrain and the strength of the regime it would likely make the war in Iraq -- which has destabilized the entire region -- look relatively mild in comparison. It would be certain to result in the deaths of hundreds of thousands, if not millions of people, and lead to further destabilization and radicalization in the Middle East. American forces would likely have to occupy the country for many years. They are still in Afghanistan 18 years later.

It is imperative that the Americans not be allowed to lie their way into another terrible conflict.

Posted by Michael Laxer at 7:44 AM