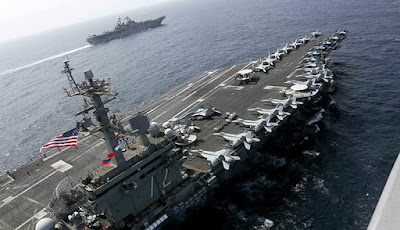 1) Remember the Vincennes? The US’s Long History of Provoking Iran

That’s the name of the U.S. Navy warship that shot down an Iranian airliner with missiles in 1988, killing all 290 people aboard that airplane.

2) Iran - unrepentant warmongers and gullible fools are at it again

You would think Iraq never happened. Suddenly we are told that there is intelligence to prove that Iran was responsible for the attacks on two tankers in the Strait of Hormuz, the narrow and extremely busy channel between Iran and the Arabian Peninsula. This intelligence comes from the US security services, and seems largely to consist of one grainy video of a boat removing a landmine from a ship, plus the negative assertion that only a state actor could have carried out the attack.

Iran has shot down a US military drone using a surface-to-air missile, Iranian and American military officials said, amid an escalating row over alleged attacks on oil tankers in the Strait of Hormuz. 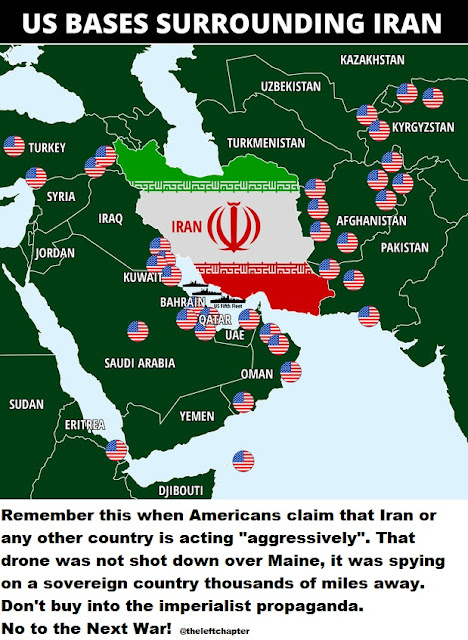 US President Donald Trump authorized military strikes against Iran Thursday before unexpectedly cancelling them, the New York Times reported. The abrupt move leaves open the imminent possibility of a major new war in the Middle East with the potential to kill millions and spark a global military conflict.

(Related: Don't let the Americans lie their way into another disastrous war)

On May 27th, Europe awakened to what seemed to be like a new stage in the resurgence of the populist right and reactionary forces, and a major retreat for the radical left in the elections to the European parliament.

Stephen Smith worked at an AT&T call center in Meriden, Connecticut, for over 20 years before the giant telecoms company announced it was closing the city’s three call centers in February 2019. 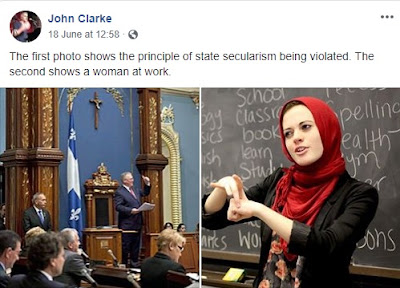 Canadian corporations failed to pay between $9.4 billion and $11.4 billion in taxes in 2014, according to the first comprehensive analysis of the country's corporate "tax gap" — the difference between taxes legally owed and those collected — being released today by the Canada Revenue Agency.

During what was probably one of the most exciting and gratifying moments of his professional life, moments after the Raptors’ NBA finals victory on Thursday, a California sheriff’s deputy stopped Raptors president Masai Ujiri from walking onto the court for the Raptors’ trophy presentation. The deputy carded him and asked him for his credentials.

Saturday will see up to 1,500 people attending a gig in Kiev headlined by notorious U.S. neo-Nazi group Blue Eyed Devils. Even an expert on the far-right music scene is shocked how open Fortress Europe is being.


10) Not on Our Side: On Bernie Sanders and Imperialism

Bernie Sanders presents himself as an anti-war candidate. But he has voted in favor of almost every single U.S. military intervention in the last two decades. A look at his record.

11) Biden doubles down on segregationist comments, says critics like Cory Booker 'should apologize' to him

Joe Biden on Wednesday doubled down on his statements about working with segregationist senators, telling reporters that he has nothing to be sorry for.


12) Two Weeks After Massacre, Sudanese Set to Reclaim the Streets

Protesters in Sudan are set to reclaim the streets again, barely two weeks after their mass sit-in demonstration outside the army HQ in Khartoum was cleared with a massacre of at least 128 people.

President Juan Orlando Hernandez (JOH) announced orders to the Honduran military Thursday to deploy to all parts of the country to stamp down the ever-widening protests against the neoliberal policies of his administration. This follows an overnight emergency session with his National Defense and Security Council after a violent night of protests turned deadly.

The Workers Unitary Central (CUT), the National Association of Fiscal Employees (ANEF) and the Student Confederation of Chile (Confech) are all on strike Thursday against President Sebastian Piñera's right-wing government, demanding better pay, more funding and a state-based pension system.

Talking to the people in Youngstown, Ohio, that the national media usually ignores.

The non-state sector in Cuba is already registering a significant blow as a result of the U.S. sanctions implemented by President Donald Trump, with craftmanship dropping by about 60 to 80 percent in sales, according to local media.

A new International Monetary Fund (IMF) study shows that USD$5.2 trillion was spent globally on fossil fuel subsidies in 2017. The equivalent of over 6.5% of global GDP of that year, it also represented a half-trillion dollar increase since 2015 when China ($1.4 trillion), the United States ($649 billion) and Russia ($551 billion) were the largest subsidizers. 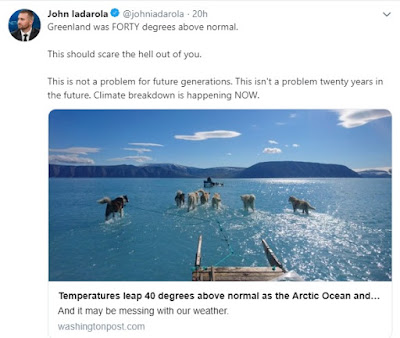 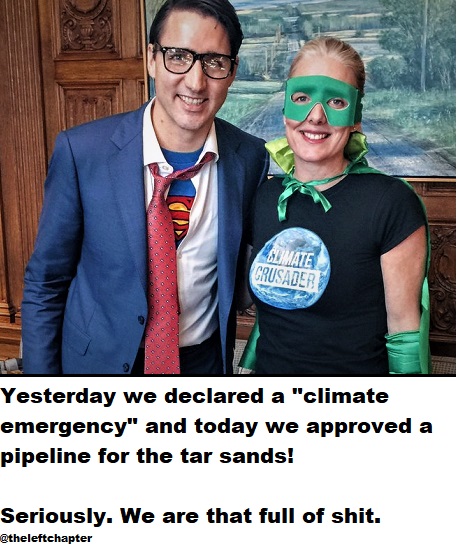 In one of the coldest places in Canada, Steve Kokelj is searching for Arctic thaw. He's driving the great Dempster Highway, 747 kilometres of gravel linking southern Canada to the Arctic.

22) India is running out of water, fast

At least 21 cities in India, including capital New Delhi, Bengaluru, Chennai and Hyderabad, will run out of groundwater by 2020, affecting around 100 million people.

Road salt levels in southern Ontario waterways have hit record highs, making some as salty as the ocean, environmental advocates said Wednesday as they called for measures to mitigate the impact on species and ecosystems. 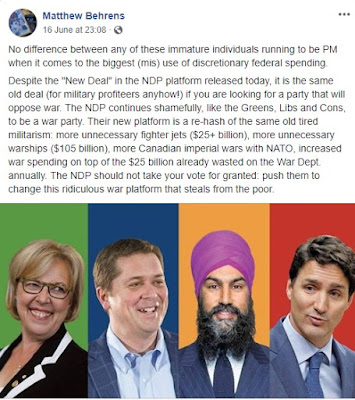 A report from Missouri’s attorney general shows that black drivers across the state are 91 percent more likely than white motorists to be pulled over by police and newly collected data shows that African-Americans are even more likely to be stopped in many communities where they live.


25) 'Take your charge like a man': Baltimore police video shows takedown of bystander that led to officer's arrest

When Baltimore police Sgt. Ethan Newberg told fellow officers to arrest a bystander who criticized their tactics as they detained another man, the 24-year veteran of the department said the pedestrian had been “interfering.”

26) 'Hands up, buddy. You're going to die': Violent Edmonton arrest under investigation

The conduct of a group of Edmonton police officers is being questioned after a video posted online appears to show an officer repeatedly kicking a suspect before slamming him head first into a wall.

27) “I Thought We Were Going to Be Executed”: Police Held Family at Gunpoint After 4-Year-Old Took Doll

An African-American family is suing the city of Phoenix, Arizona, after police held them at gunpoint because their 4-year-old daughter had allegedly taken a doll from a Family Dollar store. In a video that has since gone viral, officers point guns and yell at the family, and one officer even threatens to shoot the 4-year-old girl’s father, Dravon Ames, in the face. The girl’s mother, Iesha Harper, is heard saying she is unable to hold her hands up because she is holding a child and that she is pregnant. Phoenix’s mayor and police chief have both apologized for what happened, and criticized how the police officers handled the situation. Activists in Phoenix say this is just the latest incident in a police department plagued by issues of police violence and killings. Last year, the city had 44 police shootings, nearly double that of the previous year, and led the nation in police shootings among cities of its size. We speak with Dravon Ames and Iesha Harper, as well as a family spokesperson, Rev. Jarrett Maupin. On Monday, the couple filed a $10 million lawsuit against the city.

The Philadelphia Police Department announced Wednesday it had taken 72 officers off the streets in response to the discovery of thousands of offensive social media posts by the officers, including violent messages and racist memes. The officers were placed on desk duty as the social media scandal brews, implicating more than 300 officers of the city’s 6,500-officer police force. “We’ve talked about from the outset how disturbing, how disappointing and upsetting these posts are,” Philadelphia Police Commissioner Richard Ross said Wednesday. “They will undeniably impact police-community relations.”

An Indigenous woman is suing a B.C. RCMP officer she says interrogated her in March 2012 when she reported a sexual assault.

30) Three months in jail for cotton candy? Inside the nationwide crime lab backlog

There's a growing backlog at crime labs nationwide that's leaving victims waiting for justice: A recent government report found the backlog for DNA analysis increased almost 85% from 2011 through 2017. "CBS This Morning" got a rare look inside the Arkansas state lab, and spoke to one woman stuck behind bars because of the backlog.

Meet the hired gun Ottawa is using to overthrow the Venezuelan government.

The political party of Juan Guaido — Voluntad Popular (Popular Will) — was never all that popular to begin with. The sixth largest political party in Venezuela, Popular Will is heavily financed by the United States Agency for International Development (USAID). Now, a recently exposed embezzlement scandal in Colombia risks to further alienate the party from the Venezuelan people.

34) Bolsonaro under pressure from within and below

Although the Bolsonaro regime doesn't look like collapsing immediately, its structure and support are waning and the mass movement is growing.

Nearly 300 employees at a GTA autism treatment facility received layoff notices on Monday amid an ongoing reorganizing of autism funding by the Progressive Conservative government.

The day after nearly 300 autism service providers were given layoff notices at ErinOakKids, a centre in Mississauga, the Minister of Social Services, Lisa MacLeod, issued a statement defending the move and warns of more to come.

Some of Ontario Premier Doug Ford's most high-profile cabinet ministers have been moved out of their posts as part of a major shuffle that came amid slumping poll numbers for the premier and controversies on several important files.

Ontario Premier Doug Ford's chief of staff, Dean French, has resigned in the wake of damning reports that the Progressive Conservative government's picks for two patronage appointments had ties to French.

The Saskatchewan government says it will continue to track or seize at-risk babies despite a call to stop from the inquiry into missing and murdered Indigenous women and girls.

42) B.C. CFS moves in to seize 90-minute-old baby on report of neglect

An hour and a half after enduring a C-section delivery at a Kamloops hospital, an Indigenous couple was exhausted but elated as they met their baby girl – a first child for both.

Immigration attorneys said four toddlers, all under the age of 3, were hospitalized last week after spending time at a U.S. Border Patrol facility in McAllen, Texas.

The Trump administration has argued in court it should be able to force detained migrant children to sleep on concrete floors and deprive them of soap and toothbrushes.

45) Why this German city plans to make public transport free

Citizens in Monheim will be able to ride buses without a ticket from April 2020, regional newspaper the Rheinische Post has reported.

“Well, friends, that’s it for today. You have to live in uncertainty and get ahead no matter what it takes. A hug as always, full of dreams and hopes.” – Marta