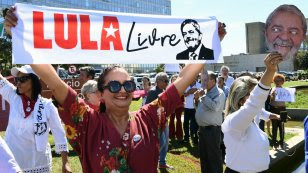 A political crisis is growing in Brazil after The Intercept revealed that the judge who helped jail former Brazilian President Luiz Inácio Lula da Silva likely aided federal prosecutors in their corruption case in an attempt to prevent Lula’s Workers’ Party from winning the presidency. Leaked cellphone messages among Brazilian law enforcement officials and other data obtained by The Intercept point to an ongoing collaboration between Judge Sérgio Moro and the prosecutors investigating a sweeping corruption scandal known as Operation Car Wash. Lula was considered a favorite in the lead-up to the 2018 presidential election until he was put in jail and forced out of the race on what many say were trumped-up corruption charges. The leaked documents also reveal prosecutors had serious doubts about Lula’s guilt. The jailing of Lula helped pave the way for the election of the far-right former military officer Jair Bolsonaro, who then named Judge Sérgio Moro to be his justice minister. We get an update from Pulitzer Prize-winning journalist Glenn Greenwald of The Intercept, whose reporting is based on a trove of internal files and private conversations from the prosecutorial team behind Operation Car Wash.

FORMER BRAZILIAN PRESIDENT Luiz Inácio Lula da Silva should be released from prison and his conviction should be annulled, said Sen. Bernie Sanders, an independent from Vermont, on Tuesday. Rep. Ro Khanna, D-Calif., meanwhile, is calling on the Trump administration to investigate the case that imprisoned the former president on corruption charges, following The Intercept’s exposé that showed Judge Sérgio Moro plotted with prosecutors to convict Lula and prevent the Workers’ Party from returning to power.

4) Lula Is Innocent. Free Him Now.

The evidence is now overwhelming — Lula was the victim of a politically motivated campaign to keep him from returning to power. He must be freed.

A benefits program for Brazil's low-income disabled and senior citizens will be suspended as of June 25, Brazilian President Jair Bolsonaro tweeted Monday, citing a lack of federal funds.

The Brazilian government is struggling to replace more than 8,000 departed Cuban doctors, despite promises made by President Jair Bolsonaro, according to a New York Times report published on Tuesday.

Brazil’s democracy is on the edge of an abyss. Its new far-right government has begun an attack, first against humanities, sociology, and philosophy in general, and then on Brazil’s Public Universities in particular. First it was said that Philosophy and Sociology Programs should be defunded. Then, the government announced a 30% cut in the budget of three Universities, mine included, citing ideological bias. Eventually, the cut was extended to all federal Universities and after that to all public educational system.

The Japanese owner of the Kokuka Courageous, one of two oil tankers targeted near the Strait of Hormuz, said Friday that sailors on board saw "flying objects" just before it was hit, suggesting the vessel wasn't damaged by mines. 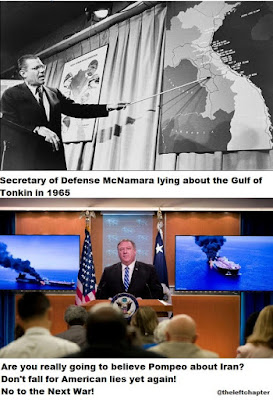 Neither the US nor Iran really wants war we are told, because the reality of such a conflict is too horrific to contemplate. But the Gulf tanker crisis and the US response shows that we are alarmingly close to open hostilities. It is true that there are voices in the US defence establishment calling for restraint. It appears to be the case too that the Iranian government is operating on the assumption that the US doesn't want a war. But there are several reasons why such assumptions are not a sound basis for judgement.

The Communist Party of Greece (KKE) said on Friday that the United States' plans against Iran would bring nothing good for nations in the region and urged for all US and NATO bases in Greece to be closed.

Related: Don't let the Americans lie their way into another disastrous war

US Secretary for State Mike Pompeo has come under fire after a recording emerged of him saying he’d intervene to stop Labour Party leader Jeremy Corbyn becoming Prime Minister. In the recording first reported by the Washington Post, Pompeo suggests he won’t wait for Corbyn to be elected, rather he’ll attempt to stop it from being possible.

The spectacle of the Burmese Nobel Laureate's meeting with Viktor Orban highlights the monstrous threat posed to Muslims around the world.

15) IF IT SEEMS AS IF CANADA’S CONSERVATIVES HAVE LOST IT, GUESS AGAIN: THEY’VE JUST ADOPTED THE TRUMP PLAYBOOK IN ITS ENTIRETY

“Huge pothole on #StAlbert Trail right now! This is a preview of Canada’s future if Justin Trudeau is re-elected as prime minister, as he continues to implement his terrible anti-automobile agenda.”

Imagine making cents on the dollar to toil in a warehouse, separated from the broader society, while repeatedly piecing together widgets or engaging in manual labor for some multinational corporation with which you’ve never interacted. For many Americans, the concept of making nickels and dimes for your labor in the richest nation in human history is incomprehensible. But for the tens of thousands of Americans making far less than minimum wage due to their disabilities, it is an all too familiar reality.

It turns out Rebel Media’s coverage of Jason Kenney is funded with foreign money.

A US jury could not reach a verdict on Tuesday against a border activist who, defense attorneys say, was simply being kind by providing two migrants with water, food and lodging when he was arrested in early 2018.

Developments in Canada this spring have been disturbing. Tory (Conservative) governments have been elected in Alberta, New Brunswick, and Prince Edward Island, joining Tory governments in Saskatchewan, Manitoba, Ontario, and the right-wing CAQ in Quebec.

21) The Left’s Failure to Envision a World Without Capitalism

There is a common saying on the left, usually attributed to the Marxist critic Fredric Jameson, that “it is easier to imagine the end of the world than it is to imagine the end of capitalism.” The late writer Mark Fisher once described this as “capitalist realism,” or the “widespread sense that not only is capitalism the only viable political and economic system, but also that it is now impossible even to imagine a coherent alternative to it.”

Women across Switzerland have taken to the streets to protest against what they say is the country's unacceptably slow pace to equality.

25) The Real Face of Prostitution

The research could make a difference, by providing more evidence of the harms of prostitution, and by helping those struggling with the polarized debate on whether we are talking about “sex workers’ rights” and “women’s agency,” or the commercial sexual exploitation of vulnerable, prostituted people. What is needed, alongside such research, is for every one of us to imagine a world without prostitution, and to ask the question, “Why does it exist?” In a world where women and girls were liberated from male supremacy, in which we could live as equal human beings, prostitution would be starved of oxygen.

I emailed Stephanie Nebehay of Reuters on May 22 about her article, “Venezuela Turns to Russia, Cuba, China in Health Crisis” (5/22/19). Her article depicted the impact of US sanctions as an allegation that Venezuelan government officials are alone in making.

A series of "targeted" and "politically motivated" cuts to legal clinics across Ontario are the provincial government's way of making sure its agenda can't be challenged, says the head of the Hamilton Community Legal Clinic. 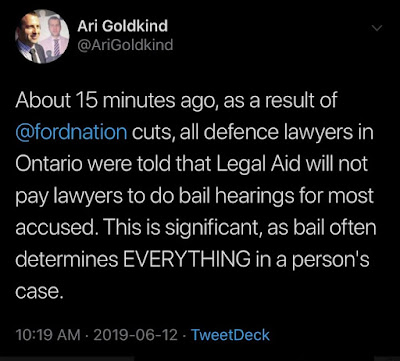 As the fall federal election looms, the strategic voting rhetoric is coming to a boil. Not surprisingly, most of the talk originates with the Liberals who are anxious to erode Andrew Scheer’s lead in the polls.

29) One Million More Reasons to Mobilize Against Ford

The public sector “salary restraint” legislation expected by public sector union leaders was formally introduced on June 5th (Protecting a Sustainable Public Sector for Future Generations Act, 2019). I will get to the criticism in a moment. First, I have to acknowledge the Orwellian chutzpah of this government: without a climate change plan, it cheekily appropriates the language of “sustainability” and concern for “future generations.” They could have topped themselves by tipping their hat to the indigenous traditions they are also ignoring by adding “seven” in front of “generations.” Perhaps the next spending restraint bill can be more inclusive. 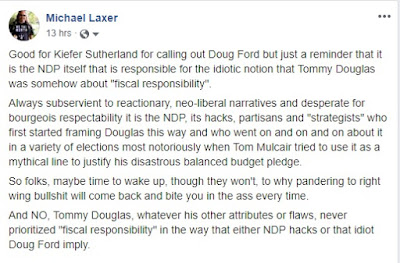 It’s a shame that the reporting on this important report got stuck on one word and became defensive rather than proactive. According to the 1948 convention, Canada is guilty of committing genocide against the Indigenous people.

31) Canada's treatment of Indigenous peoples fits the definition of 'genocide'

I should have anticipated the blowback to the final report of the National Inquiry into Murdered and Missing Indigenous Women and Girls. 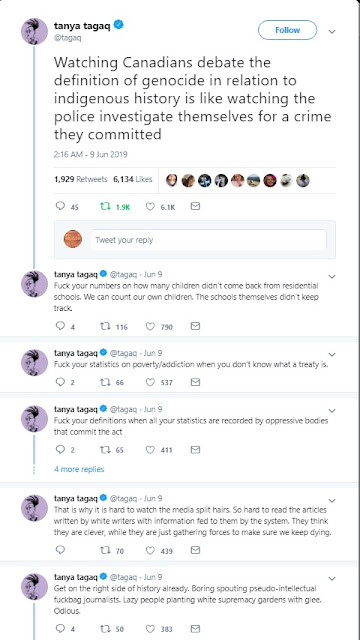 A young mother who was on Manitoba's birth alert system is joining calls from advocates, researchers and the National Inquiry into Missing and Murdered Indigenous Women and Girls demanding that the province stop taking babies from mothers at birth.

35) Andrew Scheer rejects use of ‘genocide’ in reference to Indigenous women, girls

Conservative Leader Andrew Scheer is disputing the use of the word “genocide” in reference to missing and murdered Indigenous women and girls in Canada.

Just days after the National Inquiry into Missing and Murdered Indigenous Women and Girls released its final report, the federal government announced an interim civilian advisory board to oversee the RCMP.

The military regime in Sudan has launched a new wave of arrests and violent intimidation in an effort to undermine opposition plans for a widespread campaign of civil disobedience.

Zeinab Mohammed Salih in Khartoum and Jason Burke, The Guardian

Doctors believe paramilitaries carried out more than 70 rapes during an attack on a protest camp in Khartoum, the capital of Sudan, a week ago.

In the Canadian Arctic, layers of permafrost that scientists expected to remain frozen for at least 70 years have already begun thawing. The once-frozen surface is now sinking and dotted with melt ponds and from above looks a bit like Swiss cheese, satellite images reveal.

Justin Trudeau is in over a barrel. In 2015, he made a deal with Alberta. He would get an oil pipeline built to a coast if the province joined his pan-Canadian climate plan. After his election this past April, Conservative Alberta Premier Jason Kenney ripped up Alberta’s side of the bargain and declared war on Trudeau‘s climate plan.

42) The Uninhabitable Earth: A grim portrait of the future of climate change

Floods in Ontario. Wildfires in Alberta. A mass species die-off. According to scientists, all of these phenomena are caused or exacerbated by our warming climate.

The annual Gulf of Mexico "dead zone" – a region of oxygen-depleted water off the Louisiana and Texas coasts that's harmful to sea life – will be the second-largest on record this summer, scientists announced Monday.

Almost 600 plant species have been lost from the wild in the last 250 years, according to a comprehensive study.

Adding to the mountain of statistical evidence showing the severity of U.S. inequality, an analysis published Friday found that the top one percent of Americans gained $21 trillion in wealth since 1989 while the bottom 50 percent lost $900 billion.