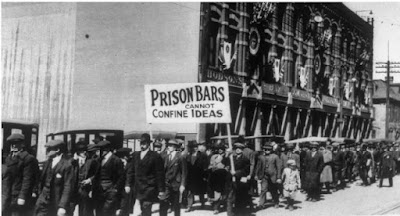 On June 17, 1919 police arrested leaders of the Strike Committee of the Winnipeg General Strike. Among those they apprehended in raids around the city were A. A. Heaps, William Ivens, John Queen, R. B. Russell, R. J. Johns, George Armstrong, R. E. Bray and William Pritchard.

This came as government, media and business leaders attempted to portray the strike as the work of "foreign" radicals who were engaging in a Bolshevik or anarchist conspiracy.

The arrests would ultimately lead to the protests on June 21, Bloody Saturday, where police killed two and wounded at least 30.
Posted by Michael Laxer at 7:52 AM