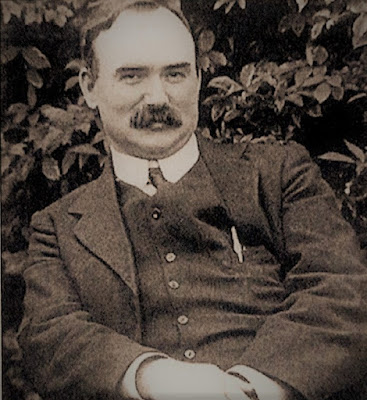 James Connolly, Irish Revolutionary and Socialist
Industrial Workers of the World member and founder of the
Irish Socialist Republican Party
Born 5 June 1868
Connolly would be brutally executed, strapped to a chair and unable to stand from wounds, by the British army after the Easter Rising in May, 1916

- Yes, friends, governments in capitalist society are but committees of the rich to manage the affairs of the capitalist class (From the Irish Worker, 29 August 1914)

- If you strike at, imprison, or kill us, out of our prisons or graves we will still evoke a spirit that will thwart you, and, mayhap, raise a force that will destroy you.

We defy you! Do your worst! (From Courtsmartial and Revolution, 1914)

- Apostles of Freedom are ever idolised when dead, but crucified when living. (From The Men We Honour, 1898)

- ...we repeat, state ownership and control is not necessarily Socialism – if it were, then the Army, the Navy, the Police, the Judges, the Gaolers, the Informers, and the Hangmen, all would all be Socialist functionaries, as they are State officials – but the ownership by the State of all the land and materials for labour, combined with the co-operative control by the workers of such land and materials, would be Socialism.

Schemes of state and municipal ownership, if unaccompanied by this co-operative principle, are but schemes for the perfectioning of the mechanism of capitalist government-schemes to make the capitalist regime respectable and efficient for the purposes of the capitalist; in the second place they represent the class-conscious instinct of the business man who feels that capitalist should not prey upon capitalist, while all may unite to prey upon the workers. The chief immediate sufferers from private ownership of railways, canals, and telephones are the middle class shop-keeping element, and their resentment at the tariffs imposed is but the capitalist political expression of the old adage that “dog should not eat dog.”

It will thus be seen that an immense gulf separates the ‘nationalising’ proposals of the middle class from the ‘socialising’ demands of the revolutionary working class. The first proposes to endow a Class State – repository of the political power of the Capitalist Class – with certain powers and functions to be administered in the common interest of the possessing class; the second proposes to subvert the Class State and replace it with the Socialist State, representing organised society – the Socialist Republic. To the cry of the middle class reformers, “make this or that the property of the government,” we reply, “yes, in proportion as the workers are ready to make the government their property.” (From State Monopoly versus Socialism, 1899)