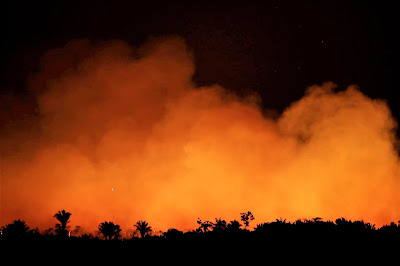 THIS SUMMER, fires are being used to clear wide swaths of the Amazon at an unprecedented rate. One-fifth of the Amazon has already been destroyed in the past 50 years; further industrialization of the rainforest risks destroying another fifth, a loss that would be catastrophic for the global ecosystem. 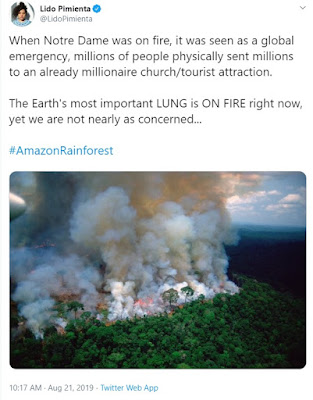 A few hundred fascists once again invaded Portland for a much-anticipated rally Saturday, but this time were mostly deprived of the violent spectacle they crave, as a much larger group of anti-fascists made them know they weren’t welcome in this city.

The Sudanese Revolution has won major victories. But it still needs to wrestle control from the military to popular forces.

Along a big, commercial street in Los Angeles' North Hollywood area, near a row of empty storefronts, about half a dozen motor homes sat parked on a recent morning. Inside one of them, 67-year-old Edith Grays and her husband watched TV with the door open. Grays said they'd been there a few days, despite a two-hour parking limit.

Child-care and health-care advocates are slamming the provincial government's plan to go ahead with some of its controversial municipal funding cuts next year.

He’s a billionaire who wants to be an NFL team owner, and erasing Colin Kaepernick is the price of admission.

“We call on El Salvador to end the shameful and discriminatory practice of criminalising women once and for all by immediately revoking the nation’s draconian anti-abortion laws,”

8) Two Communist Lawmakers Are Suddenly Setting the Agenda in Chile

In a country that’s long stood out as the beacon of free-market principles in Latin America, two young communist women are capturing much of the attention in government circles.

OPPOSITION Socialist Party in Western Province says it is concerned about the hunger situation in the region.

11) Israeli Arms Trade in South Sudan Was Disguised as “Agriculture”

Investigative journalist Sam Mednick revealed that the agricultural company Green Horizon was a front for former Israeli general Israel Ziv's security company CST who were supplying arms to South Sudan, fueling the conflict by selling arms to both sides.

Bolivia’s right-wing opposition faced a new round of internal splits, leaving them weakened ahead of upcoming presidential elections, in which leftist President Evo Morales is well ahead in the polls. Leading opposition candidate Carlos Mesa had a number of key allies resign from his party on Monday, accusing him of racial discrimination, and undemocratic conduct.


No, Epstein was not killed by a cabal of powerful men who wanted to silence him. But his death was part of a larger plot: the US prison system.

15) The SNC-Lavalin Scandal Is a Sideshow Distracting from the Real Issue: Corporate Control

The media fixation on the scandal keeps the election debate within status quo-friendly parameters, which benefits the Canadian elite and their two main parliamentary representatives: the Conservatives and — with important caveats — the Liberals as well.

At least two investigations are underway into the extremist activity of Master Cpl. Patrik Mathews, an active combat engineer in the Canadian Army Reserves in Winnipeg who holds membership in a violent neo-Nazi hate group.

17) 'Hands in the air': RCMP raid home of army reservist accused of ties with neo-Nazi group

The RCMP raided the rural Manitoba house of a military reservist who is suspected of recruiting for a global neo-Nazi terrorist group late Monday night and seized a number of firearms.

18) White Supremacy Is Terrorism, Not a Difference of Opinion

An Indiana city learns that a weak response to white supremacists has predictable consequences.

Sen. Bernie Sanders has released his “workplace democracy plan,” a sweeping set of proposals for strengthening and modernizing U.S. labor laws that would, if enacted, create a major shift in the power balance in American workplaces. Sanders debuted the plan Wednesday as he and other candidates appeared at the Iowa Federation of Labor’s convention.

20) A Killer Cop Gets Fired, and Somehow the Cops Are Angry

Daniel Pantaleo suffered the absolute minimal consequence for killing Eric Garner. The fact that the police union is throwing a tantrum is sick and outrageous.

Two U.S. athletes have been punished for protesting on the medal stand during the Pan American Games in Lima, Peru. According to letters from the U.S. Olympic and Paralympic Committee (USOPC) obtained by The Associated Press, fencer Race Imboden and hammer thrower Gwen Berry were handed a 12-month long probation for their actions.

IN THE FALL of 2017, Yvonne Esparaza gathered all the mental health records she could find in order to plead to a Los Angeles County judge not to send her daughter to jail. She said her daughter, Jasmin, who had a history of mental illness and substance abuse, was facing up to 10 years in prison for grand theft auto. Yvonne was concerned that a cell would make her daughter’s condition worse. The judge said the health records were irrelevant to her prosecution and sent Jasmin to the Century Regional Women’s Detention Facility. Two years later, Yvonne said her daughter’s mental health has worsened, and she fears for Jasmin’s safety.

23) 'I am the Chosen One': with boasts and insults, Trump sets new benchmark for incoherence

President outdoes himself in new press conference as he attacks the Danish prime minister, Jewish Democrats and the press.

“We are heartbroken by today’s Supreme Court decision. It is a tragic conclusion to Mr. Swearingen’s fight to prove his innocence,” said Mr. Benjet. “Our thoughts are with Mr. Swearingen and his family on this unspeakably difficult day.

25) Reviving the anti-subversion law under Duterte

The anti-subversion law was the dictator Ferdinand Marcos' tool of choice in strangling the opposition and crushing legitimate dissent. Groups fear its planned revival under President Rodrigo Duterte will lead to the same – or even worse.

26) Kamikaze UCP candidate went from nearly broke to flush after getting envelopes with $60,000, documents allege

The United Conservative Party leadership contender who ran a "kamikaze" campaign on behalf of Jason Kenney — now Alberta premier — saw his campaign coffers soar from nearly broke to flush after he was handed envelopes stuffed with $60,000, according to documents that detail for the first time an alleged scheme to circumvent Alberta election laws.

James Sears, a former pick-up artist and editor of Your Ward News, was sentenced to a year in prison for promoting hatred against women and Jewish people.

28) ORGANIZING AGAINST PRECARITY: PART ONE IN A SERIES

Economic developments have brought sweeping changes to the character of work. The rapid growth of precarious employment and the rise of the gig economy are among the most challenging factors that affect workers’ ability to organize and struggle collectively. Confronting these challenges has required new approaches by labour movements. In this three-part series, People’s Voice examines how workers and unions are navigating the stormy seas of the new economy.

On August 2, Prime Minister Justin Trudeau made a trip to Iqaluit for a photo-op during which he laid out his government’s alleged commitment to building new housing in Nunavut. The territory is in the midst of a severe and worsening housing crisis with Premier Joe Savikataaq saying in 2018, “We need between 3,000 to 3,330 houses right now. We are not even keeping up with today’s demand and every day that demand is growing.” This crisis is anticipated to be exacerbated in the future by the fact that Nunavut has the country’s fastest growing population.

The postal workers of SUD-Poste 92, in Haut-de-Seine, in the western suburbs of Paris, have won their 14-month strike, marking an end to one of the longest strikes in French history. During these long months the workers faced intense repression by the police, who worked hand in hand with the managers of La Poste, a state-run company.

Immediately following the announcement by the Indian government of Narendra Modi that it would divide the state of Jammu and Kashmir, five of the country’s left parties issued a joint statement condemning the assault on federalism and calling for mass protests. The Communist Party of Pakistan also issued a statement, in which it expressed solidarity with the Indian left parties and warned that Modi’s legislation “has paved the way for India to transform into a fascist despotic state.”

Indian opposition leaders including former Congress president Rahul Gandhi were barred from leaving the airport on Saturday in Kashmir, where local authorities had warned that their visit could stoke heightened tension in the region.

33) Three migrant children die of flu in detention with US authorities refusing to give vaccines, as reports of child molesting emerge

At least three migrant children being held in detention centres have died after suffering from flu, but US Customs and Border Protection (CBP) has said that it does not plan to vaccinate detained immigrant families as winter approaches.

34) Bruce Shillingsworth: 'We are the last generation who can fix climate change'

“I believe the numbers will change the game,” said First Nations activist and artist Uncle Bruce Shillingsworth in an interview with Green Left Weekly about the global climate emergency and the water crisis in the Murray-Darling river system.

A World Wildlife Fund (WWF) Canada study has recently found that cruise ships dumped 1.3 billion liters of wastewater in BC oceans just off coast in 2017.

The billionaire died this week at age 79 of causes yet unknown. While he certainly enjoyed the fruits of his labors to deregulate U.S. industry and reduce taxes on the super-wealthy like himself, he will never have to experience the consequences of his biggest achievement: putting the entire planet on the brink of crisis in the service of enriching himself and a few other fossil fuel billionaires. And we, the people and future generations who are going to live with the fallout, will never see him or the small cadre of wealthy conservatives who funded decades of climate denial face any form of justice.

David Koch was an evil man who dedicated his life to evil. Humanity will be coping with the damage he did for centuries. 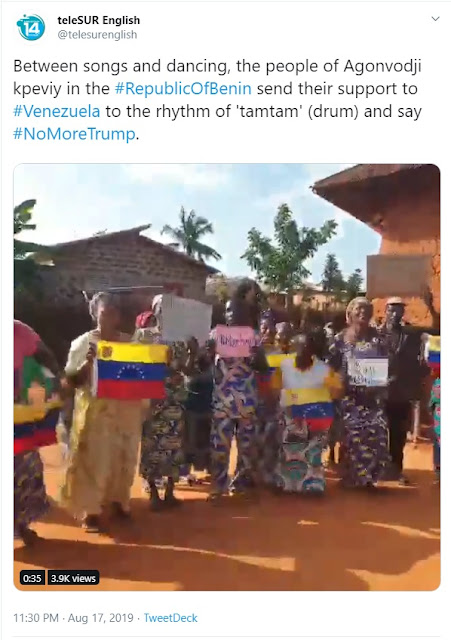