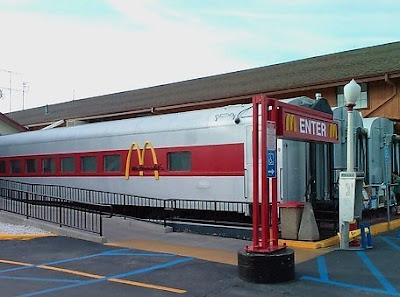 How does Oakville Station Brought to You by Burger King or No Frills Pickering Station sound to you? Or, even worse, how about Filet-O-Fish Station (Exhibition).

It is certainly all of those things but it is also exactly what the geniuses running Ontario are proposing with their idea to sell the naming rights of GO Transit stations. They also are suggesting selling off naming rights for bathrooms and parking lots so one day soon you may be able to do your business in a toilet stall "brought to you by Walmart".

This surreal and disturbing creeping forward of the commercialization of public spaces and life has been going on for a long time now. The most obvious examples are the naming of sports stadiums -- almost all of which are built in part or entirely with public funds as one of the more grotesque forms of corporate welfare. While stadium names used to have historic or national references in many cases, now they are all corporate advertisements devoid of any character or community meaning such as the Rogers Centre or Minute Maid Park.

How would you know Minute Maid Park was in Houston? Well you wouldn't until you were told. The name has zero connection with the city and its history at all.

Names like these are, frankly, soul-deadening. They are a logical goalpost along the neoliberal path to tearing down the very idea of the "public" and replacing it with a world where everything is private and corporate including what once were your communal services or gathering places.

Ontario Transportation Minister Caroline Mulroney sweetens the pot for the companies by offering to  provide those who do "sponsor" stations with ridership data. Allegedly your privacy would be protected, but who can really say for how long. She also makes it clear that her government is thinking of other ways to sellout the system for short-term corporate cash when she says “We are looking to maximize the value of Metrolinx assets, properties, and services to increase non-fare revenue."

Of course, they could increase funding to GO Transit, but that would be too obvious and run counter to their false narrative that the province is in terrible financial shape due to the Liberals.

How about instead of selling naming rights to corporations the government levies a Public Transit Tax on them since all this public infrastructure, among many other things, is necessary to get workers to their jobs and keep the economy moving? Making companies pay for public transit through higher corporate taxes also makes sense given that transit is an essential component of any program to combat the climate emergency that corporations played the central role in creating.

By making the corporate a part of the very names of your local stations it is a strategy -- conscious or intuitive  -- for the government to build a daily, ingrained association between transit and private corporations. Given that the Ford government is quite open in its desire to grant the private sector a much larger role in the provision of public works, having stations with corporate branding is a form of propaganda to breakdown the general, natural resistance to the notion that there is nothing that belongs to us collectively anymore that should not have some shitty logo on it.

Maybe McDonald's could build a giant Golden Arches entryway to Union Station. Why not?

What a terrific tribute to the conquest of the civic by the corporate that would be.

Posted by Michael Laxer at 9:16 AM