We have little more to add on the ugly reality of the NDP's dictatorial streak and drive as well as exposing the travesty regarding Sid Ryan, but it is worth sharing this post by Janet-Lynne Durnford who was trying to run for the NDP nomination in Simcoe North.

What was the transgression to seemingly prevent her from getting approved?

She was unwilling to grant the folks running the centralized party paranoia bureau access to a private Facebook group that consisted of personal communications between her and friends and she belonged to an anti-conspiracy group that the sharp knives at HQ felt was a conspiracy group.

It would be hard to make this up. 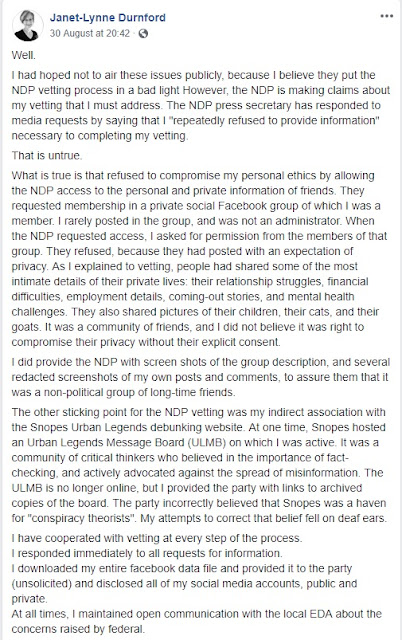 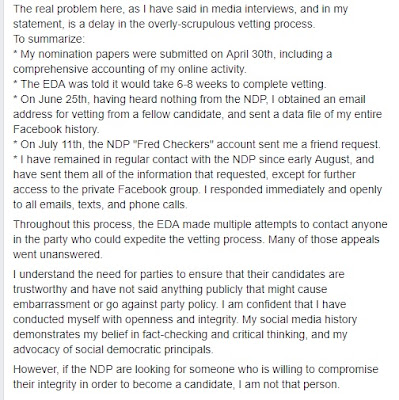 This is all grotesque for very obvious reasons. Also note that the creepy Fred Checkers account is still around to spy on candidates. It is ironic that the NDP would demand that candidates be overt about everything while using a fake Facebook account (in violation of Facebook rules) to spy on them.

But that is the NDP HQ mentality right there.

It is time for left activists and candidates in the party to actually speak up and do something about this or to simply admit that they don't really care and it is all about getting elected and making good money in parliament or as a staffer by being a party parrot.

We all know this is wrong. If you really believe in left movement building take a stand or stop pretending.

Meanwhile, Fred Checkers is watching. Think about how sad a statement that is.