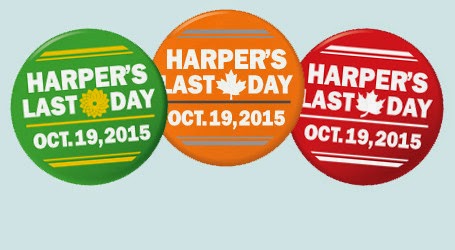 There is a website selling buttons that celebrate, in advance of course, "Harper's Last Day" which they claim will be coming October 19, 2015. The buttons are available in "ironic blue" or in the colours of the three mainstream progressive parties, the Greens, Liberals and the NDP.

While to most on the left they express a no doubt deeply desired outcome, they also embody the contradictions that face Canadian "progressives" in the upcoming election.

This for the simple reason that if you are wearing one of those that are orange, red or green you are espousing two political goals that are not necessarily at all compatible.

While I have written about this before, it is important enough, and persistent enough, that it needs to be returned to. This piece, I should also note, is absolutely not meant as either being an argument for or against the idea of "strategic voting" (though again, I have looked at that idea in the past as well).

Simply put, if your primary goal is to ensure that October 19, 2015 is, in fact, "Harper's Last Day" you cannot achieve this by being a blanket partisan of any of the mainstream parties. By "blanket" I mean a partisan who is calling for a vote for one of these parties in every single riding in the country.

For example, if you are a Liberal or New Democrat living in downtown Toronto's Trinity-Spadina you can wear your red or orange version with no contradiction of any kind. In Elizabeth May's riding you could sport the green one with confidence that it will, indeed, aid in the downfall of Harper.

But in many ridings one, or in some cases two, of these colours will not help in the ending of the Harper regime for the simple reason that one or two of the political parties with which they are associated cannot win in these ridings.

The militants of the parties (especially in the cases of the Liberals and NDP) -- their MPs, candidates, partisans and employees, etc, -- will go to great lengths to either deny this or claim there are other considerations that override it. But it remains a fact.

When they do the latter it is framed as a matter of basic principle. This can be accepted or not. There are those that will assert that their specific brand of progressive is so different from any of the others that it is impossible for them to countenance a strategic vote. The most common of these assertions are when New Democrats claim the Liberals are basically "the same" as Tories or when Liberals portray New Democrats as somehow dangerous radicals.

Both of these narratives are, if taken literally, specious and more facile every year, but they contain elements of truths past and (somewhat less so) present to allow them to continue to resonate in some minds.

However when the party partisans do the former it is purely noxious, bourgeois, petty nonsense. No serious person can claim that if only everyone who was against Harper voted for their specific party then that party could win everywhere.  This is a ludicrous assertion.

Regions, classes, professions and individuals have actual reasons, historic and in the here-and-now, for supporting the parties they do, right or wrong.

While surprising things can happen, as with the Orange Crush in 2011, it is clearly absurd to assert that a party, any party, can be competitive, let alone win, in every riding in Canada. Going into the election we all know there are some ridings that are simply not going to be "winnable" by some parties under virtually any circumstances. With a week or two to go to Election Day, depending on when the electorate's intentions begin to truly solidify, it will be very clear who the races are between in virtually all the ridings in the country.

Claiming that any riding can be won cannot be regarded as a real analysis and is, frankly, intellectually dishonest.

Ultimately, politically aware progressive voters have to make a decision. Is making Election Day 2015 "Harper's Last Day" legitimately what you are seeking or do you have a different set of partisan political goals?

There is no "correct" answer to this, but there is an incorrect one -- you cannot hold both objectives at a national level and in every riding at the same time.

There may be many reasons to oppose strategic voting calls of one type or another -- but ensuring the defeat of Stephen Harper is absolutely not one of them.
Posted by Michael Laxer at 8:25 PM