The winner of the Sudbury NDP debate was the terrible format 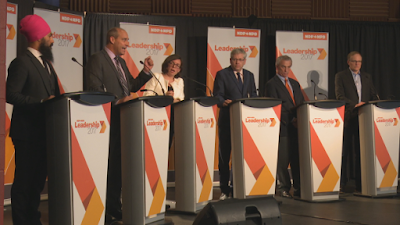 If anyone can be said to have truly won the flat and very boring third NDP leadership debate in Sudbury this past Sunday it must surely be the debate organizers who delivered the dreary and dismally deadening format which produced a contest that would be a sure cure for insomnia.

Many questions were either peripheral or almost certain to lead to what would be more-or-less a consensus with softballs around Liberal ethics and how to handle the Trump administration as opposed to a set focused on the very real fault lines on important issues that exist between the candidates.

Equally awful is the insistence that the audience refrain from applause at any point until the end. This is fundamentally misguided. It kills any sense of excitement or enthusiasm, lessens the impact of a good or emotional line, makes it very hard for a candidate to create momentum in the debate, and also makes it difficult for either them or us to gauge audience reaction. It truly makes no sense at all and is detrimental to the purpose of a debate which is showing that a potential leader can create energy among people.

The whole affair had only a handful of moments or points to it.

One of them would have to be that those thinking that the entry of Jagmeet Singh into the race would bring some pizzazz or "excitement" to the contest must have been left disappointed. Given the high bar of expectations set, Singh clearly failed to deliver in this outing. His opening and closing statements were no more or less compelling than those of the other candidates and he seemed to lack an overarching theme or policy agenda to present other than beating the Liberals, a goal to which I think it likely that all the candidates can be said to aspire.

Even when asked (somewhat indirectly) by Niki Ashton to state where he stood on the Kinder Morgan pipeline he followed by talking about something else. His narrative was driven largely by platitudes.

Ashton's outing was not her best of the three debates though she stuck to her key themes, remained solidly on the left of the field, tried to challenge the other candidates on particulars at times and had a strong opening.

Perhaps in part due to the format the two more technocratic candidates, Guy Caron and Peter Julian, seemed at their strongest to date, though this is more relative than impressive. Julian also stuck to his principled stance against any pipeline expansion while Caron kept much focus on his central basic income plank.

Charlie Angus was very good at points, though his overly folksy pitch continues to grate as trying too hard for authenticity which ironically renders it inauthentic. Still, when he spoke of how the NDP had to make it clear it was not a part of the political establishment and to reach out to and include its base more, saying that people don't trust the party either, he was compelling. He was, as well, articulate and powerful on issues around native rights and his rhetorical focus of having the backs of the people came into its own and registered, perhaps through months of repetition, more forcefully.

Pat Stogran had the best line of the afternoon when he spoke of his mother's advice to“spit in one hand and wish in the other and see which one fills up first", a genuinely funny moment that stood out all the more in contrast to the general tone.

Otherwise, though, Stogran's first debate was something of a train wreck with him flubbing questions or not really answering them, basically admitting at one point that he did not have a solid grasp on social policy, thanking everyone for their patience after saying he had a lot to learn (endearing honesty perhaps, but unwise) and delivering the debate's low moment when claiming that millennials had been closed out of permanent jobs due to the labour movement which is an absurd and anti-union contention.

At any rate, after a second debate that was fairly lively this was a return to the doldrums that will likely leave many hoping that there will be something to wake them up when September comes.

See also: The NDP's leadership debate begins not with a bang but a miserable whimper
Posted by Michael Laxer at 11:34 AM