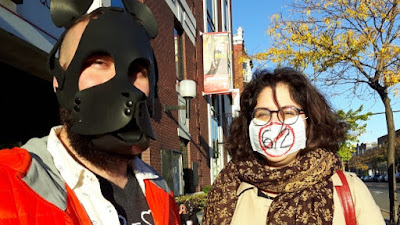 
This list covers the week of  October 15-22. It is generally in order of the date of the article's release.

1) Time to make the link between abuse and film content

Many creative men have come out since the Weinstein allegations, making it clear that they do not agree with sexual abuse. I wasn’t aware there was any doubt that sexual abuse was a bad thing, but it’s good to have it clarified. (Forgive the sarcasm. It’s been a long week.) But so far, very few have been brave enough to start a conversation about the subtler, yet no less urgent, subject of the content of their own work, to examine their own record regarding the treatment and the representation of women. The focus is quite rightly on the horrendous sexual abuse that Weinstein is alleged to have committed. But to focus on that alone is to miss the point that the portrayal of women – of their lives, their feelings, their sexuality and their bodies – is nearly always decided upon and filtered through male eyes. Nearly every actress will tell you about scripts that included scenes of female nudity that seem to have no apparent reason for being there and that are often degrading.

Colin Kaepernick is prepared to fight.


The exiled QB filed a collusion complaint against NFL owners, according to multiple reports. Kaepernick filed the complaint outside of the NFLPA, according to ABC News.

A woman who says Donald Trump groped her is attempting to get all documents from the President’s 2016 campaign that mention sexual assault.

5) It’s not just one monster. ‘Me too’ reveals the ubiquity of sexual assault

Me too may be another hashtag. With good intentions. But this time it is showing the ubiquity of sexual assault. “If all women who have been sexually harassed or assaulted wrote ‘Me too’ as a status, we might give everyone a sense of the magnitude of the problem,” said the actor Alyssa Milano. Well, now it’s there all over social media if you choose to see it. Women saying “me too”, often describing their first sexual assault, some when they were not yet 12.

Kevin Smith recognizes that his career will forever be linked to Harvey Weinstein, the man whose two previous companies — Miramax and The Weinstein Company — have produced the filmmaker’s most notable projects. So, in the wake of the recent sexual misconduct allegations leveled at the disgraced Hollywood mogul, Smith has decided to donate all of his future residuals from Weinstein-connected projects to Women In Film, a non-profit organization advocating for progress and gender parity in the industry.

On June 15, 1841, the newly established Legislative Council of the Province of Canada – a body of twenty-four appointed lawmakers – was gathered in its chamber in Kingston. Its speaker, a businessman and nationalist named Austin Cuvilliers, began the day’s proceedings by reminding his peers of their mandate: “Many subjects of deep importance to the future welfare of the Province demand your early attention,” he said, but the most important of them “is the adoption of measures for developing the resources of the Province. The rapid settlement of the country, the value of every man’s property within it, the advancement of his future fortunes are deeply affected by this question.”


Asked if they wanted to discuss their campaign's fundraising, in light of one candidate's claim that they were raising money at historic levels, neither Steve Fletcher (DFL) or Samantha Pree-Stinson (Green Party) had to ask which of their opponents was pulling in all that money.

10) I Got Shut Down While Trying to Report on the Louis C.K. Rumors

A couple of years ago, I traveled to a comedy festival in the hopes of asking comedians like Dave Chappelle, Kevin Hart, and T.J. Miller what they'd heard about Louis C.K. It did not go well.

Sears Canada will pay a final $2.8 million in retention bonuses to 36 head office staff, even though the retailer's restructuring efforts failed and the company is closing its doors.

Theresa May has confirmed there will be no Government cash to fit sprinklers in tower blocks, triggering accusations she has broken a promise made after the Grenfell Tower tragedy.

13) The Case for Free Public Transit

For liberals across the spectrum, the temptation is real to lionize George W Bush now. Donald Trump is our child-king, slobbering over the country and embarrassing us all. He is parody made real, a lackey for rightwing billionaires everywhere. It’s not hard to find a talking head on the left who will say he is, without question, the worst president America has ever had.

One day after setting up a temporary hotline for complainants of sexual assault and harassment, Montreal police say the calls are pouring in.

Last January, six months after Fox News ousted its chairman amid a sexual harassment scandal, the network’s top-rated host at the time, Bill O’Reilly, struck a $32 million agreement with a longtime network analyst to settle new sexual harassment allegations, according to two people briefed on the matter — an extraordinarily large amount for such cases.

Somewhere in the Quebec government’s legal department, a team of lawyers is bracing to argue in court in what may be the not-too-distant future that the wearing of dark sunglasses puts the safety of the province’s public transit system at risk. Ditto presumably in the case of local libraries and city parks.

18) I Am Disgusted By Trudeau's Response To Quebec's Racist Law

Either you believe people have an inalienable right to peacefully express their deepest religious views, or you don't.

Federal NDP Leader Jagmeet Singh says he's "completely opposed" to Quebec's new and controversial law that would effectively force Muslim women who wear a niqab or burka to uncover their faces to use or provide public services, but he's confident the legislation will be challenged.

Protesters wearing surgical masks and scarves over their faces lined up Friday along a Montreal bus route to rally against a new law that would force anyone using public services, including Muslim women wearing a niqab or burka, to uncover their faces.

What better way to show how ridiculous it is to try to legislate the dress of the tiny fraction of Muslim women who wear the full face veil than to target all face coverings? Outlaw the balaclava and the bandana, put the kibosh on the cagoule and the cache-cou, let Quebecers get frostbite in the name of fairness — and that will teach the xenophobes the pointlessness and offensiveness of trying to regulate what people wear, whatever the reason.

Unfortunately, it is not a bad joke.

Posted by Michael Laxer at 1:07 PM