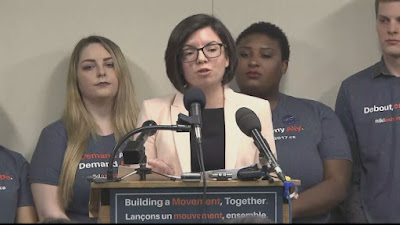 One post that was from over a year ago also took off again and would have been on this list had it been from the period. This was Stop sharing the refugees vs. seniors internet myths!

Without any further ado, here are the top six posts, in terms of hits, from August and September.


No doubt many have seen the inane hatchet job James Di Fiore wrote on the Huffington Post attacking Niki Ashton in deeply sexist, reactionary and over-the-top terms that lead to his absurd assertion from the title on that her "Obsession With Identity Politics Could Destroy The NDP".

There have been so many opinions and arguments rendered on the subject of the federal NDP leadership race that it truly became a conundrum to figure out what angle to take for this column. There was also the fact that I had decided to do something out of character and openly endorse a particular candidate, which presented its own challenges in terms of how to approach writing this.  Finally, I decided to take the slightly unusual path of writing it from a “personal experience” perspective, using the first-person narrative to chronicle how I ultimately now find myself more certain than I have ever been before about the future of the New Democratic Party of Canada. I also decided to answer the one question I get asked most frequently regarding this race, which is: “what made you decide to go for Guy Caron so passionately as your first choice?” So, here goes:

As most New Democrat eyes are fixated on the federal NDP leadership race taking place, Manitoba's provincial NDP is also currently in the process of choosing their next leader.

With the obvious and shameful blacklisting of Colin Kaepernick by the NFL's owners continuing, a protest movement is growing that aims to expose and push back at this.

Especially now in the era of Trump the reality of where anti-Islamic rhetoric and actions can lead has come into clear focus. Islamophobic laws that would accept the violation of fundamental and basic freedoms under the guise of promoting women's rights, secularism or social order are particularly dangerous at this junction in history.

See also: Trudeau and Syria, Toronto 1910, 'Secularism' & more -- April and May on The Left Chapter in review
Posted by Michael Laxer at 11:49 AM