On October 16, 1970 the federal Trudeau government used the pretext of two kidnappings by the extremist Quebec nationalist group the Front de libération du Québec (FLQ) (which supposedly constituted an "apprehended insurrection") to introduce the War Measures Act suspending the habeas corpus rights of Canadians and allowing police wide latitude to arrest people without the laying of charges. This was one of the most grotesque anti-democratic actions in modern Canadian history and was an enormous overreaction to the activities of fringe elements.

As Tommy Douglas said at the time, "The government, I submit, is using a sledgehammer to crack a peanut."

With the War Measures Act in place the Trudeau government rounded up hundreds of entirely innocent nationalist and leftist activists in Quebec, sought to deal a crippling blow to the emergent Parti Québécois and to interfere in the upcoming Montreal municipal elections.

While the introduction of the Act was very popular in the immediate climate of manufactured hysteria, there were a number of courageous Canadians (remembering that the Act allowed the arrest of anyone without the need of even a pretext of having actually committed a criminal act) who stood against it including 16 NDP MPs, many leftist activists across the country and much of the country's labour movement. They have been vindicated by history.

This circular and statement was released and distributed by the Communist Party of Canada in the days just after the War Measures Act was introduced. It outlines the groups resisting the act, the terrible and frightening consequences of it, as well as what the real targets and motives of the act were. 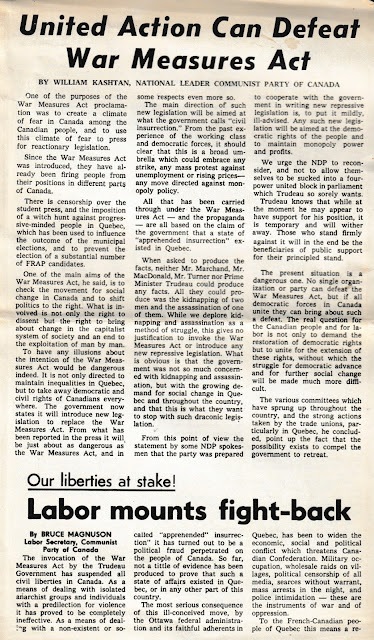 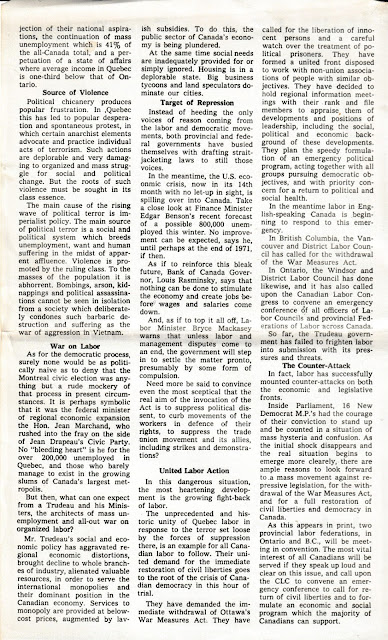 Posted by Michael Laxer at 7:07 AM