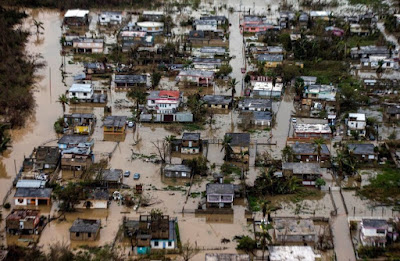 This list covers the week of  September 24 - October 1. It is generally in order of the date of the article's release.

1) Caught on camera: prison guard sexually assaulted by colleague says Corrections Canada 'did not protect me'

Tracy Mercier doesn't want to watch the video of a colleague sexually assaulting her, but is glad the tape exists — recorded by a hallway camera inside Mountain Institution, a medium security federal penitentiary for male offenders in Agassiz, B.C.

Former NHL player Georges Laraque says it is embarrassing that the Pittsburgh Penguins are willing to visit the White House.

3) NBA’s Steve Kerr blasts Trump over anthem tantrum: ‘You know what else is disrespectful to our flag? Racism’

Golden State Warriors coach Steve Kerr blasted Donald Trump in a harsh interview on Saturday after the president rescinded an invitation to the NBA champions to visit the White House.

AS 3.5 MILLION AMERICANS languished without power in Puerto Rico this weekend, President Donald Trump turned his attention instead to NFL players who had decided to take a knee during the national anthem to protest injustice, bigotry, and police brutality in the U.S.

While players in other sports leagues have increased their voices, WNBA players have advocated for social change for at least 15 months.

6) Sidney Crosby Should Have Done Better

The superstar had a chance to speak up for black people who play and love hockey. Instead, he chose to side with Donald Trump.

7) Why do whites oppose the NFL protests?

In a poll, whites were asked whether the NFL players kneeling in protest during the national anthem are helping or hurting the cause of racial justice. No fewer than 85 percent said they are hurting it.

The defeat Sunday of German Social Democrat Martin Schulz at the hands of Chancellor Angela Merkel is his party's worst loss since World War II and another blow for Europe's centre-left.

9) False rape allegations are rare – rape is not. Stop using the case of Jemma Beale to discredit all women

If there were thousands of Jemma Beales out there, there’s little doubt in my mind that we’d know about it. But there aren’t. Right now there’s only one, which is why we know her name. Meanwhile the names of most rapists will be forgotten.

The majority of small business families don’t see the benefit of income sprinkling, according to a new report from the Canadian Centre for Policy Alternatives.

11) Trump's lack of empathy about Puerto Rico is staggering

After spending the weekend feuding with football players and trashing Sen. John McCain, on Monday night President Donald Trump turned his attention to the devastation still faced by several regions in the wake of Hurricanes Harvey, Irma and Maria.

The island has become a target not only for rapacious vulture funds but also for exponents of Katrina-style “disaster capitalism.”

Across Barcelona and the towns and cities of Catalonia, spontaneous demonstrations are breaking out, with people chanting ‘No Pasaran’, ‘We are not afraid’ and singing anti-Francoist resistance hymns. If this feels distinctly like a scene from Spain dark past, that’s because political repression of this scale has probably not been witnessed in Catalonia since Franco.

14) Norwegian Elections: Another Right-Wing Victory, and a Serious Labour Defeat

The centre-left failed in getting rid of the so-called ‘blue-blue’ government at the parliamentary elections in Norway on 11 September. The Labour Party was the main loser, while small parties on the centre-left advanced slightly. However, the parliamentary basis of the right-wing government has started to unravel. A deeper political crisis may be looming in the background, while social contradictions are on the raise. Social Democracy followed the general European downward tendency (except Britain).

15) While all eyes were on Toronto restaurant shooting, another tragedy went unnoticed

They were both men, both shot dead on the same day. Their deaths, however, were played very differently in the media, speaking volumes about how unequally we value the living.

16) In Defence Of Ad Hominem

An open letter to Michael Enright and those who tell us how not to respond to racism.

17) GOOD RIDDANCE TO AN ABUSIVE CREEP

Hugh Hefner was not a good person. From the accounts of its residents, Hefner’s Playboy Mansion functioned a lot like an internment camp. Hefner exercised totalitarian control over his “girlfriends”: they had a 9pm curfew, and if they violated it Hefner would burst into tears and tell them they should move out. He instituted a strict set of bizarre rules, including forcing each girl to wear matching pajamas. (“If you do something wrong, you’ll get an email. There’s a strict code of conduct.”) He “would constantly create drama and infighting among his girlfriends by randomly changing his long-held positions or household policies to favor one over the rest of them.” He would selectively belittle girls (“You look old, hard, and cheap“), talked down to them and “frequently made them cry.” He pushed Quaaludes on the girls, referring to the drugs as “thigh-openers.” According to Holly Madison, who spent years living with Hefner, he was manipulative, cold, and totalitarian. He refused to use condoms or be tested for STDs, and would require depressing group sex at regularly scheduled times. Each week the girls would have a scheduled time to go to Hefner to receive their “allowance,” and he would threaten to withhold their payment if they had dissatisfied him or broken a rule.

Reading all of the glowing tributes to Hugh Hefner, I wonder if some sort of collective amnesia has struck. It is a sad thing when any life comes to an end, particularly for grieving family and friends. And yet so many celebrations of the Playboy founder’s work gloss over the sexism that was the foundation of Hefner’s company. Hugh Hefner profited from misogyny – he built an empire on it. At the time of his death, Hefner’s net worth was estimated to be £37 million – money that was made through the commodification of women’s bodies, through presenting women’s bodies as sexual objects that existed for men’s consumption.

19) When I heard Hugh Hefner had died, I wished I believed in hell

On hearing that the pimp and pornographer Hugh Hefner had died this morning, I wished I believed in hell.

21) What The NHL Is Doing In Calgary Is Pretty Gross


A massive, multinational company is inserting itself into Calgary’s mayoral election, attacking an incumbent whose policies are preventing said company from obtaining hundreds of millions of dollars in taxpayer handouts, and overtly threatening citizens that unless they vote the way the company wants, they’ll leave town.

Jeremy Corbyn will use his flagship conference speech to promise a “new common sense” model for British life that will overturn 30 years of liberal free market economics.

In a signature speech at the Labour Party conference, Jeremy Corbyn laid out an agenda to return power to the people.

According to reports today, a sex doll called “Samantha” – on display at Linz’s Arts Electronica Festival – was so severely "molested" by a group of men, it was sent home in desperate need of repair and "badly soiled". Despite the damage, the owner claimed the robot was designed to take a lot and would "pull through".

25) Yet another major Russia story falls apart. Is skepticism permissible yet?

LAST FRIDAY, most major media outlets touted a major story about Russian attempts to hack into U.S. voting systems, based exclusively on claims made by the Department of Homeland Security. “Russians attempted to hack elections systems in 21 states in the run-up to last year’s presidential election, officials said Friday,” began the USA Today story, similar to how most other outlets presented this extraordinary claim.

Michal Rozworski, Behind the Numbers

Business in skewed economic assessments of Ontario’s move to a $15 per hour minimum wage has been brisk this week.

Let those words sink in.

Three and a half million people are without power, water, fuel, food, and support. This isn’t some uninhabited atoll. This is where I grew up. This is where my family lives. This is my home.

And my home is dying.

29) 'WE ARE DYING': Puerto Rico mayor says the island is 'inching close to a genocide'

Mayor Carmen Cruz of San Juan, Puerto Rico delivered an emotional message on Friday, amid the logistical difficulties and bureaucratic red tape that has slowed down the hurricane-relief effort on the island.

NFL quarterback Colin Kaepernick was clear from the outset. Beginning in the 2016 pre-season he declared that he would not stand during the playing of the national anthem. He would instead “take a knee” and he did so to protest the police killing of over 300 black people every year. In the summer of 2016 Alton Sterling was murdered one day and Philando Castille the next. Both killings took place on camera and Kaepernick began to speak up. He didn’t shrink and didn’t hesitate in denouncing the everyday carnage in this country. “I am not going to stand up to show pride in a flag for a country that oppresses black people and people of color. To me, this is bigger than football and it would be selfish on my part to look the other way. There are bodies in the street and people getting paid leave and getting away with murder.”

31) Tens of thousands march for abortion rights in Ireland

Tens of thousands of people marched in Dublin on Saturday to demand the loosening of some of the strictest abortion laws in the world ahead of a 2018 referendum on the issue.

32) The 3,000 Americans who fought fascism before World War II

In 1936, young Americans began heading over to Spain to confront the rise of fascism in Europe. They became known as the Abraham Lincoln Brigade. In all, an estimated nearly 3,000 Americans fought in the Spanish Civil War. Spain was viewed as an early front line in the battle against fascism in Europe and these young Americans joined volunteers from across the globe who came to Spain to fight against fascist forces led by General Francisco Franco. Franco was a murderous thug and an ally of Mussolini and Hitler. And eventually, he became a great ally of the United States government.