Early this morning (Tuesday, April 30) the American imperialist stooge self-appointed "president" of  Venezuela, Juan Guaido, arrived outside a Caracas airbase with a group of heavily armed paramilitaries to proclaim that a military coup was occurring to oust the legitimate President Nicolas Maduro. Guaido claimed to be in control of the base, which was rather quickly determined to be totally false.

Shortly after Guaido did this "President of the National Constituent Assembly of Venezuela Diosdado Cabello denied the capture of La Carlota Air Base after a small group of soldiers revolted to promote a coup d'état with the far right against the government of Nicolas Maduro.

"No military installation has been violated in the country, they are on the street in the Altamira Distributor and we are directing operations from La Carlota Air Base," he explained."

Guaido and his people later moved on from the airbase which was never in their control.

In fact, it would seem that only "a few thousand civilians and very few soldiers heeded the call" to join in this "uprising".

So far the military appears to be remaining loyal to the legitimate government. 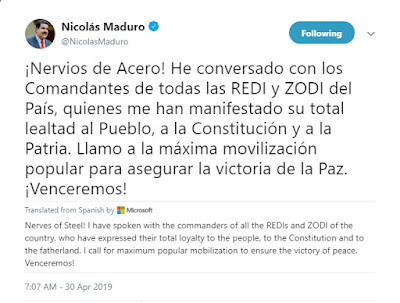 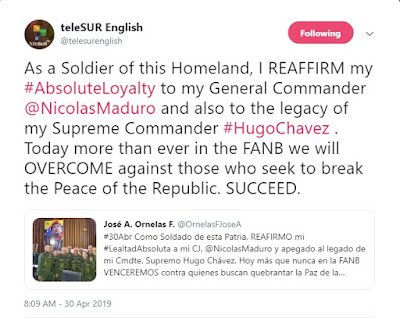 That the ongoing attempt to overthrow the legitimate Venezuelan government of Maduro is a constant series of violent provocations on behalf of American imperialism and the American administration is made clear by the administration itself. 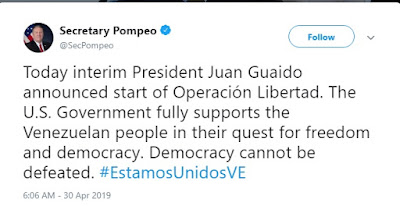 See: US Publicly Admits Support for Coup Attempt in Venezuela

Be under no illusions about the kind of future Trump and crew have planned for Venezuela: Blackwater Founder Lobbying for Mercenaries in Venezuela to Oust Maduro: Report

Meanwhile thousands took "to the streets in Venezuela's capital in opposition to Guaido's coup attempt."

US Green Party leader Jill Stein had some choice words for the administration and its media quislings: 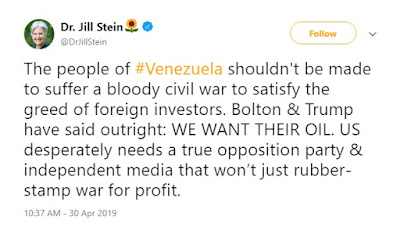 In contrast, Canada's Foreign Minister descended into farce. Only Chrystia Freeland could possibly go on about respecting "peaceful" protests when the day literally started with imperialist stooge Guaido arriving at a military base surrounded by heavily armed men calling for a coup against the country's legitimate government: 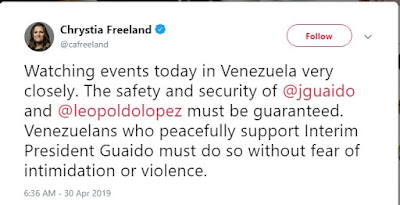 Far-right agitator and provocateur Leopoldo Lopez, who fled house arrest this morning to join with Guaido during the early triumphant claims that Maduro was about to be overthrown appears to have admitted that the coup has failed:

At this point the "Venezuelan Govt Says Guaido Coup Failed".

Predictably, Trump, unable to admit the administration narrative may be failing yet again, became unhinged threatening Cuba while his Secretary of State tried to pretend that Maduro remaining in power was all Russia's fault.

Trump tweeted "“If Cuban Troops and Militia do not immediately CEASE military and other operations for the purpose of causing death and destruction to the Constitution of Venezuela, a full and complete....embargo, together with highest-level sanctions, will be placed on the island of Cuba. Hopefully, all Cuban soldiers will promptly and peacefully return to their island!”"

Cuba has remained a steadfast ally of the Venezuelan people. 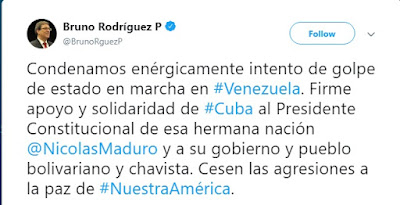 "We strongly condemn the attempted coup d’état under way in Venezuela. Cuba offers firm support and loyalty to Nicolás Maduro, the constitutional president of our sister nation and to his chavista and Bolivarian government. Let there be an end to the assaults on peace in Latin America." - Bruno Rodríguez, Foreign Minister of Cuba