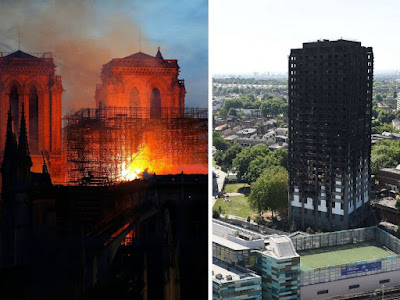 It starts with sections related to the Notre Dame fire and the ongoing austerity attacks of the government in Ontario.

Not least among this litany of ironies is that it takes a Catholic cathedral to remind us that we have barely advanced an inch from the medieval buying of indulgences, when the rich could amass their fortunes in as filthy a fashion as they liked – and then donate to the Church to launder their reputations and ensure their salvation. What was it that old Friar Tetzel used to say? “As soon as gold in the coffer rings, the rescued soul to heaven springs.”

The next time someone tries to pretend like you need to choose between homelessness or immigration, nurses' pay or a tax cut, a children's hospital or a motorway, remember this moment. The money is there at a click of a finger. It just isn't in our hands. 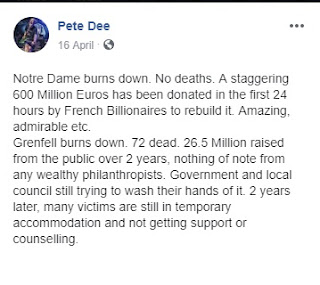 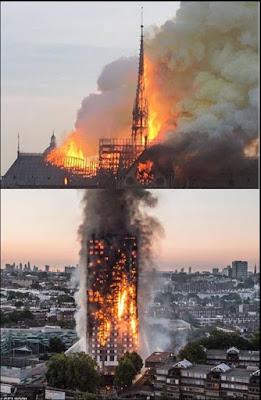 When we triumph, when democracy – true, direct, without a state, leaders or representatives – will be there, when we will self-manage our lives and our places of life, so we will decide what is necessary, vital, and important. So the markets, profits and money will be distant memories.

The inferno that has engulfed the Notre Dame cathedral in Paris has been seized upon by far right provocateurs to spread anti-Muslim hate and conspiracies, even as officials said they have ruled out arson as the cause. 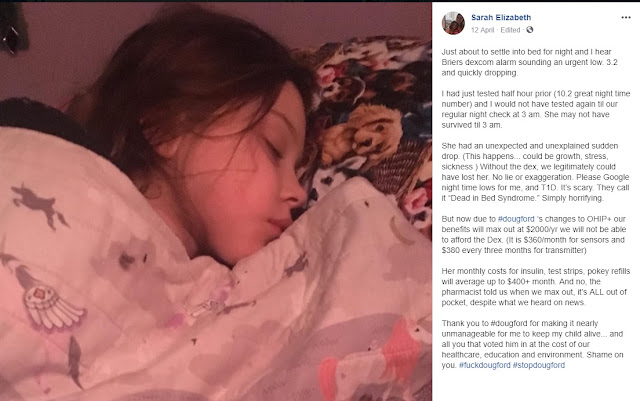 The recent Ontario budget included a 30 per cent cut to legal aid. This will cause hardship for many low-income residents of Ontario, who are disproportionately drawn from racialized communities.

Southern Ontario Library Service says it's facing a 50 per cent budget cut from the province, which would need to be absorbed into the current 2019-20 fiscal year.

Victims of violent crimes will get significantly less compensation after proposed changes in the provincial budget, including capping awards for pain and suffering at $5,000, advocates say. 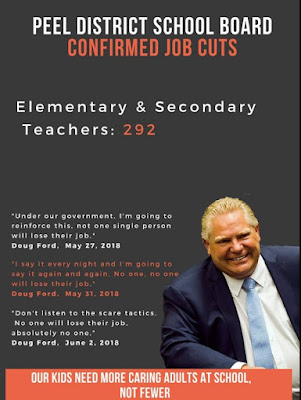 Just one day after hundreds of teachers in Peel Region received word that they would no longer have permanent positions come September, over 150 more in neighbouring Halton Region learned they face a similar fate, the union representing them says.

With the support of Ontario’s right-wing Premier, Doug Ford, a staunchly pro-Israel member of Ontario’s legislature is pushing a private member’s bill designed to silence critics of Israel.

10) Ontario slashes Toronto Public Health funds by $1B over a decade, board chair says

The Ontario government is slashing Toronto Public Health's funding by $1 billion over a decade as part of a plan to consolidate local public health units across the province, says the chair of the city's board of health — a move that's prompting an outcry from city officials.

Ontario's minister responsible for post-secondary education says institutions' future funding will depend on metrics such as graduates' earnings.


The American Civil Liberties Union is warning that armed vigilantes are working directly with the U.S. Border Patrol to unlawfully detain hundreds of migrants at gunpoint along the U.S.-Mexico border. The ACLU cites videos posted on social media showing members of a militia group pursuing migrants in New Mexico’s desert west of El Paso, Texas, and effectively kidnapping them against their will. In one video, vigilantes armed with assault rifles are seen approaching a group of several dozen people seated on the ground, as the video’s narrator, a man named Jim Benvie, films.

The FBI arrested the head of an armed right-wing "patriot" group that had detained hundreds of migrants at the New Mexico border on Saturday for being a felon in possession of a weapon.

An infuriated Houston police chief blew up Friday on Twitter after an 11-year-old girl was ordered to be deported without her family.

15) Defiant Resistance: The Venezuelan Crises and the Possibility of Another World

Bob Dylan once said, “Let us not talk falsely now, the hour is getting late.” February 23rd, 2019, was the day that Juan Guaidó, the self-proclaimed President of Venezuela, had “authorized” “humanitarian aid” to enter Venezuela, an attempt to force the Maduro government, and thus the Venezuelan people, to their knees. There is great urgency as an ever-increasing escalation of violence is being perpetuated by those who would destroy Venezuela, including several attacks on Venezuela’s electrical grid over the last few weeks. But let me be clear: the Venezuelan poor are resilient, and any change will be on their terms. Most importantly, Venezuelan politics is collective, and there is a deep form of solidarity across communities along with an abiding interest in building a different form of politics. In short, if one does not unearth this collective politics, one cannot understand what is happening in Venezuela.

Russian deputy foreign minister said Russia will help Venezuela in investigating the cyber attacks on the country which cause nation-wide blackouts.

A group dedicated to regime change in Venezuela held a secret meeting on overthrowing the country's government last week, according to reporting from The Grayzone Project.

18) US Pushing for War with Venezuela: Moncada

The President of the United States (US), Donald Trump, is secretly preparing for a war against the government of Venezuelan President Nicolás Maduro, Venezuela's Ambassador to the United Nations (UN), Samuel Moncada, said on his Twitter account.

19) With tightening of blockade, U.S. seeks to strangle Cuba…again

“The Trump administration has declared the most severe new sanctions against Cuba since President John F. Kennedy imposed an economic embargo banning all trade with the communist island in 1962.” That was the assessment of William M. LeoGrande, a widely respected Cuba analyst, in reaction to announcements on April 17 by Secretary of State Mike Pompeo and National Security Adviser John Bolton concerning new economic sanctions being imposed on Cuba.

A pilot program that began on March 6 has Cuban officials distributing pre-exposure prophylaxis (PrEP) to those in need.

21) 'Pompeo has Lost His Mind': Chinese Ambassador to Chile

A group of 10 deputies, two senators and three representatives of political and non-government organizations sent a letter to United States President Donald Trump asking to “intercede” in their country’s affairs, resulting in heavy criticism from Bolivian President Evo Morales.

A northern Italian town in the heartland of Italy’s far-right League Party has adopted a new emblem, one that sends a clear message about the country's history: a Christian cross.

Cops in schools is the ultimate bad policing idea:

All contempt charges have been dropped against 14 people who were arrested at a blockade in northern British Columbia in January for barring access to a pipeline company.

26) “Democracy has been hijacked in Guatemala”

Daniel Pascual, coordinator of the Committee for Peasant Unity (CUC), speaks about the struggle for the rights of Indigenous and peasant people and for the defense of territory in Guatemala at a conference in Basque Country.

A man accused of setting fire to three historically black churches in Louisiana was charged with hate crimes Monday. Holden Matthews, the 21-year-old son of a deputy sheriff, was also charged with three counts of arson after being arrested last week. The first blaze occurred at the end of last month, and the two others in early April. All three churches were in St. Landry Parish, about 30 minutes north of Lafayette.

Leaked documents from France's military agency "show that Saudi Arabia and the United Arab Emirates are overwhelmingly dependent on Western-produced weapon systems to wage their devastating war in Yemen," The Intercept reported Monday.

Regulations and renewables are on the outs and battles with environmental groups are in, as Kenney promises to accelerate approvals of energy projects, scrap efficiency measures and fund an ‘energy war room’ to fight anyone who criticizes the province’s energy sector. 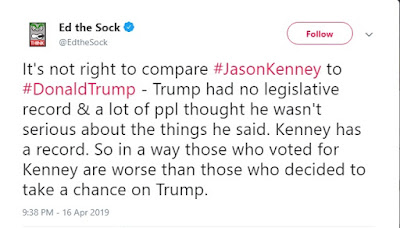 30) Ultranationalism in Ukraine – a photo essay

The growing presence of far-right groups in Ukraine leaves the west in a quandary. The ultranationalists have played a key role in fighting Russia-backed separatist rebels and are now challenging government corruption. But they are pushing for changes that go against democratic ideals.

During the week of February 4-10, Free Transit Ottawa challenged Ottawa’s City Councillors and Mayor to take the Transit Week Challenge. The idea was simple: To get the people who make decisions about public transit to experience the system firsthand. To the surprise of the organizers, the majority of Council chose to participate. Some, such as Shawn Menard, Laura Dudas, and Theresa Kavanagh, enthusiastically took the challenge.

Half of England is owned by less than 1% of its population, according to new data shared with the Guardian that seeks to penetrate the secrecy that has traditionally surrounded land ownership. 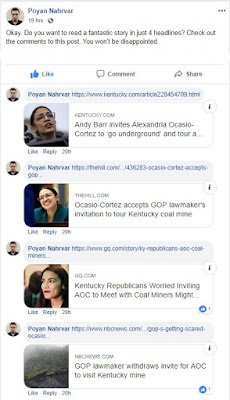 Standing onstage, a man in a video recites a white supremacist slogan in Churchill Square — a place named after a world leader instrumental in defeating the Nazis.

34) Which has failed—capitalism or socialism?

Although nearly every issue of The Wall Street Journal tries to combat growing public support for socialism, this only proves that Marx and Engels got at least one thing right when they wrote in the Communist Manifesto that the specter of communism continually haunts the ruling class. 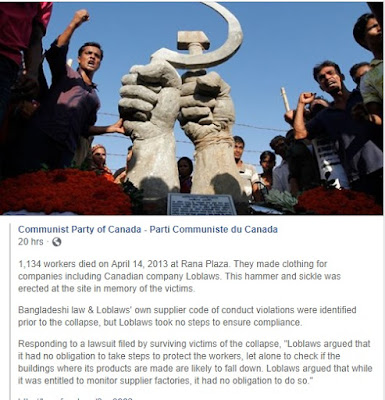 With the support of labor unions, a new bill prohibiting municipalities in the state from enacting “right-to-work laws” was signed into law by Illinois Governor J.B. Pritzker last week.

37) A First Victory for the Sudanese Revolution

Omar al Bashir, the 30-year long dictator of Sudan, the perpetrator of the massacre of hundreds of thousands of civilians in the Darfour and South Sudan wars, the enemy of the working class and the poor of Sudan, the ally of the Muslim Brothers (the Ihwan), the collaborator of Recep Tayyip Erdoğan and the AKP of Turkey, has been ousted. This is a result of the power and resilience displayed by the popular movement, the revolutionary struggle that has lasted for four and a half months. Blessings to the peoples of the Middle East and Africa! We owe a debt of gratitude to the people of Sudan for having demonstrated once again that despots are not stronger than a people in action. Our hearts beat for the success of the Sudanese revolution.

39) Our leaders are ignoring global warming to the point of criminal negligence. It's unforgivable

Humanity survived the cold war because no one pushed the button. On climate change, the button has been pushed again and again.