No matter how many visits Horwath makes to the Canadian Club, business will never support the NDP 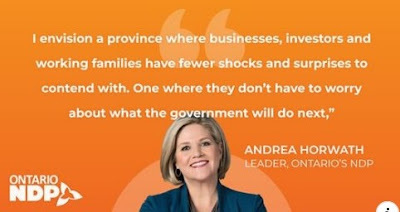 Every once in a while left wingers, socialists and leftists will make the mistake of thinking what passes for social democrat politicians these days somehow share their values in some meaningful sense.

Happily, to avoid undue confusion, the "social democrats" will always make sure, eventually, to clear the air as to what their political function is and what side they are really on.

Take the leader of Ontario's Official Opposition, Andrea Horwath. Horwath, of course, is facing one of the most reactionary governments in recent memory. A government that has made being "open for business" a signature slogan and that places the interests of business first as it did with its cancelling of the minimum wage increase, its attacks on labour laws brought in by the Liberals and its vicious austerity budget attacks on education, healthcare, and pretty much every other area that makes life livable for working people.

There is little doubt that these measures and attacks enjoy the support of Ontario's business "community" and capitalist class, but today's progressives still want to make sure that the enemies of working people know that they are not their enemies.

Hence Horwath's pilgrimage to that noted left institution the Canadian Club on April 17 to let the capitalists know that what is really needed "is guaranteeing stability for businesses" and countering all that Ford has done to put a "chill on investment".

"“Businesses should be able to trust the contracts they sign with the government will be upheld, and investors should see our province as a safe bet,” said Horwath."

Exciting stuff. That will surely get the business community on board with pushing for the steady hand of the social democratic quisling approach.

Of course the history of the last three decades of capitalist retrenchment and reaction, as well as their relentless attempts to get governments to launch attacks on working people and their unions and organizations would indicate otherwise. Amazingly the capitalists prefer an environment of social destabilization and disharmony so long as the victims of it are working people and the state.

This is abundantly clear to anyone who takes a moment to pull their head out the sand and stop pretending the "left" can somehow befriend the enemy with our commitment to capitalist efficiency and order.

The NDP can try and try and try again, but the business community will never be impressed by its lapdog desire to please it.

Canadian capitalists and the Canadian business community are engaged in a class war against Canadian working people that they are, for now, winning. This will not be defeated by courting their support. The socialist left should never be waxing poetic about how to create "stability" for business. Instead we need to, at long last, re-embrace the notion that the only way to create stability and prosperity for workers, the marginalized and people living in poverty is to fight our class enemy in the business world and their ideological minions head on.

And to win doing so.

See also: NDP's Horwath appears at Ontario Chamber of Commerce event mere days after the gutting of rights of workers