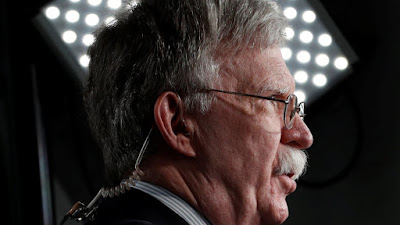 After days of breathless reporting in the US media about public and military support for Venezuelan President Nicolás Maduro collapsing, and about an April 30 coup by presidential poseur Juan Guaidó, we now know the truth:  The whole thing was a fraud, staged at the instigation of Washington in hopes that the Venezuelan people and rank-and-file troops would fall for the trick and think an actual coup was underway.

“Trump’s Venezuela Policy: Slow Suffocation,” an Atlantic report (4/17/19) by Uri Friedman and Kathy Gilsinan, passed up a rich opportunity to expose the humanitarian pretexts for economic intervention, and instead exhibited the worst tendencies of corporate media coverage of US policy in Latin America. 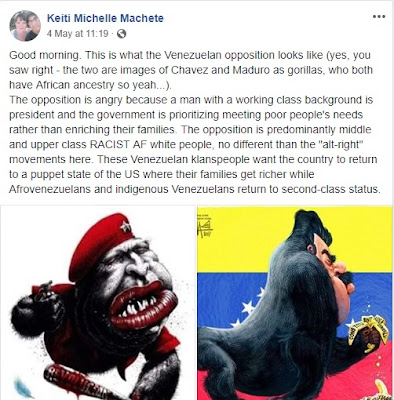 The alleged crimes Zambrano is charged with are: "treason to the homeland, conspiracy, instigating and insurrection" among others.

4) Venezuela Will Defend Itself From Any Foreign Invasion: Arreaza

"The Bolivarian Republic of Venezuela does not represent a threat to the United States, but in the case of a military intervention, the Bolivarian National Armed Forces and the People of Venezuela are prepared to defend its sovereignty."

The self-proclaimed "interim president" of Venezuela admitted to the Washington Post that he expected the legitimate President Nicolás Maduro to step down after he announced his coup on April 30.

7) AOC Lines Up with Pelosi, Bolton and Trump in Support of Coup Attempt in Venezuela

The coup attempt in Venezuela, orchestrated by Trump’s National Security Advisor John Bolton, has been condemned by socialists around the world. “Democratic socialist” congresswoman Alexandria Ocasio-Cortez, however, is siding with Republican and Democratic Parties in support of U.S. imperialism.

The Grayzone has obtained a list of “key outcomes” on Venezuela deleted out of apparent embarrassment by the State Department. It boasts of wrecking the nation’s economy, destabilizing its military, and puppeteering its political opposition.

9) What Is Happening at the Venezuelan Embassy Is an Outrage

Determined to avoid another war, a group of US peace activists sought and received permission from the legitimate Venezuelan government to form an Embassy Protection Collective.

Cubans are truly committed to the principle of sovereignty, we are protective of our independence, and we would never do to others what we would not allow to be done to ourselves.

The effort Justin Trudeau is putting into overthrowing Venezuela’s government is remarkable.

A non-profit agency that helps Ontario patients access health care through videoconferencing has laid off more than 15 per cent of its staff in the wake of a cut to its provincial funding, CBC News has learned.

CTVNews.ca Staff, with a report from CTV Kitchener’s Heather Senoran

The family of a six-year-old girl with cancer says it must pay hundreds of dollars each week for her nutrition supplements following the Ontario government’s cuts to the provincial youth pharmacare program. 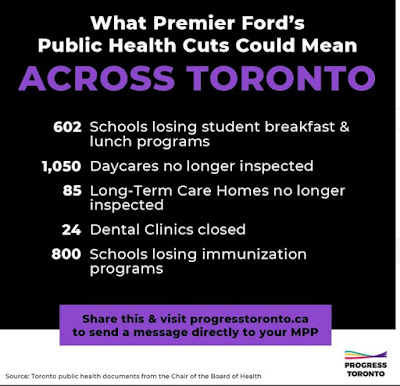 Police were called to MPP Sam Oosterhoff's riding office Tuesday after a group of older adults clutching books showed up to stage a "read in" over provincial library cuts.

A St.Catharines Regional Councillor has gone public about her abortion after Niagara West MPP Sam Oosterhoff declared he wants to make abortion "unthinkable."

16) Should 11-year-old girls have to bear their rapists' babies? Ohio says yes.

An 11-year-old rape victim in northwestern Ohio is pregnant, according to news reports, and a highly restrictive state law on abortion signed last month says a girl in her position must carry and deliver her rapist’s baby. 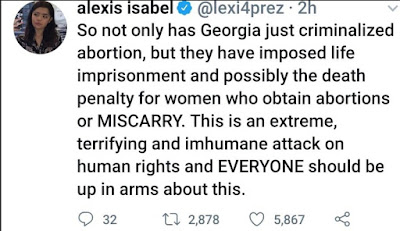 Secretary of State Mike Pompeo has praised the effects of global warming for cutting the time it takes to trade between Asia and the west, during a speech before an international group.


Texas Republican State Senator Bryan Hughes' bill on "election integrity" is a clear attack on voting rights, get out the vote efforts, and preys on the most vulnerable voters. Senate Bill 9 passed the Senate last month, and is a priority for the very powerful Texas Lt. Governor, far right wing ideologue and Trump supporter Dan Patrick, to become law. He claims it "protects our democracy."

Western governments and the xenophobic far right are engaged in a veritable war on Muslims. One way in which this attack unfolds is an ongoing effort to force Muslims to embrace dominant ‘values’ and change their forms of dress or abandon religious observances. Though he was not speaking exclusively about Muslims, the infamous war criminal, Tony Blair, recently sounded off on this very theme of the obligation to ‘integrate’ and was challenged very powerfully by Aditya Chakrabortty in The Guardian.

While there has been some media attention to self-described socialist candidates winning elections in bigger cities, in Northern Wisconsin now, for the first time in its history, a Communist is on the city council in Ashland.  Whitebird defeated incumbent Mettille 52-42.

22) 'Itching for a War,' Bolton Threatens Iran With 'Unrelenting Force' as US Bombers Deployed to Middle East

In a late Sunday statement warning—without any evidence whatsoever—of "troubling and escalatory" actions by the Iranian government, U.S. national security adviser John Bolton used the scheduled deployment of an American aircraft carrier and bomber task force to the Middle East to threaten Iran with military action.

23) Trita Parsi: John Bolton Has Wanted War With Iran for 20 Years. Now Could Be His Best Chance

Iran is accusing the United States of “psychological warfare” after National Security Advisor John Bolton announced the U.S. is deploying a carrier strike group and a bomber task force to the region. In a statement on Sunday night, Bolton said the move was intended to “send a clear and unmistakable message to the Iranian regime that any attacks on United States interests or on those of our allies will be met with unrelenting force.” On Monday acting Defense Secretary Patrick Shanahan said the deployment was made because of a “credible threat by Iranian regime forces” but he offered no details. Axios is reporting the threat is based on information passed on from Israel. The Trump administration has been ratcheting up pressure against Iran following Washington’s withdrawal from the landmark Iran nuclear deal last year. Last month, the U.S. designated Iran’s elite Revolutionary Guard as a terrorist organization. The Trump administration also said it will end a waiver program that allowed some nations to circumvent U.S. sanctions and continue buying Iranian oil without suffering penalties. We speak with Trita Parsi in Washington, D.C., author of “Losing an Enemy: Obama, Iran, and the Triumph of Diplomacy.” He is the founder and former president of the National Iranian American Council, and an adjunct associate professor in the Center for Security Studies at Georgetown University.

24) Chief Poundmaker, wrongly convicted of treason-felony in 1885, to be exonerated by Trudeau

Prime Minister Justin Trudeau will later this month exonerate a First Nations chief who was wrongly convicted of treason-felony after leading his warriors in battle against Canadian forces in 1885.

Britain has gone a week without using coal to generate electricity for the first time since Queen Victoria was on the throne, in a landmark moment in the transition away from the heavily polluting fuel.

Bolivia’s government provided more than 80,000 Bolivians in the department of Cochabamba, with free vaccinations, inoculating against more than 15 diseases.

The Ontario Federation of Labour, which represents 54 unions and one million workers in Ontario has issued an official boycott declaration of Canadian Niagara Hotels Inc. (CNH), effective immediately.

Democratic lawmakers from the United States claimed Wednesday that President Donald Trump holds a “personal vendetta against Puerto Rico” which has left disaster relief for the territory in limbo, as well as for that of Florida after being struck by Hurricane Michael last October.

Chair Raúl M. Grijalva (D-Ariz.) said today that he will pursue other means of passing a pair of bills to help Indian Country after they were pulled from consideration by the House of Representatives in the wake of President Trump’s racist tweet and subsequent Republican opposition to the measures. The House was scheduled to vote on Rep. Bill Keating’s (D-Mass.) H.R. 312, the Mashpee Wampanoag Tribe Reservation Reaffirmation Act, and Rep. Tom Cole’s (R-Okla.) H.R. 375, which updates the Indian Reorganization Act of 1934 to affirm that the federal government can take land into trust for the benefit of tribes that received federal recognition after June 18, 1934.

Lynn Beyak has been suspended from the Senate for the remainder of this parliamentary session after declining to remove letters from her website that have been widely condemned as racist, and for refusing to apologize for posting them.

Faith Goldy complains her failed campaign to become the Mayor of Toronto was sabotaged by “establishment elites,” but in fact her campaign was bankrolled by donors living in some of Toronto’s wealthiest neighbourhoods.

Green candidate Paul Manly has won the federal byelection in Nanaimo-Ladysmith on Vancouver Island, a seat formerly held by the NDP's Sheila Malcolmson. Commentators are saying the result is a wake-up call for all of Canada's political class. It means Canadians might be much more serious about climate change than most politicians seem to think, they say.

More than 20,000 Oregon public school teachers statewide — at least two-thirds of all teachers in the state — walked out of classes on May 8 to demand more state funds to fix crumbling schools and provide up-to-date textbooks.

For the first time in their history, the nine largest French workers unions -including the General Confederation of Labour (CGT), the French Democratic Confederation of Labour (CFDT) and the Workers' Force (FO)- summoned millions of citizens on Thursday to protest against President Emmanuel Macron’s reforms which seek to change contracting modalities, reduce the right to organize and eliminate about 120,000 jobs.

The Organization of American States (OAS) have announced they will be visiting Bolivia to learn about the country’s anti-drug strategy. This follows the country’s rejection of the US ‘War On Drugs’.

36) Iranian communists demand release of activists arrested on May Day

IRANIAN communists are demanding “the immediate and unconditional release” of May Day demonstrators they say were rounded up by police as they tried to mark International Workers’ Day.

Eurovision has always been an exercise in bad taste, but this year’s event takes things to an extreme. If you want to enjoy the kitschy song contest, which will take place from 14 to 18 May in Tel Aviv, Israel, then you have got to ignore the bloody political context that surrounds it. Indeed, Israel is so intent on keeping Eurovision politics-free that anyone it says might disrupt the event will be blocked from entering the country.

Mike Blanchfield, The Globe and Mail

Human rights advocates and progressives in Congress on Monday slammed the corporate media for perpetuating anti-Palestinian sentiments in their reporting on the violence in Gaza and Israel over the weekend.

Posted by Michael Laxer at 9:44 AM