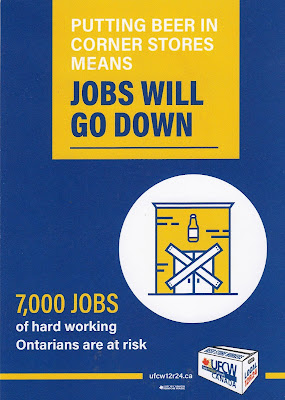 After the total fiasco of Doug Ford's "buck-a-beer" distraction attempt his austerity government is now looking to turn attention from their vicious, petty cuts by putting beer and wine in Ontario's corner stores.

While many find this attractive as it could presumably mean greater short-term consumer convenience, the United Food and Commercial Workers (UFCW) are pointing out that it would have a serious impact on jobs, prices and the environment.

The UFCW, in a post entitled Support good union jobs at The Beer Store, notes that:

The evidence is clear: expanding beer sales to convenience, big box, and other retail outlets would result in major job losses, higher beer prices for consumers, the end to a vital recycling system, and massive costs to Ontario taxpayers. It’s time to say “NO!” to Doug Ford’s irresponsible, job-killing plan for beer sales.

The union is distributing flyers (pictured here) at The Beer Store and is calling on people to sign an online petition in opposition to the government's plans. 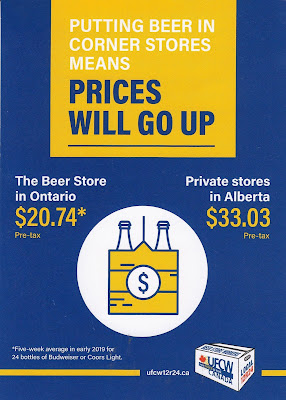 See also: Ford and all his MPPs took away your rights at work. Tell them how you feel about it!

Posted by Michael Laxer at 6:55 AM