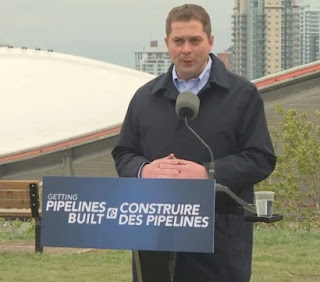 While Liberal and "social democratic" politicians have engaged in a profoundly hypocritical and dangerous game of paying lip service to the facts of the climate emergency the world faces while in practice doing little about it, today Conservative leader Andrew Scheer released an energy plan that is a demented denial of the situation we are in.

Standing behind a placard reading "Getting Pipelines Built" that could easily have said "Burn Planet Burn", Scheer proposed a cross-Canada energy corridor, pipelines to everywhere, allowing tanker traffic in northern B.C., banning "foreign-funded" environmentalists from critiquing projects that massive multinational energy corporations are advocating for to profit from, scrapping the carbon tax, and a variety of other measures.

That a number of these proposals are likely unconstitutional and that no attention was paid at all to the land rights of Indigenous peoples or the impact that these proposals would have on the environment says all we need to know. 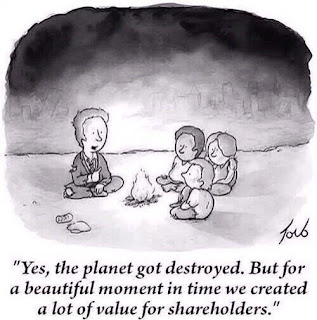 Scheer and the Conservatives simply do not care what scorched earth reality comes out at the end of this as long as they can fool and trick voters who desperately want to see the kind of good paying jobs that projects like these allegedly create and as long the powerful and wealthy business interests who stand to profit massively from this are pandered to.

We could note here the devastating wildfires that the ongoing climate crisis is unleashing (Fort McMurray, anyone?), the floods, the loss of countless species and ecosystems, the fact that millions of workers are having their jobs and lives destroyed by the climate emergency, the fact that there is lots of evidence that the glory days of Canada's energy sector are gone forever, and on and on and on.

But their ideas are clearly not evidence based.

The depth and threat posed to our civilization and to humanity by climate change is only in doubt to the willfully blind. Yet politicians of all stripes continue to peddle one version of denialism or another with Scheer's being the most direct path to aiding in human extinction.

It is amazing that these political windbags will all wax poetic about "families" and building a "future" for our children while doing everything they can to ensure that there is no future for them of any kind. Or, at least, not one worth living in.

This insanity where as a society we insist on blindly advancing down a road to our own self-immolation could not find any better poster boy than Andrew Scheer and his ilk. Given the lack of a legitimate media response and the lack of action by "progressive" politicians, unless collective mass resistance is built to stop these suicidal proposals both in Canada and internationally, they may yet succeed in killing us all.

See also: Blind partisan hypocrisy is not what we need to confront the climate crisis

Posted by Michael Laxer at 3:19 PM