On May 1, International Workers' Day, a few hundred people braved the terrible weather to protest the vicious austerity cuts of the Doug Ford government on the grounds of Queen's Park in Toronto.

As is always the case at such events there were lots of colourful and somewhat "off-colour" signs and placards like "Stop the Cuts", "Cuts Hurt Kids" and "Fuck Ford". There was also a group that brought a mock guillotine that said along the side "Cuts Are Political Violence".

The guillotine has led to considerable faux outrage on the part of the mainstream media and various hand-wringing bourgeois politicians.

The Sun went all in on its front page: 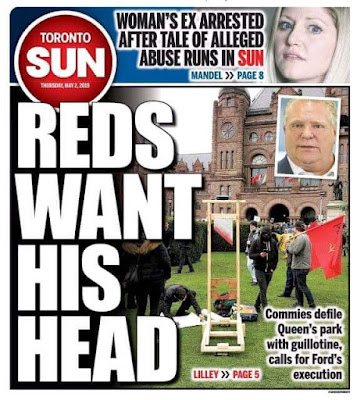 NDP MP Charlie Angus seemed to feel it was an attack on the very basis of our precious liberal democracy. 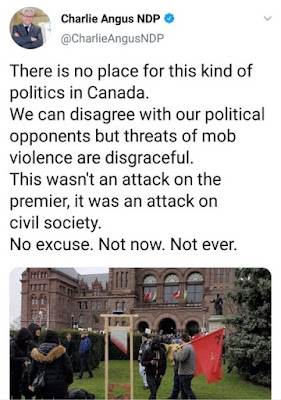 Charlie needs to get a grip.

Ford and his crew even called on the OPP to investigate the mock guillotine. This brought a bemused reaction from former Ontario Premier Bob Rae: 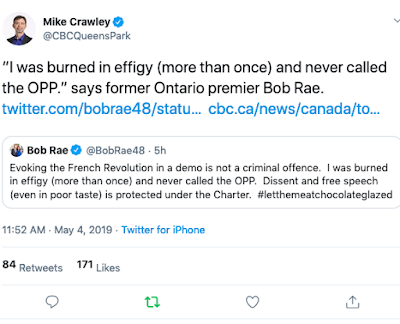 It is a bit sad that Rae's reaction was significantly better than Angus'.

Of course, the protesters are right. The Ford cuts ARE political violence. Unlike a mock guillotine, cutbacks to essential services like Toronto Public Health programs will, in fact, lead to people's deaths. Austerity does kill. It has killed from Greece to the United Kingdom and did right here during the Mike Harris era.

It also sows despair, destroying lives and futures from the education cuts, to the stopping of the minimum wage increase and changes to labour laws, to the gutting of environmental initiatives, to the cruel ending of the basic income pilot project and on and on and on.

These are actions that are actually violent, actually cruel and that will actually kill people.

So save your outrage for silver spoon Ford and his crew of flunkies. It is their attack on civil society that deserves it.

Posted by Michael Laxer at 3:51 PM