Gravel reaches 65,000 donors but will be excluded from the Democratic debates anyway 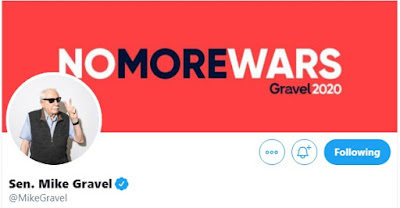 In a classic Democrat backroom technocratic move the party appears to be excluding former Alaskan senator Mike Gravel from the upcoming nomination debates even though he managed to meet the very high threshold of having 65,000 unique donors. 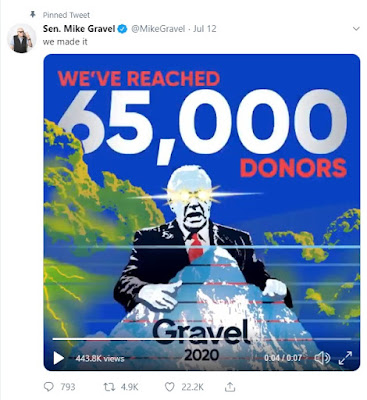 As we reported on before, Gravel has some convoluted ideological ideas, but no one running for the nomination has such clearly anti-imperialist, anti-war foreign policy proposals. His website is subtitled "End the American Empire" and Gravel had promised to directly take on Joe Biden and others at the debates for their militarist records and views.

Despite having qualified it appears he won't be allowed in.

This is because the Democratic Party has capped the number of participants at 20 and in the event that more than that qualify the tiebreaker goes to campaigns that supposedly got a 1% or higher result in three "reputable" polls over having achieved a grassroots coup as Gravel has. Given that many mainstream polls left Gravel out while including a whole bunch of other marginal campaigns that were not able to get 65,000 donors, this is obviously unfair though predictable.

Had Gravel ended up in the debate with Biden he might have made Uncle Joe and others very uncomfortable.

Gravel has not given up yet, but for now it looks like the major focus of his campaign -- to bring an explicitly anti-militarist, anti-imperialist voice to a national televised stage -- won't be happening, which is a real shame.

Posted by Michael Laxer at 3:16 PM