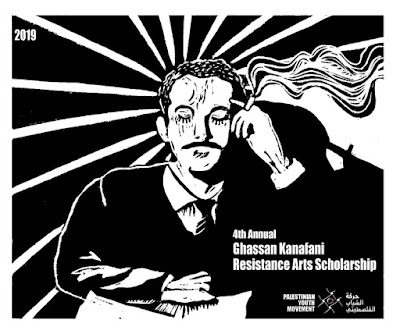 Statement of the Palestinian Youth Movement

The Palestinian Youth Movement was dismayed to receive word that Trinity St.-Paul’s United Church in Toronto caved to a smear and harassment campaign initiated by a Zionist organization and opted to cancel the upcoming celebration of the PYM’s annual Ghassan Kanafani Resistance Arts Scholarship on July 13th, 2019. The purpose of the scholarship is twofold: on the one hand, we seek to provide a much-needed space for our youth to receive support for their creative artistry affirming, through various means, the collective power and resilience of the Palestinian people. We also aim to uphold the legacy of Ghassan Kanafani, one of Palestine’s greatest writers who tirelessly demonstrated how the power of the written word can be the most potent weapon of all in securing the liberation of a colonized people.

Perhaps the desperation that leads Zionist organizations and individuals to continuously challenge even the most modest attempts to promote the struggle and stories of the Palestinian people should be taken as a sign of just how powerful our words and stories really are. For pro-apartheid and pro-colonial institutions and individuals, the unrestrained expression of the Palestinian voice is the greatest scandal of all, because it represents the symbolic rejection of the physical borders and technologies of oppression, occupation and dispossession meant to crush the Palestinian spirit. For this reason, moral panics and outrages need to be manufactured in order to make what is at heart an authoritarian imperative--the direct attempt to silence an expression of humanity and cultural uplift--seem prudent, even necessary.

Kanafani, alongside Mahmoud Darwish and Edward Said, showed the world how even the most brutal oppressions cannot constrain the power of the written word. It was Mahmoud Darwish who proudly declared, “Record--I am an Arab!” and Edward Said who wrote that Palestinians were denied “permission to narrate.” Despite this cancellation, we have fortunately found a new venue to celebrate the creative abilities of our youth. But most important of all, in observance of the recent anniversary of Kanafani’s assassination, we remember how it is through our creation that we reaffirm a collective refusal to be subordinated, to be silenced. Our written words and our images are charged with a collective “No:” we will not be erased, consigned to the dust-bin of history by colonial powers and their eager helpers.

Palestinians will endure, and we will be free.

To let Trinity-St. Paul’s know that you support the church giving a platform for Palestinian groups and events like the Palestinian Youth Movement’s event please email: tsp@trinitystpauls.ca. You can also email to nsanders@united-church.ca and moderator@united-church.ca.

This statement was originally published at: Palestine in America

Send them to The Left Chapter via theleftchapter@outlook.com!
Posted by Michael Laxer at 2:38 PM