Gone. A very short reflection on death and realism 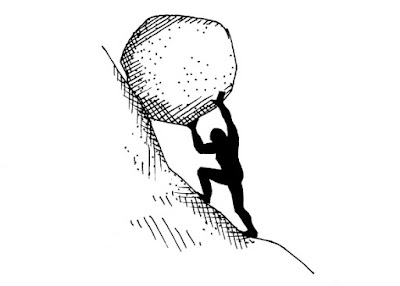 My father hated the idea of death and he would have hated dying. Sadly we are seldom consulted on such matters anymore than we are in the time, situation and place of our birth.

His sudden passing ended a remarkable mind far before it should have gone in so far as anything should ever go.

He was quite well known within an era and a segment of the Canadian left. His thinking remains influential with some and had an impact on the broader political discourse of a nation. Very few people can legitimately say that. But what the French singer Renaud called the assassin of time erases not just people but ultimately memory.

As time passes the presence of lost people and ideas fade and new people rise to take their place with fresh ideas which is ultimately not just how it should be it is how it must be. Like the hit men in Looper who guide it, time, and death, act as a force for erasure and thus renewal however a painful force it may be.

The great French philosopher Albert Camus -- in what is likely one of the more misunderstood tenants in philosophical history -- stated that the only true question of any importance is whether to live or to commit suicide. But by suicide he did not necessarily mean literal death and by living he did not mean the day to day drudgery of what capitalism and industrialism have made out of "life".

For Camus, as he relates with Sisyphus, the point is often to decide whether to die in advance by accepting one's lot or whether to live by struggling against it however futile that struggle may be. This is why to Camus Sisyphus must be seen to be happy despite the fact that he can never win. His act of revolt is a victory.

The Spanish Communist leader Dolores Ibárruri framed the same thinking in a slightly different way when she said that "it is better to die on your feet than to live on your knees".  It is the abandonment of struggle and of purpose that is really death. A soulless servile life is no life at all. Even the "defeat" of death is better than that.

In the end I think this is where people often falter. Caught up in the day-to-day or the mechanisms of whatever limited parties or political visions that seem to be one tiny little electoral cycle away even when these have always proven elusive or false.

Death is a reminder that the futility of existence is its call to action. The inevitability of this final individual "defeat" and the meaninglessness of the universe that it implies is what liberates you to create meaning.

Given that you cannot possibly have more than a few decades left on a planet that will exist for at least a billion years after you die, why not swing for the fences?

We will not be remembered anymore than we remember the average Roman senator, citizen or slave...so fight the system. You cannot take the transience of social prestige or wealth with you.

"Reality" is for losers. Those that have embraced it have already died a kind of death worse than the physical one.

While it may be true that in 2,000 or 10,000 years no one will recall any of even the most famous or powerful of us -- assuming the human race still exists at all -- what that means is that now is the time to act.

Tomorrow is too late. Always too late. Even in the face of defeat the arc of human progress is very long. And it does, as Martin Luther King Jr. said, for some reason bend towards justice.

We can win. We must win. We will win.

If that is your starting point you will at least go into the dark night knowing that you decided to fight on your feet rather than to live on your knees.

When it comes to human oppression, "realism" or "freedom" are just the lies that are waypoints to the continuation of exploitation. The justifications of the status quo and of how things have always been.

We liberate ourselves from this by refusing to accept "reality". The misogynist, classist, racist, homophobic "reality" of one type or another inflicted on us all by the rich and powerful and by their quislings who cannot see a world beyond that of our horrible now with its poverty, viciousness and violence.

I see that new world. Dimly and far off. But I know it is there.

And I truly believe that among the first, tiny, baby steps in creating it is simply refusing to accept what the media, politicians and society tells you is "realistic" anymore.
Posted by Michael Laxer at 8:20 PM