Janice MacKinnon's new role in Alberta says a lot about the NDP's legacy of "fiscal responsibility". None of it good. 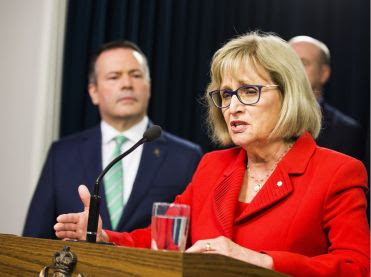 Janice MacKinnon is back. MacKinnon, who was the NDP's Finance Minister in Saskatchewan in the early 1990s, is now heading up a panel for the hard right government of Jason Kenney in Alberta that will provide him with advice on how to get the province out of its supposed “critical fiscal situation”.

This should cause great alarm in Alberta to anyone concerned about what is likely to be severe austerity budgets in the coming years.

MacKinnon, after all, presided over vicious and extreme cutbacks in 1993 in her home province. The Saskatchewan NDP government of Roy Romanow passed a budget that "closed 52 rural hospitals, ended the children’s dental plan and universal prescription drug program, and slashed funding to schools, hospitals, universities and local governments by anywhere from five to 13 per cent." Meanwhile "some business sectors like manufacturing and processing received tax reductions".

This budget was a dream for corporate interests. It emboldened right-wing narratives both in the province and across the country. After all conservatives and liberals could say that even the NDP had accepted that spending was "out of control" and that there was nothing to do but launch attacks on programs and people.

Now Kenney is using MacKinnon's history as a New Democrat to provide him some ideological cover and to allow him to claim that any advice for nasty cutbacks that the panel provides will somehow be "non-partisan".

Of course, as we have looked at before, the Notley Alberta NDP government did itself no favours in buying into neo-liberal narratives around "fiscal responsibility" and its total capitulation to the oil industry and sector and its demands.

But MacKinnon -- who has worked on gigs like this previously for Stephen Harper and the reactionary Pallister government in Manitoba -- takes this to a whole different NDP level.

So the next time that NDP apologists and and partisans point with pride to how the NDP is allegedly the most "fiscally responsible" party when in power -- falsely claiming this is a legacy that flows from Tommy Douglas -- you might want to remind them that it is a legacy that is actually much closer in time to MacKinnon and extreme austerity.

And that is nothing to be proud of.