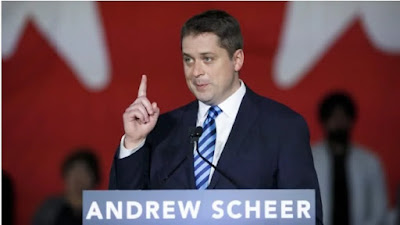 This is the fourth of our weekly Friday election round-ups of developments -- as well as the inane, bizarre, humorous and unusually facile -- in the great show that is mainstream bourgeois politics during the election of 2019.

Andrew Scheer spent the last week doing his best to make sure that any residual fallout from the Trudeau brownface scandal would fade away with one self-inflicted wound after another.

First there is the bizarre and somewhat humorous revelation that he trumped up his credentials as an insurance broker. Of all the many things one could fudge about on a "resume" for public office this has to be one of the most flatline and boring bourgeois options to pick.

Then came the French language TV debate where it was hard to pick a winner amidst the deadening boredom, but very easy to pick a loser that being Scheer. He performed poorly and was unusually wooden even by his standards and seemed terribly evasive on the issue of abortion rights. While during the debate itself he refused to state his personal views on abortion -- even though they are widely known -- he did tell everyone what they already know the next day. Really makes his "personally pro-life but will not reopen the debate if elected PM" line sound even less trustworthy.

This was only compounded by his apparent inability to name for a reporter "a single policy in your platform that you believe shows that you do support women’s rights?”.

Finally comes the revelation that Scheer holds American citizenship. This in-and-of-itself would really be no big deal -- not sure why anyone would have a problem with someone having dual citizenship -- were it not for the fact that he appeared to take issue with the former Governor General  Michaelle Jean holding it in 2005.

Meanwhile Scheer tried to guard his right flank against the People's Party of Canada (PPC) with an appallingly reactionary pledge to cut foreign aid spending by 25 per cent.

For a laugh also see: The Conservatives Say Scheer Won The French Debate & Quebecers Are Ripping Apart The Post.

PPC on an ignorant roll

Last week we saw a number of examples of PPC bigotry and racism at work. Apparently the good folks in the party felt they did not want to let this momentum slip away!

Thus we learned that two PPC candidates tweeted a far right cartoon "of Jagmeet Singh wearing [a] turban with [a] bomb on it". Despite this being clearly racist -- and despite Singh having been the target of racism on a public street related to his turban in Montreal this week -- neither one has been dropped by Bernier.

Just to make sure everyone knows which side he is on, Bernier also retweeted this fake poster approvingly: 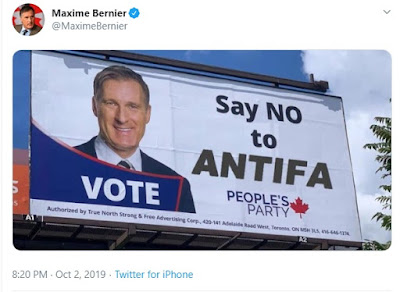 Thanks Max. There might have been a few folks left who were under the illusion you were against fascism.

Not to be outdone...

Of course, the BQ would not want the PPC to hog the nativist spotlight in Quebec now would they? 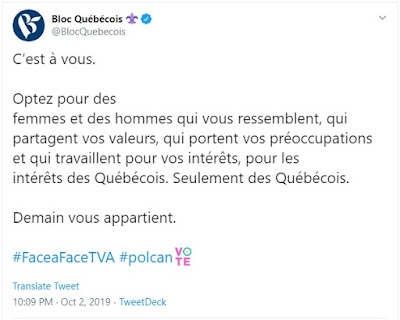 Yes, the tweet actually calls for people to choose women and men who "are like them" and then ends by saying "Tomorrow belongs to you"!!!

Now, presumably they were hearkening back to the old PQ slogan of "Demain nous appartient", but given the rest of the statement it reminded a lot of people more of this:

When a party says it is not on the left...I take them at their word: 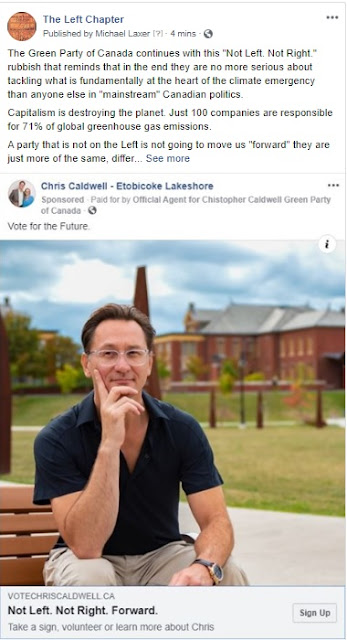 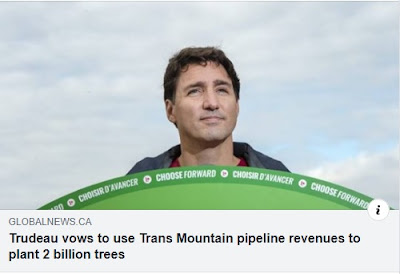 One headline captures why when it comes to climate change, despite all the progressive rhetoric, the Liberals are a joke.

LOL!: He thought he was a candidate for the Marijuana Party. He was wrong

Communist candidate on the ballot in Nanaimo-Ladysmith

We Asked Candidates in Climate-Exposed Ridings for Their Emergency Plans