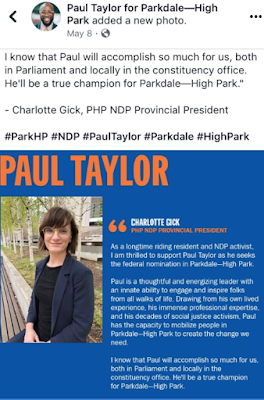 Arif Virani, Liberal MP, was re-elected last night by a great margin as part of the wave that gave the Liberal Party a minority government on the federal level. In the Parkdale-High Park riding, NGO head Paul Taylor was the NDP nominee. His nomination was tainted by a nomination meeting where many working class New Canadian immigrants were turned away at the polls. While there was upset and outrage over this from various NDP members across Canada, long-time Toronto members did and still remain indifferent to this.

Voters gave Virani the win because Taylor never set himself apart from the Liberals. A campaign of early big-named endorsements and slick photo-ops was all the fuel that Taylor had in his engine. Taylor continued to avoid most substance by ducking candidate debates in the nomination run. The Parkdale-High Park executive committee even shut down one proposed primary debate by an independent community activist by way of PHP executive bureaucrat, Charlotte Gick; Gick endorsed Taylor on May 8, over a month before the June 23 nomination meeting. The brass proactively worked to keep Taylor from being substantive on the campaign trail. This hurt him.

If Taylor would have been brave and shifted left and stolen a lot of Saron Gebresellassi’s talking points, the voters would have had reason to break from the Liberals. Taylor could have also done what Saron did and engage New Canadians in the process instead of just relying on Liberal voters to switch to him. The fear of the Conservatives is a very real thing in this age of Doug Ford, who is tear-assing through Ontario and privatizing everything that is not nailed down as well as defunding any program that he can find that benefits the most vulnerable people in the province. Taylor gave no reason for the PHP electorate to break from Virani because he was not really different from him. A Liberal and an orange Liberal? They weren’t going to go with an empty orange candidate and risk giving the riding to the Conservatives.

The PHP race as well as the riding’s nomination debacle is a microcosm of what is wrong with the NDP nationally. Both in the riding and nationally, the NDP wanted a Bernie Sanders or Jeremy Corbin surge without having to embrace the left-wing politics that make such success possible. There is no future in the anti-leftism of the Lewises, the PHP executive, Melissa Bruno, Jagmeet Singh, or any of the party brass that do not believe in anything except their own advancement and status. And Sid Ryan and others who present themselves as dissidents in reality have their hands on the deck of a rotting ship that is hemorrhaging members and voters. Canada needs a viable nationwide party for the working class, which in the 21st Century is majority female and non-white. They need common sense politics condemning capitalism and leading the country to a new and just way. Let go of post-modernism and slick, empty no substance campaigns that just further distance themselves from people who are trying to survive. We have a climate crisis and there is not a lot of time.

Brandy Baker was a volunteer on Saron Gebresellassi’s campaign. She can be reached at: brandy@brandybaker.net

See also: The NDP's election disaster shows again the need for something new on the left
Posted by Michael Laxer at 5:21 PM