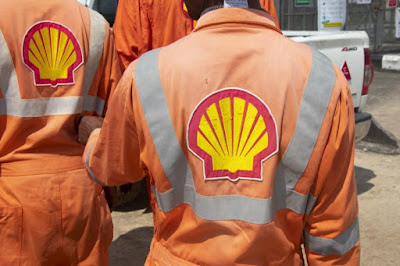 Royal Dutch Shell is one of the world's largest multinational corporations and has long been accused of being involved in human rights abuses in Nigeria. Recently groups like Amnesty International and the international trade union federation IndustriALL have tried to shed light on the history and ongoing record of the company in the country.

On October 8 Amnesty posted about the case before a court in The Hague, Kiobel v Shell, where Esther Kiobel is trying to hold the company to account for its alleged involvement in the arrests and state murders in 1995 of the "Ogoni Nine" that included her husband and the famed writer and activist Ken Saro-Wiwa.

Meanwhile, back in March IndustriALL and the Europe-Third World Center presented a statement to the United Nations Human Rights Council in Geneva, Switzerland regarding Shell's present day Nigerian employment contracting practices. In it they said:


Contract workers at Shell Nigeria are living in poverty, with no job security and poor healthcare that is costing workers’ lives. Contract workers face dismissal if they join a union or ask for a pay rise. They lack safety equipment and risk death in the field...
...Shell is violating the human and labour rights of Nigerian workers with impunity, highlighting the urgent need for an international legally-binding instrument to regulate the activities of transnational companies.

On October 7, World Day for Decent Work, the union federation released a video in an effort to draw attention to the horrific conditions and poverty wages these workers are paid and the constant threat of dismissal or worse if they attempt to organize or fight for their rights.

One worker says "We have been enslaved in a modernized form".