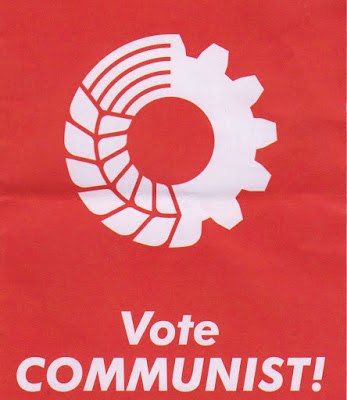 With less than a week to go until election day in Canada, anti-capitalist leftists are in the challenging position yet again that no anti-capitalist candidate -- either an independent or affiliated to a political party -- is going to get elected next Monday.

While there are partisans, and perhaps even a candidate or two, of the NDP who claim it is anti-capitalist this cannot be taken at all seriously given the party's program and history both in office provincially and opposition federally.

Keeping these limitations in mind we need to take a look at what strategy and tactics left socialists and communists can and should adopt, in our opinion, depending on factors such as where they live and what they are trying to accomplish by their involvement in the electoral process.

Vote Communist in 31 ridings and other individual endorsements

In the 31 ridings in this election that do have a Communist Party of Canada candidate they deserve our vote and support. The Communists and their leader Elizabeth Rowley have run an excellent, principled campaign on a comprehensive, irrefutably anti-capitalist platform. We have looked at this before in the posts "People & Nature Before Profit!" -- Communist Party releases its federal election platform leaflet and "The problem is capitalism. The solution is socialism." -- Communist Party campaign launches in Toronto.

Voting Communist sends a clear, direct message to the mainstream "progressive" parties rejecting their bankrupt platforms that do not go nearly far enough in tackling fundamental issues facing us such as grotesque levels of inequality and the threat posed by the climate emergency.

If you are in a riding with an independent or non-Communist party candidate who is also running on an explicitly anti-capitalist platform we would advocate a vote for them as well.

There are also a handful of individual candidates for the mainstream parties with a compelling enough narrative to deserve consideration.

Mumilaaq Qaqqaq (NDP) running in Nunavut would add an exciting and necessary voice to parliament. Sending Rudy Turtle (NDP), Chief of the Ontario Grassy Narrows First Nation, to Ottawa from Kenora would be a call for politicians to move beyond the hollow rhetoric of reconciliation and towards actually doing something to deal with the ongoing, brutal consequences of government colonialism, racism and indifference towards Indigenous peoples. Early on in this campaign the bullies at B'nai Brith tried to get the NDP to dump Miranda Gallo, who is running in Saint-Laurent, due to her activism on behalf of Palestinians. Electing her would be a rejection of the new McCarthyism that some have sought to impose around Israeli Apartheid.

What to do in ridings where there is no Communist or anti-capitalist candidate?

While the Liberals certainly always try to scare you into it, there is no serious leftist case to be made for strategic voting for Trudeau to stop the Conservatives. The Liberal party is a profoundly cynical, ugly, imperialist Bay St party that, while better than the Conservatives in many important and significant ways, is totally undeserving of support. The Trudeau government has reflected this cynicism while in power. There can be no greater symbol of why Trudeau and his government must be rejected entirely than the odious twin pillars of it, Foreign Minister Chrystia Freeland and Minister of Finance Bill Morneau. In no riding in the country should the Liberal get a left vote.

Tactical voting for the Greens or New Democrats in ridings where they have a chance of defeating the Conservative candidate specifically (as opposed to each other or the Liberal) is something to consider.

However, outside of practical riding by riding concerns about stopping Scheer neither of these parties deserves actual support from a leftist perspective and voting for them is an implicit indication of some type of support.

The Greens and the NDP are not that different from each other in any real sense, their platforms are deeply and profoundly flawed and hypocritical to such an extent that you can count on their partisans to distort them to make them appear better, and neither party is opposed to either capitalism or the global western imperialist order in any meaningful way at all. In an age of desperate inequality, unrestrained western interventionism and an existential environmental threat posed by global capitalism, this is not a minor point.

Those on the left who still insist that somehow we must support the NDP due to its "historic" ties to labour or the working-class are engaging in a fiction that may once have had some meaning but is more and more silly and out-of-touch with objective circumstances now with each passing year.

In fact it is both depressing and informative that so many on the left have found one excuse or another to feign enthusiasm for Jagmeet Singh and his lackluster campaign that has benefited only by comparison with the tired Trudeau and the even more lackluster campaign this time out by Elizabeth May.

The party has tried, rather unconvincingly, to slightly mimic the tone of Bernie Sanders (himself a deeply flawed candidate) and the NDP has proven record of never doing what it says it is going to when or if it wins anything. It is worth remembering how the party shifted dramatically rightward under Jack Layton -- an allegedly "leftist" leader -- especially after "winning" opposition.

Ironically, despite the supposed NDP partisan contempt of the Liberals and insistence that they are no different from the Conservatives, the main goal of the NDP now seems to be to win enough seats to make a deal with Trudeau!

In a riding where the Greens or the NDP have no chance of winning or where the Conservatives pose no threat why reward their liberalism, inherent imperialism and fundamental embrace of capitalism? What will this achieve in advancing the cause of working people and socialism? Nothing.

In fact, leftists continuing to waste their energies on the NDP (or now the Greens) despite decades of evidence in and out of power that this is a totally bankrupt dead end can only be seen as tremendously futile and counter-productive. A kind of crutch and excuse to which many return that prevents the emergence of a serious mass anti-capitalist alternative.

And just because the Liberals are genuinely awful and the Greens are only aspiring to be as milquetoast as the NDP has been does not make Andrea Horwath disciple Singh anymore interesting or "leftist".

In a riding where there is no Communist or anti-capitalist candidate, where the Greens or NDP have no chance, where it is a Liberal - Conservative race or where the Conservatives pose no threat we would suggest considering a conscientious, principled abstention and rejection of the sham of mainstream politics by either staying home or by spoiling your ballot.

Posted by Michael Laxer at 8:50 AM