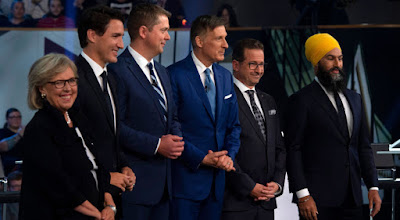 This is the fifth of our weekly Friday election round-ups of developments -- as well as the inane, bizarre, humorous and unusually facile -- in the great show that is mainstream bourgeois politics during the election of 2019.

As always after such events there was almost as much debate as to who won the last English and French leader debates as there was in the debates themselves! There seems to be a consensus that NDP leader Jagmeet Singh had a good night at the English debate while the French one was stronger for Trudeau and Bloc Quebecois leader Yves-François Blanchet.

In truth, while Singh likely had the best lines at the English debate the format was terrible with far too many moderators and a set-up that ensured much of the time was wasted with leaders talking all over each other. The French debate went better in terms of format but was not a good night for either Singh or Elizabeth May, the leader of the Greens. Most of its most interesting moments were in exchanges between Justin Trudeau, Andrew Scheer and Blanchet.

The importance of debates are often overstated by partisans of the parties who are far more interested in them than most of the public is. They do often serve to reinforce existing trends though and this seems to have happened here as well.

This is bad news for both May and Scheer.

The Greens came into the election really surging but have run a very poor campaign as these things go, with much of the wind coming out of their sails. May was not great in either debate and the threat the Greens posed to displace the NDP as Canada's third party and as the "progressive" left flank of the Liberal party seems to have faded.

Blanchet and the Bloc, meanwhile, are offering Quebec voters a nationalist and Quebec focused alternative to the federalist options. A solid campaign and debate performances have revived their fortunes largely at the expense of the Conservatives and, to a lesser degree, the NDP. Scheer helped this along by making it very clear he had something to hide on the abortion issue in the first debate, making it much easier for small 'c' conservative voters in Quebec who are not socially conservative to begin to view Blanchet as a natural fit.

Unfortunately for New Democrat partisans who heralded Singh's performance and the party's small bump in the polls as the beginning of a Layton style surge, the conditions are very different from those in 2011. Layton benefited from the collapse of the Liberal vote due to the horrible campaign of Michael Ignatieff and from voter fatigue with the Bloc in Quebec.

The Liberal vote is not collapsing this time -- at least so far and there is not much time to go -- and the Bloc is surging. What Singh's good campaign and debates has done, it seems, is to bring the NDP back from the brink of annihilation largely at the expense of some of the Liberal left vote and what was Green momentum going in. The NDP still stands to lose almost all or all of its seats in Quebec though it may now hold or even gain a bit elsewhere.

"Why is it that we ask the question about whether or not Indigenous people should have clean drinking water?"


After pointing out the billions the government squandered on tax cuts and pipelines NDP leader Jagmeet Singh has what is likely his finest moment when he turns the tables on a stupid media question.


Of course, Singh has his own hypocritical problems when it comes to Indigenous rights. His unwillingness to take a clear stance on the LNG project being pushed by the NDP government in BC is just one example of this.

Liberal candidate for Humber River-Black Creek Judy Sgro set a new standard for liberal white cluelessness with her comments about the Trudeau brownface scandal to a Toronto radio station interviewer.

Sgro actually tried to claim that her Black constituents were sending him more "love" for what he had done! Seriously:


But let me tell you that in knocking on doors and being in the plazas and talking to people to make sure that I’m as sensitive as I need to be, if I missed something … and those in the Black community have told me how much more love they have for the prime minister, that he wanted to have a black face — he took great pride in that too and that it’s the media that have blown this into something that it shouldn’t be, and that they are very supportive and they’re actually looking for finding more ways that they can show how much they support and love the prime minister.

She has apologized for this astonishing and grotesque comment and remains a Liberal candidate despite it.

Liberals show, yet again, that their commitment to "reconciliation" is rhetorical

This move "could block billions in compensation to Indigenous children" that is long overdue.

Unfortunately he is unlikely to get his wish.

Other readings on this issue:

Taking on Canada's "Minister of War"


The hypocrisy of Canadian foreign policy under Freeland and the Trudeau Liberals cannot be explained by a love of human rights or humanitarianism. Their policies can only be explained by Canadian business interests, especially mining and arms deals, and their ever-closer alliance with an increasingly belligerent US government.
The world cannot afford another four years of Chrystia Freeland and neither can Canada. The Trudeau government’s pledge to raise military spending by 73% over the next eight years, prompted by Trump’s request to NATO countries to pay up, will result in deeper austerity and suffering at home and more war abroad. Freeland represents the worst the Liberal Party has in the way of war mongers and she must be defeated as a step towards winning an independent foreign policy of peace and disarmament.

You can watch Garvie, who is running against her federally, take her on at a local debate in the video below:

LOL! The knives are already out: Conservatives Reportedly Might Already Be Shopping For A Scheer Replacement

Rumours Of A Suppressed Globe Story About Justin Trudeau Are Bullshit

Tossed Tory candidate ‘changes everything,’ with two-way fight shaping up in Burnaby North-Seymour

Singh lays out the NDP’s priorities for next Parliament

WHERE HAS LABOUR BEEN DURING THIS FEDERAL ELECTION CAMPAIGN? 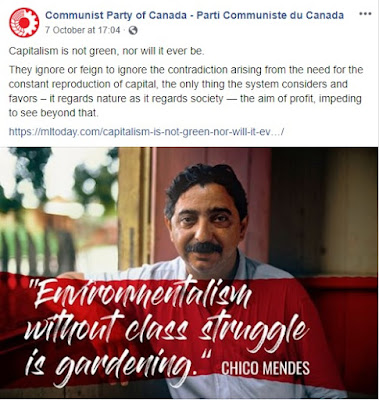 Posted by Michael Laxer at 8:19 AM