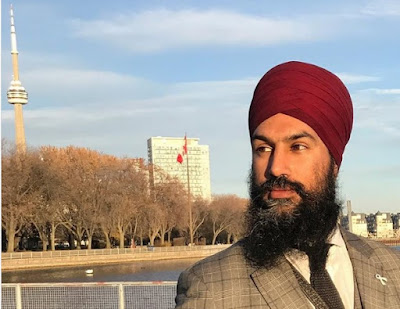 The NDP's Toronto federal election results really put the lie to a number of the narratives their partisans and organizers are trying to spin.

Already the line -- also adopted by a surprising number of "left" commentators outside the party -- that the NDP would now be more "powerful" even after losing over 600,000 votes and 20 seats because "it will hold the balance of power" has been shown to be an illusion.

Justin Trudeau very quickly ruled out any type of coalition and why wouldn't he. Only needing 13 votes to pass legislation he can turn to the Bloc Quebecois, the NDP or even the Conservatives in some cases. None of the parties will really want to fight another election too quickly for a variety of reasons so it is pretty safe to say the Liberals are likely to get at least a couple of years out of this minority without the need of explicitly pandering to the NDP at all even if you assume the NDP would have pushed a radical agenda in exchange for its support which I do not.

The case of the NDP backing austerity budgets during the minority Liberal government in Ontario shows that their price can usually be had pretty cheap.

There has also been a tendency in some quarters to try to say the party's lackluster results are due largely to "racist Quebec". Dave McKee deals with this bogus line very effectively in the People's Voice piece "ELECTION RESULTS NO EXCUSE FOR NATIONAL CHAUVINISM". As McKee notes:


Upon seeing that the NDP had been reduced to a single seat, CBC anchor opined, “It is fair to also ask whether Quebec was ready for a person of colour to be leading a party.” When Chantal Hebert pointed out that the Bloc Quebecois “ate [all of] the Liberals, the Conservatives and the NDP,” Barton quickly moved to another question. Whereas elsewhere in the country, the NDP’s poor results were packaged into somewhat understandable or even supportable excuses, its near wipeout in Quebec was immediately attributed to racism.
Never mind that Maxime Bernier, leader of the ultra-right racist People’s Party was trounced in the Quebec riding he’d held since 2006. Never mind that a key issue for Quebecers is supply management in agriculture, a system the Bloc squarely committed to defending. Never mind that the same CBC election broadcast included a clip of an anglophone Canadian saying of Jagmeet Singh that “people aren’t ready for his [points to her hair] religion.” And never mind the numerous incidents of racism that Singh directly encountered in English-speaking Canada, virtually all of which were celebrated as examples of the NDP leader’s “principled response” rather than condemned as examples of xenophobia.
The narrative that “Quebec is the racist core of Canada” is not confined to CBC or other media pundits. It has, unfortunately, been echoed by some on the political left, with comments ranging from a smug tsk-tsk to outright bigotry against Quebecers. Much of this discourse seeks cultural evidence by pointing to Quebec’s “Law on the Secularism of the State”, Bill 21, which bans most public workers from wearing or displaying religious symbols and is widely understood to be focused on Muslims. But the legislation has received a lot of opposition within Quebec.

Obviously NDP partisans are upset that the big upsurge in support they were insisting was occurring, despite the rather scant evidence for it, did not happen. If not scapegoating Quebec they have also turned to the notion that "at the last second" voters in places like Toronto changed their minds and voted Liberal out of fear swinging ridings to Trudeau that Singh and crew had been about to win.

To some extent this probably did occur, though as we will see this is a deeper trend than New Democrats might want to admit and cannot be used to explain everything away. Despite their protestations that the NDP was running on a truly "left" platform that was resonating with voters there was actually no indication that this was the case going into the election at all.

In fact, despite knowing when the election would occur the NDP was totally disorganized, its headquarters obsessively blocking or ghosting potential nominees for months meaning they had many ridings with no candidates just a few weeks or even days before the writ dropped, and far from having done the work to build momentum on the ground or in the streets that you need to do to promote a transformative platform the party was only saved from oblivion by the combination of a terrible outing by the Greens and a good couple of weeks from Singh.

The NDP's fate is always tied to electoral shifts like this as it eschews any meaningful movement orientation between elections of any kind and has been entirely electorally focused for decades. I still remember NDP partisans confident that Tom Mulcair's strength as a parliamentarian and during things like Question Period would bring victory and impress the people prior to the 2015 election.  Of course it didn't.

With a party's outcomes being based on the whims and short-term currents of bourgeois electoralism you can be up one week and down the next given the reality that most voters do not really think there is all that much that fundamentally separates parties like the Liberals and the NDP.

They are not wrong. Decades of the NDP in "power" in many provinces as well as in opposition have shown this to be a basically sound assessment regardless of whether the NDP brass have decided to cycle rhetorically more left or more centrist in this or that election and in response to this or that trend. So if the one looks the more likely to win than the other many progressives often don't really care either way.

That the NDP's various incarnations over the years have failed to build a serious base of support and left movement in places where they absolutely need it to "win" or to have any true influence on the country's political agenda is made nowhere more clear than in its results in Toronto.

Doug Nesbitt compiled a very telling chart of the NDP's fortunes in the city of Toronto since 1962 federally which I am using here with permission. 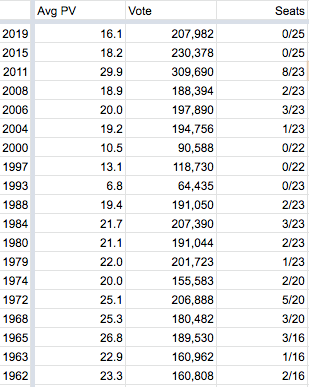 These are not relative numbers they are the NDP's vote and seat wins in absolute terms meaning that in 2019 the party only took just over 1,000 more votes in Toronto than it did in 1972 and won 5 fewer seats. As we all know, Toronto's population is much higher now and there were 5 fewer seats to win in 1972 so this looks even worse once that is factored in.

Not only did the Liberals win far more votes in Toronto in 2019 (681,551) so did the Conservatives (291,776). Only in the riding of Davenport did the NDP come close enough to winning for a last second shift to be a believable explanation for the loss.

Toronto is quite possibly the most diverse city in the world. It is politically progressive overall and given the pressures many Torontonians face in terms of housing, transit, the high cost of living and the consequences of social inequality and stratification, the failure of the NDP to build support that is not ephemeral in it tells a story the party does not seem to want to hear or learn from.

If you spend decades running on platforms that are just ever so slightly to the "left" of the Liberals, that are indistinguishable now from the Greens and that are packaged and framed with all the usual cynicism and "what is in the news this week" electoral thinking of bourgeois party politics then this is the likely result.

The NDP can try to spin the 2019 election as if it is detached from a broader reality all they want. But it is not and the fact that they are getting the same number of votes in Toronto that they did 47 years ago makes that pretty clear.

See also our other related pieces on the 2019 election results The NDP's election disaster shows again the need for something new on the left and No, the NDP losing over 600,000 votes and 20 seats is not a "victory"
Posted by Michael Laxer at 1:45 PM