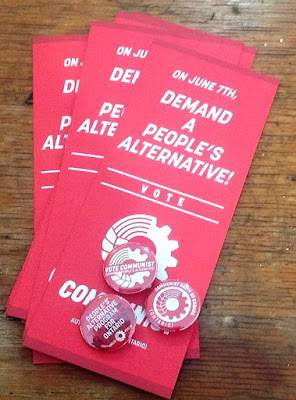 The Communist Party launched their Ontario provincial election campaign Saturday in Toronto. All of their Toronto candidates were in attendance and spoke, including the party's provincial leader Dave McKee.

The party is running on a comprehensive -- and genuinely radical -- anti-capitalist platform that stands in complete distinction to the campaigns we are seeing from the three mainstream, bourgeois capitalist parties.

The launch, held in a hall on the Danforth, began with a speech from Toronto Danforth candidate Ivan Byard who talked about the need for a new deal for cities in Ontario among other things.

Parkdale-High Park candidate Jay Watts followed emphasizing the efforts the Communists have made organizing with tenants in Parkdale as well as touching on housing issues more broadly. He also noted that he would be participating in an all-candidates debate with the NDP, Liberals and Greens at the Parkdale Public Library on Monday, May 14 at 7 pm. The Conservative candidate is not expected to attend.

Dave McKee, who is running in Davenport, ended with a rousing, fiery speech that spoke of the central pillars of the party's platform including the economy, housing and other essential services, and real progressive tax reform.


McKee began by noting that there is a genuine desire for change among the people of the province, but that this notion of "change" has become depoliticized. If it is simply change for its own sake it is nothing more than changing "the jockey on the same old horse" and will likely benefit the Tories and Ford. In contrast to this McKee said it was necessary to re-politicize the idea of change and to build a working class movement around it.

McKee then went on talk about all of the three main parties making it clear that the Conservatives under Doug Ford constitute a very serious threat and that his election would result in an "immediate attack" on workers, women, racialized and marginalized communities in Ontario. He emphasized this by pointing to
Ford's socially conservative positions around abortion rights and the sex-ed curriculum, his positions on the environment, the minimum wage, tax cuts for corporations, slashing social spending and a number of other points.

Yet, McKee pointed out that the two alternatives to Ford that could possibly be elected on June 7, the Liberals or the NDP, are running on platforms that are "weak, insufficient and timid".

McKee reviewed the dismal record of the Liberals and Kathleen Wynne including such points as the 15 years of starving health care funding -- Ontario has the lowest per capita hospital funding in the country -- and the privatization of Hydro One despite the opposition of around 75% of Ontarians and the mass mobilization against it.

Meanwhile the NDP, to McKee, lie "just incrementally to the left" of the Liberals. The NDP pharmacare plan he sees as "totally insufficient" noting its very limited nature. "Why would we accept a plan that is half-baked?" he asked to loud applause.

He then pointed to the NDP's dental care plank which is not universal but rather two-tiered.To McKee this two-tiered aspect undermines the essential principle of universality in health care and social programs. The same is true of the NDP's childcare plan which is means-tested.

"Is that universal? No. Is that progressive? No." McKee said.

The Communist Party, however, wants to mobilize around a "strong list of working class demands".

These include a shorter work week with no loss in pay as part of a broader full employment strategy. McKee touched again on housing noting the Communist Party is the only party with a serious plan aimed at "confronting and resolving the housing crisis." 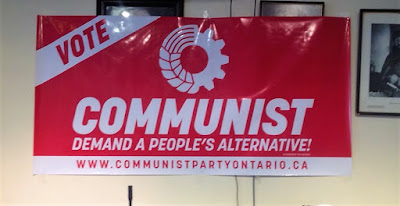 The party is also in favour of a $20 an hour living wage as opposed to the bare subsistence level that even the $15 an hour minimum wage represents. "Why are we talking about minimums? Why are we not talking about what's needed?" McKee asked.

McKee brought up the party's staunchly anti-capitalist vision to prevent plant closures and corporations trying to move factories to low-wage jurisdictions. "If you leave we are going to take over your business and we are going to run it."

To McKee one of the essential issues confronting Ontario is the need for radically progressive tax reform. Far from paying their fair share, McKee says that "corporations are stealing public money."

The Conservatives, of course, are calling for tax cuts cuts. McKee says the Liberals are not even talking about the issue. Meanwhile the NDP advocates for a tiny 1.5% increase in corporate taxes and talks about how this would remain "competitive" with Trump's new rates. For McKee this is the NDP putting "fiscal responsibility and capitalist competition ahead of the needs of the working class." 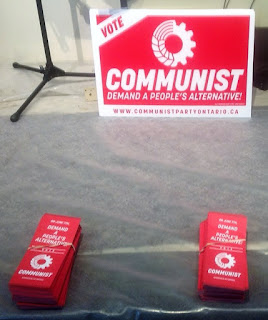 Tax cuts since the Harris era, the Communist Party relates in its leaflet, have cost the government of Ontario $18 billion in annual revenue. The party proposes to reverse this by "doubling the corporate tax rate and reversing tax cuts to the very wealthy." McKee emphasized the importance of this by saying that "we have to resolve the revenue crisis" in Ontario.

As for any attempt by corporations to refuse to pay, McKee says that "If the corporations don't pay we will take them under public ownership."

McKee talked as well about other aspects of the party platform including their commitment to fare free transit, ending public funding of Catholic schools, justice for Indigenous Peoples, a socialist approach to environmental justice, and fighting for the equality rights of women and people from racialized and LGBTQI2S communities.

While he said this in reference to health care, I think he summed up many aspects of the Communist platform more broadly very well when saying "It's just about treating people with dignity."

He also touched on the need to build a mass movement and alliance to fight against Ford and the deep cuts and attacks that we can anticipate should he become Premier. He noted that the Communist electoral campaign and the issues it is raising is a part of that saying "We are campaigning for June 8, June 9, and on"

The speech ended with an inspiring call to "ignite the movement for socialism", one of the party's election slogans.

The Communist Party is running 12 candidates province wide all listed below: 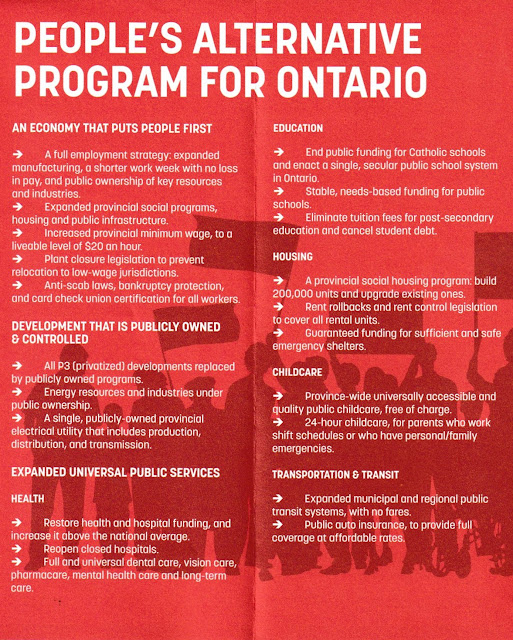 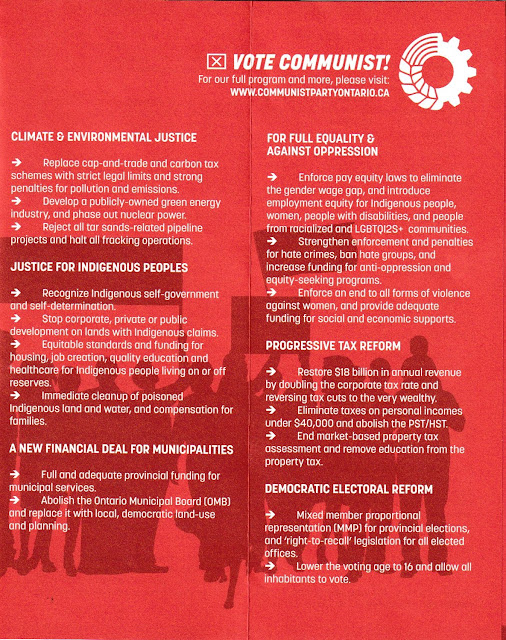 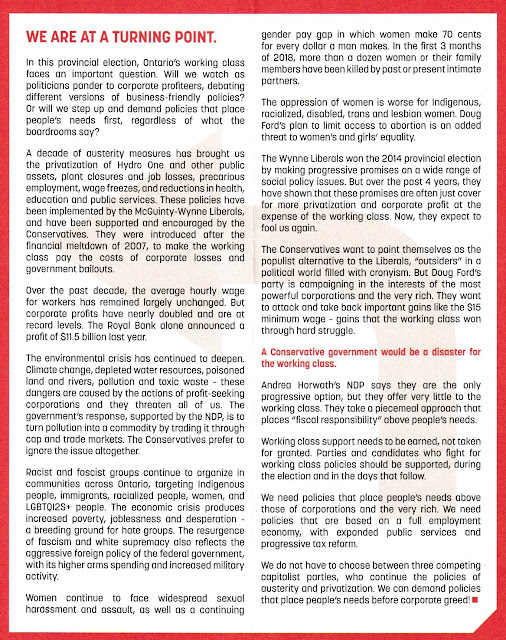 See also: Deep ennui greets launch of an Ontario election that is Ford's to lose
Posted by Michael Laxer at 6:27 PM