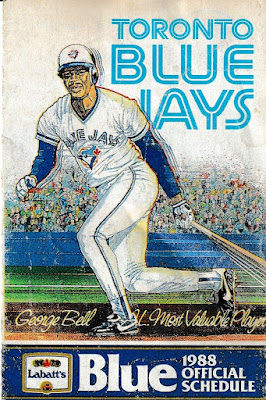 Today is a post that is something of a different kind of vintage or TBT than is the norm on The Left Chapter!

As a big fan of baseball generally and the Toronto Blue Jays specifically I was thrilled recently to stumble across an old, pocket-sized 1988 schedule for the team.

1988 was an interesting year for the Jays. In 1985 they had won their first American League East Championship and in 1987 they had looked sure to win a second. They were 3 1/2 games up on the Detroit Tigers with only a week to go in the season...but they blew it. They lost seven in a row including two final games to the Tigers themselves and were knocked out of the playoffs.

In 1988 they ended up in third in the AL East with a record of 87-75. It ended up being the last season for Jimmy Williams as manager. He was replaced by Cito Gaston the following year. Gaston, of course, would lead them to greatness with two back-to-back World Series wins in the early 1990s.

1988 was also the last full season the Jays played in the terrible Exhibition Stadium, with its awful sightlines and ludicrous outfield seats. It was a stadium that had not been built for baseball and it showed! The Skydome opened mid-way through the 1989 season.

George Bell -- who had something of a love-hate relationship with the Toronto media and fans --  is on the cover of the schedule having won the American League Most Valuable Player award in 1987.

For the record, on this day in 1988 exactly 30 years ago, the Blue Jays played the Texas Rangers. It was a Tuesday night game at home. The Jays lost 7-6. 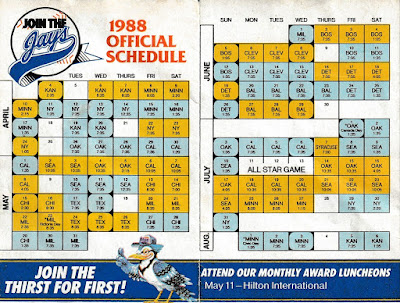 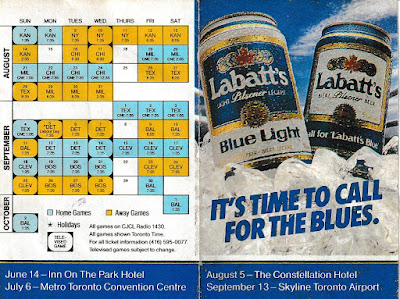 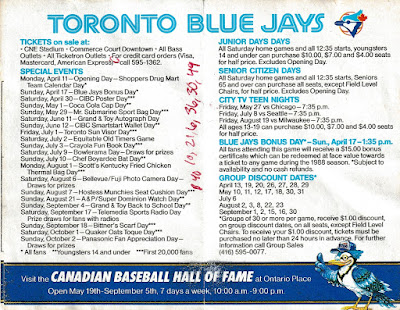 The giveaways are a real throwback with brand sponsors like
Bowlerama, Hostess, Dominion and events like a "bring your radio" day. 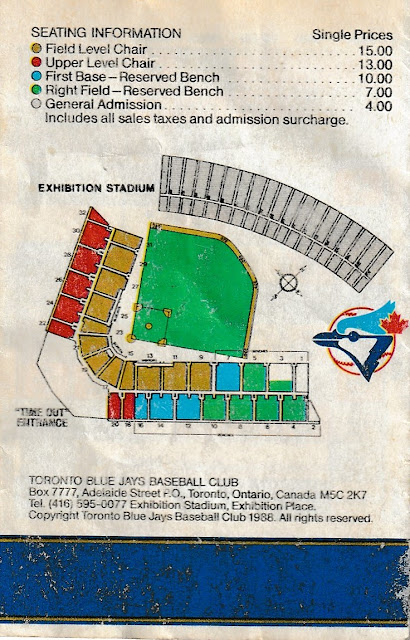 The seating layout of the truly awful Exhibition Stadium.
I have many, many fond memories of going to games there as a kid and teen...but no nostalgia for the venue itself!
Posted by Michael Laxer at 10:14 AM