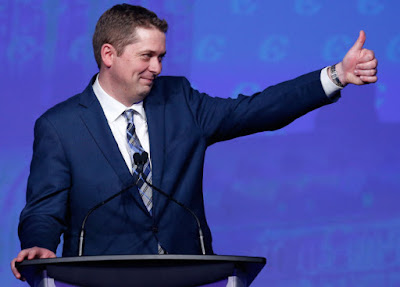 "As mass killings horrify the world, Netanyahu’s circle dwindles" is the headline of a Doug Saunders article in The Globe and Mail...but that circle certainly still seems to include the Conservative Party of Canada (CPC).

At least 62 Palestinian protesters were massacred on Monday alone by Israeli forces. Thousands were wounded. Since March 30, 15 children have been killed by the Israeli army. As a result "The United Nations' top human rights body has voted to send a team of international war crimes investigators to probe" these actions.

Only two member states voted against this, the United States and Australia.


...there is no legal justification for anyone to shoot at children under any circumstance.
"According to international law, a child is a child, first of all, no matter what brought them there," said Boutin.
"At this point, the United Nations has been clear — many journalists have observed this — they're largely unarmed and they're quite far away from the soldiers. So for us, they're all child deaths that should have been avoided."

The Committee to Protect Journalists reports that at least seven Palestinian journalists were shot and wounded by the Israelis.

Canadian Dr. Tarek Loubani was shot and wounded despite the fact that he says he was "'clearly marked' as a doctor".

Doctors Without Borders called what happened this week "unacceptable and inhuman". They stated "The death toll provided this evening by Gaza health authorities...is staggering. It is unbearable to witness such a massive number of unarmed people being shot in such a short time."


Screenshots from email titled "This is shameful"
sent from peter.kent@conservative.ca
Saturday May 19, 2018 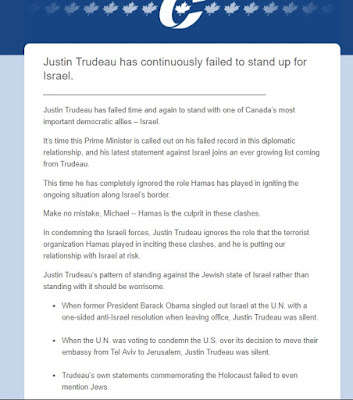 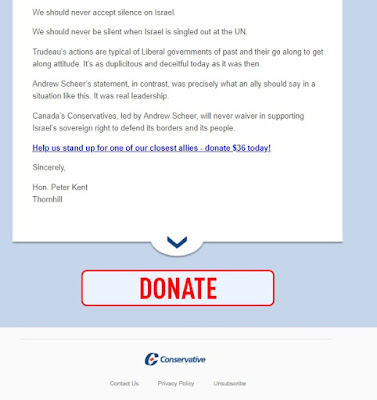 Of course this letter does not note that Trudeau has hardly been a critic of Israel historically. In fact, a recent opinion piece in The Globe and Mail was titled "On Israel, Trudeau is Harper's pupil".  The letter does not note that even after the massacre his Foreign Affairs Minister Chrystia Freeland refused to specifically condemn Israel saying instead: "All parties to the conflict have a responsibility to ensure civilians are protected."

It does not note that virtually every other major Canadian ally in the world opposed Trump's disgraceful decision to move the US embassy in Israel to Jerusalem.

But, of course, nothing but unequivocal support for the Israeli regime and Benjamin Netanyahu is good enough for the Conservatives.

And even after the slaughter this week they are hoping you will send along $36 saying that you agree.

Posted by Michael Laxer at 9:43 AM