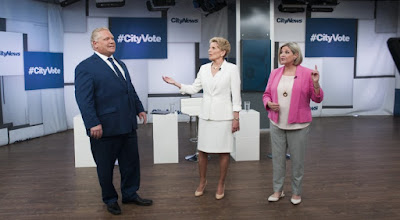 With all of the major party leaders having come off a largely anemic and uninteresting television debate in Toronto, the Ontario provincial election has now officially begun.


While it is shaping up to be an election as much about the leader of the opposition as about the Premier, what is very telling is just how totally unenthusiastic many Ontarians are about the choices facing them. A poll released today found that fully "74 per cent of voters across all parties wish there was another option other than Liberal Leader Kathleen Wynne, PC Leader Doug Ford and NDP Leader Andrea Horwath.".

Admittedly the poll is somewhat disingenuous as there are, in fact, other options on both the right and the left, but setting that aside it is still a startling result.

While New Democrats have been pushing the narrative that Andrea Horwath is the most "popular" leader this seems to be only by default:


Pollster Darrell Bricker said while Horwath has an advantage on the favourability front, it’s more “neutral” since the other two have fairly high negative favourability.
“Andrea Horwath comes up better because she’s less disagreeable, not because she’s so much more likeable,” Bricker explained.

Despite attempts in some quarters to claim that the NDP has shifted back more to the "left"-- with an allegedly exciting, popular platform -- it would seem that the public is as yet failing to see great differences between the Liberals and the NDP.

For the NDP there is an obvious opportunity to gain traction with a Premier whose unpopularity remains at historic levels and with the leadership of Doug Ford terrifying to many voters. So far, though, the progressive vote has yet to consolidate behind either the Liberals or the NDP. The CBC poll tracker (as of May 8) has the two parties at virtually identical levels of support with 26 per cent each.

This likely has a lot to do with the fact that little fundamentally separates the two parties, regardless of what the partisans may say. The very fact that this is open to question shows this. Both collaborated together during the Liberal austerity budgets of 2012 and 2013, both ran very centrist campaigns in 2014 and both have tried to come out with competing big progressive announcements in recent months.

The Liberals brought in a much higher minimum wage and the most sweeping labour law reforms in a generation last year. The NDP and the Liberals both have deeply flawed "pharmacare" plans, though the Liberal OHIP+ plan is actually in place. The NDP's dental care plan is clearly more comprehensive though their childcare plan is not free and lacks the universality of the Liberal plan. That it would apply to all children eventually as opposed to those only between the ages of 2 1/2 and kindergarten hardly compensates for that. Means tested childcare would be an entrenched and more regressive vision of "affordable" childcare than an age-based free and universal one that can be expanded later.

Where the NDP has staked out turf that more solidly differentiates them is when it comes to opposing further privatization and calling for Hydro One to be brought back into public hands as well as in calling for some minor increases in taxes on the wealthy.

The NDP's potential advantage lies with the fact that their plans are unencumbered by a profoundly unpopular leader, the voter fatigue that comes from having been in power for 15 years and the whiff of corruption that hangs around the Liberals. Whether or not Horwath can make real inroads based on this remains to be seen.

Doug Ford unquestionably poses a serious threat but he also has benefited greatly from a very unusual political moment.

In this era of truncated narratives which of the two bourgeois progressive parties will emerge as the primary opponent of Ford, if either of them do, will depend on a number of variables -- including how the inevitable calls for "strategic voting" play out -- that are hard to predict though any momentum would appear to be with the NDP out of the gate.

The deep ennui that exists among the public is quite understandable though and stems from the broad, and broadly correct, assumption that any alternative to the highly destructive Ford agenda that has any chance of getting elected in June differs the one from the other far less than they would have you believe.

This fact is part of what makes the rhetorically populist change offered by Ford so nominally appealing in the circumstances even to many to whom it would bring great harm.

The Left Chapter will be offering ongoing analysis of the upcoming Ontario provincial election including an upcoming weekly round-up of news and developments.

Doug Ford wants you to subsidize the poverty wages of corporations

Horwath's campaign announcement a failure to differentiate for the ONDP

Ten myth-busting articles about the minimum wage in Ontario
Posted by Michael Laxer at 2:41 PM