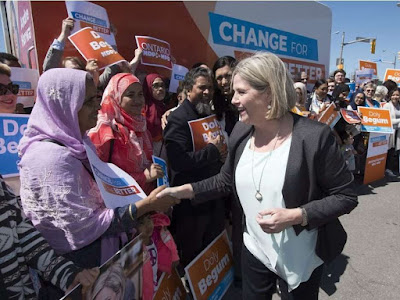 The provincial election campaign in Ontario is now a week old and with only three weeks to go until election day the desire to "change" who is arranging the deckchairs on the Titanic appears to be strong enough that the tired Liberal regime's fate may well be sealed.

Momentum has swung, at least for now, to Andrea Horwath's New Democrats as the primary alternative to the looming Doug Ford catastrophe, though not so much due to any great enthusiasm on the part of Ontario voters but rather due to the paucity of choices.

In this, the first of what will be weekly The Left Chapter round-ups we look at this past week's themes, news and developments.

A poll taken as the writ dropped found profoundly deep voter dissatisfaction with the various mainstream "choices" on offer. Almost three-quarters of those questioned said they wished "there was another option other than Liberal Leader Kathleen Wynne, PC Leader Doug Ford and NDP Leader Andrea Horwath."

This same poll also found that while it was true that Horwath was the most "popular" leader (or perhaps least unpopular) this was not based on any great embrace of her leadership by the public:


Pollster Darrell Bricker said while Horwath has an advantage on the favourability front, it’s more “neutral” since the other two have fairly high negative favourability.
“Andrea Horwath comes up better because she’s less disagreeable, not because she’s so much more likeable,” Bricker explained.

I looked at what this poll meant and its broader implications in the piece: Deep ennui greets launch of an Ontario election that is Ford's to lose

The polls all seem to agree that the NDP is surging right out of the gate. With Kathleen Wynne remaining deeply unpopular -- out of all proportion to the actual popularity of the government's recent polices and budget going into the election -- Andrea Horwath and crew seem to be shaping up as the progressive alternative to Ford in the minds of voters.

Upward trends very early in a campaign can be a double-edged sword as they leave plenty of time for opponents and the natural evolution of events to bring these numbers back down. There are countless examples of opposition parties going into elections much stronger than they finished them, the Tom Mulcair led federal NDP in 2014 being a case in point.

But there at least two reasons that NDP partisans can hope that the trend in this case may have staying power.

The first is the aforementioned general dislike for Wynne and the sense that her government should be sent packing. There comes a point -- as happened with the Rae government in 1995 -- where, as Globe and Mail analyst Adam Radwanski put it "If voters aren’t willing to buy what Wynne’s Liberals are selling, none of their advantages matter."  He further noted, when referring to Wynne's slick new ads "All the production values in the world can only go so far if voters just don’t want to hear from you any more."

How low could Wynne and the Liberals drop in the polls? Very low indeed. And a great deal more of their vote is likely to go to the NDP than the Conservatives.

Which brings us to the second reason for optimism among New Democrats, which is that it is rather easy to make the transition between them for centrists and mild progressives in this context as there so little that separates the two parties ideologically.

It is akin to dropping Coke in favour of Coke Zero.

While in most cases this would hurt the NDP -- and has time and again including in Ontario in the 2014 election -- here it allows them to transition to being a new and nonthreatening liberal party for voters scared of Ford but tired of Wynne's baggage.

As Thomas Walkom put it in the Star "Experts can parse the differences between the Liberal and NDP child care or pharmacare promises. But I suspect most voters see the two party platforms as near-identical."

Various NDP partisans may have deluded themselves otherwise, but I suspect Walkom is right.

Of course, the other side to that is that should Wynne somehow regain her footing or numbers start to trend back her way, the transition back to the Liberals from the NDP would be just as effortless.

Either way, with the Conservatives remaining steady at above 40% support the two parties are right now vying for who would be the official opposition to a massive Ford majority unless they can bring that support level down.

Doug Ford says he prefers the "market" to rent control

If you thought the housing market with soaring rents and low availability could not possibly get worse for tenants in Toronto, you would be wrong.

If Doug Ford gets elected they will get much worse.

Despite the fact that they only have their positions thanks to Wynne's short-sighted and deeply unpopular decision to privatize the bulk of Hydro One, the dim bulbs running the show there seem determined to tank her government.

How else to interpret the news that in the lead-up to an election where hydro rates are a central issue the part-time members of the utility's board of directors gave themselves a big raise?

Of course, while Doug Ford pontificates about replacing these clueless rich people with his own group of clueless rich people, Andrea Horwath is correct in saying that the only long-term solution to hydro issues in the province is to bring Hydro One back into public hands.

That it will then be run in a fundamentally more democratic or egalitarian way under an NDP government, however, seems unlikely to say the least.

The Green Party launched its campaign in Toronto running on a fairly progressive platform that you can read on their website. The prospects that there is room for a third mildly progressive party to gain traction in an election like this one would appear bleak.

What is clear though is that the media and the other parties are doing their best to make sure they remain that way with the Greens being shut out from the debates.

Party leader Mike Schreiner confidently predicted "We are going to make history and we are going to elect Ontario's first Green MPPs". Regardless of whether or not that would be a good thing, at this point it would not seem to be in the cards.

Two major parties run candidate slates that are over 50% women

In an historic development two of the major parties running candidates province wide have slates that are comprised of over 50% women.

The NDP lead the pack at 56% while the Greens followed closely at 52%.

While we are in an election where "change", as Ontario Communist Party leader Dave McKee put it,  really amounts to putting a new "jockey on the same old horse", the Communists launched their campaign on a platform that offers a genuine, unequivocally anti-capitalist vision.

I attended their campaign launch in Toronto and you can read about it at: Communist Party launches Ontario provincial election campaign in Toronto -- "Ignite the movement for Socialism"

Further news/articles of interest about the campaign:

Another debate, another Doug Ford comment about Kathleen Wynne's smile

No longer polling third, Horwath and the NDP are fending off attacks from both sides

NDP's Horwath has 'no interest' in coalition with Liberals

See also: Doug Ford wants you to subsidize the poverty wages of corporations
Posted by Michael Laxer at 9:42 AM