Vote NDP to stop Ford...but don't try to sell it as supporting a leftist agenda 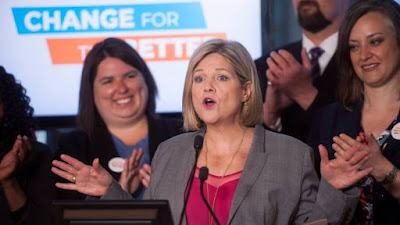 As the ONDP led by centrist neo-liberal Andrea Horwath rises to new heights in the polls thanks to being seen as the "least bad" alternative to the Doug Ford insanity or the history of corruption by the Liberals, one salient question remains.


Why on earth are some leftists lining up enthusiastically to support her after her history as leader and the ONDP's transparently opportunistic stances that only the careerists and the willfully blind cannot see through?

How can leftists be excited -- except about the idea that Ford might be defeated --with the possible election of a party and leader entirely of the same ilk as Dexter, Notley, Horgan, Romanow and Doer?

Is Horwath a better alternative to Ford? Unquestionably so.

Is she better than Wynne? Given the circumstances, perhaps mildly. Especially if she seems likely to stop Ford, which she now might due to a fluke of circumstance.

Can she or an ONDP government be trusted to deliver anything remotely like their already mundane platform let alone a left agenda?

Only if you are dreaming in an election group think haze induced orange.

The ONDP platform is, at best, a tiny smidgen to the "left" of Wynne's. Much of this platform -- including the atrocious, gets worse as you read the details, vague, phased in, means tested childcare plank -- was clearly drawn up on office napkins when these least imaginative of all social democrats were caught off guard by announcements by a liberal party they wish they could replace.

Even her most outwardly "left" plank of bringing back Hydro One into public hands is based on a nonsensical, years long "buy back" formula and will have little immediate impact on hydro rates which anyone who knows anything about how they are set would understand.

But why advocate for an actually radical vision of public ownership of a utility when you can delude folks with a totally nonthreatening one?

The NDP's pharmacare plan does not even approach "universality" while its dental care plan openly eschews it.

"Change for the Better" in this case really means no change at all, just liberal governance without the Liberals. In this specific context that might work well electorally, but it is not leftism.

After her support of two Liberal austerity budgets and her campaign in 2014 how anyone could think Horwath had some conversion to socialism on the road to Toronto is beyond me.

As to those who claim that the Liberals and the Conservatives -- in this era where the right has shifted to the very far right -- are the "same old story" while the NDP are some radical alternative, they are either being intellectually dishonest or are complete idiots. Take your pick.

Any ideological differences between the ONDP and the Liberals are minuscule. They do not even exist in a serious sense. Should Horwath win, it will take exactly no time for this to become apparent.

It is always easier for some leftists to take the lazy route when jumping on another dead end NDP bandwagon as they have done time after time after time -- all while demanding that everyone else also drop their critical lens to join the mindless stampede to nowhere new -- claiming "this incarnation will be different", than to take the intellectually consistent and honest step of  saying, "no it won't" even if advocating for a tactical NDP vote.

It won't be different.

You can rest assured, and so can Bay St., that should the NDP sweep to power on June 7th, little will change, especially versus the Wynne agenda of the last year or so.

There is a segment -- sadly rather sizable at times like this -- of the Ontario left that like to talk a good game about folks like Corbyn or Mélenchon, the need for the type of serious socialist politics we see emerging in so many other countries, the need to get past the old patterns of a fundamentally bankrupt and undemocratic NDP, but who then line up to bleat out like sheep in support of transparently third way leaders like Horwath.

They talk radical two years out but tow straight-up centrist lines at election time and demand everyone else do as well. They claim those who remain critical are somehow trying to undermine something noble or are cynics.

Yet there is nothing more cynical than trying to sell what the NDP is peddling as a seriously different or compelling radical vision for "change".

Vote NDP to stop Ford if that makes sense for you in whatever community you are in.

But don't try to pretend this is a vote for anything other than a liberal platform from a party that will govern in exactly the way such a platform implies.

Posted by Michael Laxer at 9:19 PM