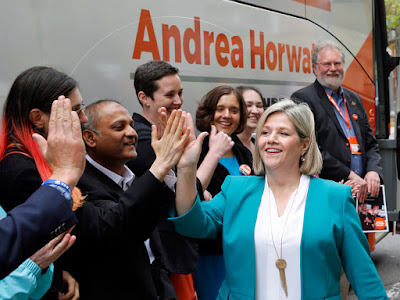 While not the total fiasco out of the gate that was Tim Hudak's rapid derailment of the Conservative campaign in 2014, the scent of scandal and promises and pledges that simply don't add up seem to be putting a dent in what appeared to be an insurmountable Ford lead.


The anti-Ford vote, however, is not coalescing around the Liberals and Wynne but rather around Andrea Horwath and the New Democrats, exposing the bankruptcy of the government's re-election strategy.

As the NDP rises though so too do the attacks on them that are being made from predictable angles aimed at weaknesses of the NDP's own making.

In this, the second of our weekly The Left Chapter round-ups we look at this past week's themes, news and developments.

There is a deep historical irony that it would be the 407 toll highway -- handed to the private sector for a relative song by Mike Harris in the 90s in one of the worst privatization deals in the history of the country -- that is causing the Conservatives to go off message and stumble just when they looked to be certain to form government again for the first time in 15 years.

Having based their campaign in no small part around the need to clean up alleged Liberal corruption, the dangers of doing so become apparent when scandal begins to hover over your own party and campaign as well.

In this case Ford and the Tories have come under scrutiny after a Brampton candidate was forced to resign due to the alleged inappropriate use of personal data gleaned from 407 users for political purposes. The question is how widespread this was and if other Conservative candidates used the data as well. Police and the province's privacy commissioner have launched investigations.

You can read more about it via these articles:

For Doug Ford math seems to be hard

When it comes to explaining how he plans to deal with the loss of billions of dollars in government revenues due to his proposed tax cuts of various kinds without slashing public sector jobs and social programs, Doug Ford simply does not have an answer.

Presumably Ford thought he could just coast along like his brother Rob did with pseudo-populist rhetorical nonsense about "gravy trains" and "efficiencies" but it seems Ontarians are paying a little more attention to reality than Torontonians did during the 2010 municipal election.

His so-called "middle class" tax cut -- which unsurprisingly appears to mostly benefit the wealthy -- will cost the province $2.6 billion.

His plans to cut gas taxes and scrap cap-and-trade will lead to the loss of at least $3.2 billion.

Then there is the corporate tax cut. That would see another $1.4 billion vanish.

How is he going to make up for this lost revenue without a vicious austerity agenda? Who knows?

Ford, of course, has not been willing to seriously answer questions about this from day one. He began the campaign by acting like a defensive bully replying pathetically with “Very simple. You haven’t done it. I’ve done it. That’s the difference. Next question” to CBC reporter Robyn Bresnahan's totally legitimate question about how he could cut as much spending as he claims he can without cutting jobs.

He has been doing the smoke and mirrors deflection routine ever since.

The NDP is quickly gaining on the Conservatives according to many recent polls. The CBC poll tracking data has them at 33.4% compared to the Tories at 38%. The Liberals remain mired in the doldrums at 23.1%.

One poll by Ipsos Reid and Global actually had the NDP one point ahead of the Conservatives with 37% support.

This allows the NDP to attempt to position themselves as the strategic, safe progressive alternative to the Conservatives, a strategy that is not without its risks as I touched upon last week.

But Horwath certainly looks to be benefiting from a series of possibly fatal self-inflicted wounds by her opponents and is perhaps becoming the default option for many who find they have nowhere else to go.

Not a bad place to be at this stage.

The public may simply be too tired of the Liberals to consider them, and with another party promising to deliver essentially the same programs -- in some cases in a more robust way, in others differing either slightly or slightly for the worse -- without the same faces and the history, it could be their time is up.

While I do not share his overall ideological perspective Adam Radwanski in the Globe and Mail had a pretty good take on why Horwath may be able fend off the attacks on her by her opponents in his piece:  Why the usual questions about the Ontario NDP’s competence are being set aside

Speaking of self-inflicted wounds, one that Horwath has brought upon herself is the recent questioning of the NDP's math and budgetary plans due to what was a $1.4 billion annual error in the party's platform.

That being the platform that the NDP and Horwath repeatedly have sought to portray as fully costed and fiscally responsible, displaying a long-held and terribly self-defeating desire by mildly social democratic parties to appear as sound and reliable managers of the bourgeois state.

When you propose a fairly milquetoast, liberal platform that is so similar to the actual Liberal platform that you need a combination of a terrible Conservative leader and a titanically unpopular Premier to get your chance, it is easy to get tripped up by such minutiae. Especially given that it is the NDP themselves who have elevated it to importance with their fetishistic obsession with such neo-liberal policy detail that always proves to be fiction anyway.

Fortunately for them the public could be ready at this particular moment in time to get behind a liberal policy agenda without the Liberals as stated above. If a shift like that is occurring, these voters will likely not care about the error, especially given that Ford throws fictional numbers around daily as well as the long Liberal history of outlandish spending scandals and debacles.

Ontario's Communist Party leader Dave McKee gave a terrific speech that touched on a number of important points when they launched their campaign in Toronto May 12. I reported on that launch already, but the speech has now been posted and it is definitely worth a listen.


Further news/article of interest about the campaign:

Ontario parties are ducking the issue of public auto insurance

Posted by Michael Laxer at 9:00 AM