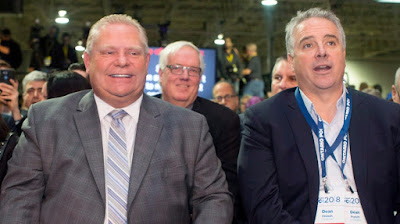 It speaks volumes when the historic organ of Canada's business class, The Globe and Mail, deigns to pronounce on the instability wrought by a newly elected right wing government that should be the stuff of Conservative wet dreams.

After the ever accelerating trash panda fiasco that is Doug Ford's farce pantomime as Premier started to touch rock bottom this week the Bay St. titans hit the chicken switch Wednesday opining:


Enter Ron Taverner, Mr. Ford’s long-time family friend and choice to head the Ontario Provincial Police. On Tuesday, OPP Deputy Commissioner Brad Blair, the interim chief of the force, asked the provincial Ombudsman to investigate the many irregularities in the process for selecting a new top cop at the OPP. Deputy Commissioner Blair added to the growing list of questionable government actions, alleging that Mr. Ford’s office asked police to purchase “a large camper type vehicle” for the Premier’s use, without public tender, and off the books.
Alleging political interference with policing, conflict of interest and possibly law-breaking, Deputy Commissioner Blair has hired a lawyer and effectively become a whistleblower against the sitting government.
This is unprecedented and it’s the latest situation that leaves Ontario looking like a banana republic. The implications are ominous for the province’s economy. Companies rely on the integrity of contracts, freedom from government meddling and the rule of law. If Mr. Ford truly wants to make Ontario open for business, he should try a few of those ideas on for size.

Now, of course, leftists do not really care much about the desire of corporations to be free "from government meddling" but the broader point is that Ford's meddling is not about standing up "for the people" as he likes to claim nor is it even about Ontario being "open for business" which is the sad little slogan he has trotted out for his buddies like Rocco Rossi acting as bootlicks for the capitalist class.

All his entire narrative has been about is fulfilling the fantasies of and settling the scores of a failed Toronto mayor wanna-be.

Doug Ford sees "governance" through the lens of an entitled rich boy having a toddler tantrum. While left critics are absolutely correct that he is beholden to corporate interests (including, of course, his own) and that he is launching a vicious austerity agenda that includes relentless attacks on workers, people living in poverty, women and racialized and marginalized communities there is both more and less to him than that.

Ford is the typical example of the ugly, petty, tiny-minded class of the pseudo-entrepreneurs who actually inherited mommy and daddy's money.  Everything has been handed to him on a silver platter, he has evaded any responsibility for any misdeeds, he has always succeeded through bully-boy intimidation and grandstanding and while for now the gutless crop of useless twits that populate his caucus have been cowed into line they must be getting restless knowing that the slaughter is surely approaching as long as their commander-in-chief remains so singularly blind to his own self-destructive path.

I am not much for the fake niceties of bourgeois governance but Doug Ford should have looked into them as they do really mean him and his asshole sidekick Dean French -- who seems to think having watched Goodfellas a few times he understands negotiations -- are digging his administration's early grave with their needlessly petty and borderline illegal antics.

Seriously, just how stupid can you be? These guys would win any award easily.

The tiny upside is that just a few months into a government that has launched full frontal attacks on workers, women, civil society and racialized and marginalized communities this terrible agenda may be derailed at least for a time by the antics of an imbecile who was unable to contain his basest instincts when he felt he had finally been handed the keys to the family rec room with the old-school basement bar that his loser fiends were all sitting at sure that he would lead them as pigs to the trough.

See also: Chaos Theory: For Doug Ford disruption will be the plan

Posted by Michael Laxer at 8:03 PM