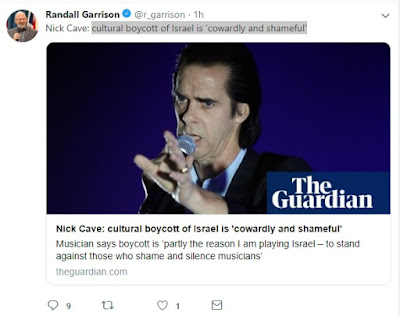 The shameful blindness of the NDP towards the vicious oppression of the illegal Israeli apartheid occupation of Palestinian land continues in all its hypocrisy.

In the last week alone the Israeli apartheid "Knesset approves 200 communities where Arabs are banned" and we learn of "Netanyahu’s Negotiating With Neo-Fascists for a ‘Consensus View’ of the Holocaust".

The party keeps ignoring a call from dozens of party activists to withdraw from the Canada-Israel Interparliamentary Group.

Yet Randall Garrison -- federal NDP critic for national defence and LGBT issues and an alleged defender of human rights -- tweets that the cultural boycott of Israel is what is 'cowardly and shameful'.

The NDP keeps telling people what it is. Again people need to start listening.
Posted by Michael Laxer at 9:13 PM